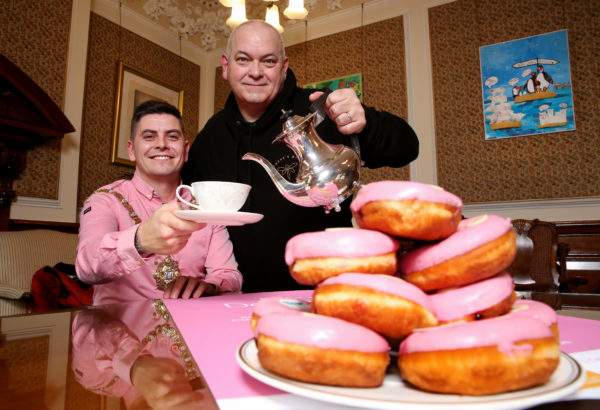 THE father of a young West Belfast cancer battler, who passed away last year, has helped launch the ‘Donuts for Donors’ appeal, the North’s first ever Stem Cell Donation Awareness Day.
Seán Smyth, whose daughter Eimear Gooderman (née Smyth) died on the 27th of June 2019, was joined by the Lord Mayor Danny Baker for the appeal launch a City Hall on Tuesday.
In September 2016, Eimear was diagnosed with stage two Hodgkin’s Lymphoma, a type of blood cancer.
After finding a stem cell donor match, Eimear underwent a transplant in November 2018, but sadly passed away following complications.
Throughout her illness, the Coolnasilla woman fought to raise awareness of stem cell donation alongside her family, who established the Eimear’s Wish campaign to continue her work.
Speaking to the Andersonstown News, Seán explained the idea behind the Donuts for Donors appeal, which will take place next Friday.
“The most important thing here is getting the message out that we need people to become stem cell donor and organ donors,” he said.
“We want our politicians to fall into line with England and Wales and bring in the soft opt out where everybody is a donor, and if you don’t want to be a donor then you need to opt out.
“This is our first ever Northern Ireland-wide Stem Cell Donation awareness day and Eimear loved donuts and coffee, so we married the two together.
“We have raised three or four thousand pounds for charity since Eimear died – maybe more – and we just don’t ask people for money. We try to organize events to give people a reason to put their hands in their pockets, so we thought ‘why don’t we do Donuts for Donors – get them to buy a donut, get them to have a coffee morning in their workplace.
“The money is going to fantastic charities; Action Cancer, Friends of the Cancer Centre and the Anthony Nolan Trust. That way we’re hoping to raise a few pound.
“Our percentage of donors is very low, so it’s also about getting people talking about and become aware of it.”
To mark the occasion on Friday, January 31, City Hall will also be lit up pink, which was Eimear’s favourite colour.
Local businesses and schools will also be involved including West Belfast’s All Saints College and St Louise’s Comprehensive College.
Speaking ahead the event, Councillor Baker encouraged everyone to get the kettle on and pick up a donut to help raise much-needed funds and awareness of stem cell donation.
“This is a very important initiative which is helping to shine a spotlight on the important topic of stem cell donation and organ donation generally,” he said.
“The team at Eimear’s Wish have worked tirelessly to keep the spirit of Eimear alive and continue her great work by making stem cell donation an important topic of conversation.
“On Friday 31 January I will be hosting a special coffee morning in the Parlour for people and families affected by stem cell transplants and I’m calling on everyone across the city to follow suit and get involved for this great cause.