Dunlop predicts a better than ever Tennyson in Boston 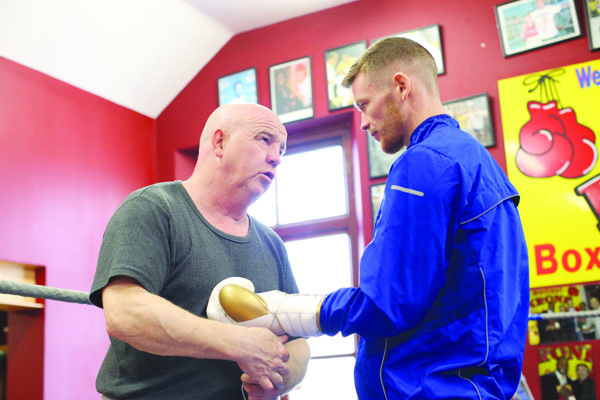 WITH just over four weeks to go until James Tennyson challenges Tevin Farmer for the IBF super-featherweight title at the TD Garden in Boston, his trainer, Tony Dunlop says that they are right on track to produce a stunning performance on the night.

October 20 will close in fast for ‘The Assassin’, but the 25 year-old Poleglass banger was looking in sensational shape as Dunlop put him through his paces at an open workout in the Kronk Gym on Monday.

The thuds and thumps as Tennyson unleashed his monstrous power shots onto the pads held by Dunlop reminded all in attendance just what a huge puncher he is if any reminder was needed, given 18 of his 22 wins have come inside the distance.

The latest victory over Martin J Ward back in May – a thrilling fifth round stoppage – saw Tennyson add the European and Commonwealth belts to his collection and catapult him into this world title fight next month and Dunlop says he believes his charge has improved again since that career-best victory.

“This is a wonderful opportunity,” Dunlop agreed as their gym session wound up.

“Winning the European title against Martin J Ward was a big upset for most people except us.

“James is coming on very well physically. He’s very strong and improving every time because he turned pro very young. I have seen the improvements in him and this title fight has come along at the right time.

“He’s just turned 25 and I think he is going to win this title.

“What you saw in the last fight (against Ward), you won’t see this time because he’s improved an awful lot since then.

“Pound-for-pound, I’d say he’s one of the hardest punchers in Europe at the minute and you will see it in this fight.”

Dunlop has been in Tennyson’s corner throughout his pro career after his switch from the amateur ranks and St Paul’s ABC aged just 18.

The Kronk coach says he knew all about what he was about to work with having watched the young West Belfast man throughout his teens and feels he is now starting to show his true potential.

“I saw James boxing as a kid, 10 or 11 years of age and always knew he would have world-class ability,” he added.

“When he turned pro with me at 18, I knew I had a really hot prospect that nobody knew about because he didn’t compete at the Olympics or a Commonwealth Games.

“He started of sparring some class pro’s and has come on. He was only a wee boy to start off with, but he’s turning into a man now and his punching power is improving.”

Between them, fighter and trainer have cultivated Tennyson’s aggressive, all-action style that has won many admirers of late. Yet they have had to do it the hard way, building his career on the small hall circuit and having to bounce back from two career defeats.

Every day is a learning day and that is how they have dealt with adversity, returning to the super-featherweight division following an ill-fated British title challenge to Ryan Walsh and have strung six impressive wins together since.

“James has always been one to stalk his opponents and he is a real fighter,” Dunlop stressed.

“He has the style people love to see because he’s exciting. He’s a phenomenal puncher and stalks his opponents.

“He may give a few rounds away at the beginning as he can start a bit slow, but once the engine starts and he gets into the seventh or eighth round, he’s only starting.

“He is a force to be reckoned with and he’s up to world class now at 25.

“He’s done it the hard way, fighting in the Devenish, but we have got here and it’s been a real team effort. All we have to do it pot the black ball now.”

It sounds simplistic, but that confidence comes from what they have worked on in the gym to date.

They are confident of victory, but certainly not arrogant as they know they have a difficult task on their hands against Farmer who, like Tennyson, has had to do things the hard way having lost three and drawn one of his first eight pro contests.

The American is greatly improved since and having won the title against Billy Dib in August, will not be keen on relinquishing it just yet.

“He’s very slick and he’s done really well to come back from early (career) setbacks himself. Farmer is strong and a very talented boxer.

“He’s a good counter-puncher, very smart and he’s improving every time too.

“His main strength is his boxing ability – he’s very slick.

“He’s adopted Mayweather’s style, but I’ve seen a few weaknesses. This is going to be a great fight, but I think James will do it.”

With the clock ticking towards their date with destiny, everything is on course according to Dunlop and that was evidenced by Tennyson’s excellent shape and performance on the pads.

Sparring will continue until they depart for Boston on October 11 and Dunlop believes his man will be primed to become Belfast’s latest world champion when the bell rings nine days later.

“Everything is perfect,” confirmed the vastly experienced coach.

“No complaints whatsoever at this stage. We’ve done a lot of sparring, but not too much. At this stage the only thing you worry about is over-training and I’ll be making sure that doesn’t happen.

“He’s very fit as it is, but we won’t be getting too excited just now. Come fight night, he’ll be a real fighting machine and the Americans will love this kid.”