EMERGENCIES ONLY IN RVH FOR 24 HOURS 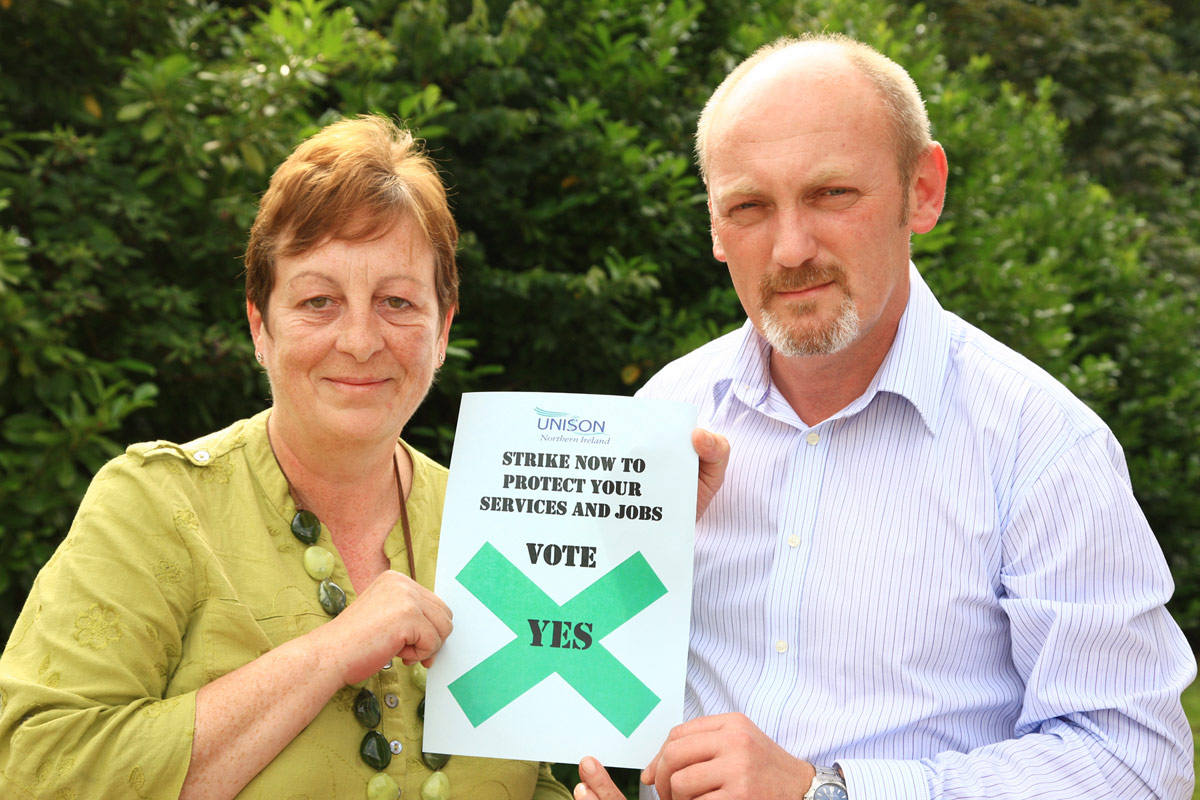 DURING next week’s 24-hour strike, the Royal Victoria Hospital will be limited to dealing with “emergencies only”, union officials have said as final plans for the one-day action are made.

Health Service union Unison, whose members make up around half of the RVH’s 6,000-plus workforce, unanimously voted in favour of the strike action next Wednesday, which will affect health trusts across the North.

Speaking to the Andersonstown News ahead of the walk-out, Ray Rafferty, Unison’s Royal Victoria Hospital Joint Branch Secretary, called on the people of West Belfast “to join us on our picket lines to protect the services that they rely upon”, but stressed that patient care “would not be compromised” during the strike action.

THE Royal Victoria Hospital will be limited to dealing with “emergencies only” next Wednesday as upwards of 3,000 staff members take part in a 24-hour strike action in protest at Health Service budget cuts.

Health Service union Unison, which represents 3,000 of the Royal’s 6,500 employees, unanimously voted in favour of the strike action, which will affect health trusts across the country. The strike is being staged in protest against stringent cuts the public sector budget in Northern Ireland over the next four years to cope with a claimed shortfall of £828 million.  The cuts could lead to the loss of 4,000 jobs.

The strike begins on at midnight on Tuesday, October 4, and ends at midnight on Wednesday, October 5. Speaking to the Andersonstown News ahead of the walk-out, Ray Rafferty, Unison’s Royal Victoria Hospital Joint Branch Secretary, called on the people of West Belfast “to join us on our picket lines to protect the services that they rely upon”, but stressed that patient care “would not be compromised” during the strike action.

“What we do foresee as far as the impact of the strike is concerned is that it will not be business as usual,” explained Mr Rafferty.

“You will probably see the closure of outpatient clinics and the non-availability of elective surgery (surgery that’s been booked in advance) over a 24-hour period at the Royal. We anticipate that there will be picket lines out at all the entrances of the hospital site. There may be a slowing down of traffic getting past those but we would intend to give information and literature out to the public so that they know and understand why we are taking this action.  As far as the hospital itself is concerned we anticipate that it would be the same as bank holiday services, which would be emergency services only.  We’re trying not to inconvenience the public, but we need the public to be made aware that unless we take this action and unless we have their support then these services will be cut and they won’t be there for the public in future.

“The most important thing as far as we’re concerned is that emergency services will be provided. Our primary concern is for the safety of the patients and we will be ensuring that emergency cover is provided.  If anyone turns up and needs an emergency operation or treatment,they will get that treatment.”

Mr Rafferty said that Unison predicts that all its RVH members would be involved in the strike action “in one way or another”.

“Not all the members will necessarily be on strike as we will be providing emergency cover, but we would be asking our members to come out and be part of the picket line on their tea breaks and lunch breaks,” he said.

“I would sincerely hope that the other unions in the Royal would come out and strike with us in solidarity.  I know that the indications from some of the trade unions is to ask their members not to cross our picket lines or not to carry out any of the jobs or functions that our members on strike would normally do.”

Fellow Joint Branch Secretary Catherine Harte said over 91 per cent of Unison members balloted in the Belfast Trust area alone voted for the action, but added that, even so, the union “did not take this action lightly”.

“We are not opposed to change but unless we have investment in primary care, which we do not have at this present time as we have no programme for government, then it’s going to have a knock-on affect with job losses and a knock-on effect in society,” said Ms Harte.

“Next year’s round of cuts is not only going to cut thousands of jobs, it’s also going to cut an awful lot of services that the people of Northern Ireland absolutely rely upon.  If we cut thousands of jobs that will close hundreds of beds and entire departments close down.  Can we all afford to pay privately?  The majority of people in Northern Ireland cannot afford to pay for private health care.

“We are attempting not only to secure jobs within our Health Service but secure the Health Service itself so that there is care at the point of entry for everyone whether they can afford it or not. It’s about protecting services for the operations and treatment that people need, for the home help services, everything.”

Mr Rafferty said that services at the Royal were being limited to emergencies only “because if the government has its way potentially that’s where the Health Service is going to end up anyway unless you can afford to pay for it”.

“This is to make the public realise that the service really is in danger and that we need to make a stand but need the public to support us,” he said.

“We would ask the public to join us on our picket lines to protect the services that they rely upon.  We’re looking to make a stand which is publicly seen and publicly acceptable.”

Ms Harte described a recent mini-crisis at the Royal’s A&E department during a Saturday morning when reduced staffing levels led to a waiting time of nearly 10 hours.

“There were four nursing staff on duty and two support staff,” she explained.

“Three of staff were on majors, which is ‘resuscitation’, and there was a nine-and-a-half-hour waiting time. Now that is before the closure of Belfast City Hospital A&E, so what’s the waiting time going to be when City A&E actually closes down in November?”

“If you take the City, with 50,000-odd attendances per-year and close that and add that number to the attendances of both the Mater Hospital and the Royal, probably those waiting times will go from nine and a half hours to 15 hours. The people who will suffer most from this are the patients that are left waiting 10 and 15 hours who need urgent treatment.”

The union representatives said there was “an unwillingness” from the Trust and the Health Department to discuss the issues at hand.

“The only thing there’s been has been unhelpful comments from the Minister saying that we have not spoken to him, yet I was in a meeting with him two weeks ago,” said Mr Rafferty.

“These cuts do not just affect those employed in the Health Service, they will affect the health and wellbeing of everybody in West Belfast.  What we’re asking people to do is realise that this is their healthcare, that this is their health in the future at stake.  We need their support to stand up and say we’re not prepared to be walked on, have our services stripped off us and pay, if we can, in the future for treatment.

“We need the people of West Belfast to help and support us and to protect the services in the Royal.”

A spokesperson for the Belfast Trust said: “Our Trust respects the role of trade union colleagues and has been officially informed, along with other trusts, of the plan to take industrial action on October 5.  We will be meeting with trade unions to agree arrangements which will ensure that we continue to provide services to our patients and clients.”

The Health Minister, DUP MLA Edwin Poots, said he was “deeply concerned and very disappointed” by the decision to strike.

“I believe this action will be counter-productive and will cause unnecessary disruption to our Health Service. We all want a better Health Service but taking strike action which will affect patients and staff is not the best way to achieve this,” he said.