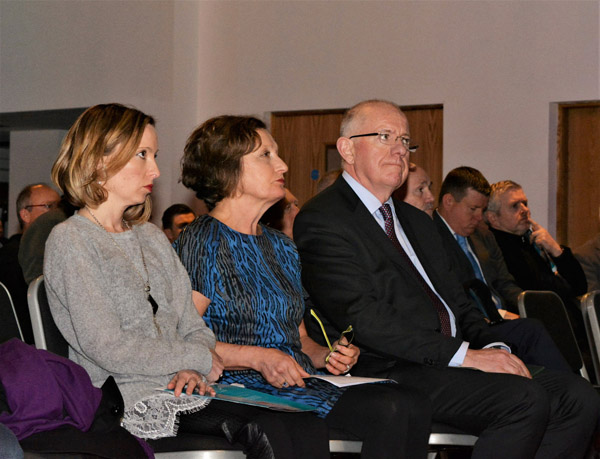 TOGETHER: Pat Finucane's daughter Katherine and wife Geraldine sit with Irish Minister for Foreign Affairs Charlie Flanagan at the Pat Finucane Lecture held in the Europa Hotel pic by @antrimlens

THE wife of murdered Belfast solicitor Pat Finucane has said the support of the community has kept her and the family going in their campaign for a public inquiry into her husband’s murder.

Geraldine Finucane was speaking at the annual Pat Finucane lecture held in the Europa hotel on Thursday night which this year was delivered by Irish Minister for Foreign Affairs Charlie Flanagan.

She said that the last 28 years had been very hard but they were determined to fight for a public inquiry and referenced the “unwavering support” the family had received from the community.

“I see many people here tonight who have stood with us for all of those three decades, helping us out, urging us on. I meet them often at events such as this or just when I’m out and about on my daily business. I am constantly approached by people who wish me and my family well and they tell me we are doing good work.

“Some people even tell me that they have known tragedy in their lives but were unable to follow through on it for various reasons but they gain comfort and some degree of closure by knowing that someone is holding the British state accountable for their actions. Everyone ends by telling me the same thing – ‘keep going, it’s important’.

“This is why we do what we do. This is why we keep going. It isn’t easy. Many times over the years we have felt like we have no more left to give, like we are fighting an unbeatable enemy, like the obstacles before us are insurmountable. It is times like these that my family take strength from two things. One is the path that lies behind us which helps us put the obstacles ahead into perspective.

“Because of what we have uncovered the High Court in Belfast now declares as a fact that Pat’s murder was an abomination and that it amounted to the most conspicuously bad glaring and flagrant breach of the obligation of the state to protect the life of its citizens.

“Of course, this is not the first time there has been official recognition of the true nature of Pat’s murder. Others have said similar things over the years. But I believe the statement of Mr Justice Stephens in the High Court in Belfast is significant. It’s where Pat worked, where he plied his trade, where he represented his own people, and it is perhaps the recognition that would have brought him the most satisfaction because convincing people in your own back yard is often more difficult than anywhere else.

“However, we did not have to convince everyone that we were right and this is the second thing that keeps us going, that people believed us right from the start. People knew there was something rotten in the British state and they have supported us for many years – Pat’s friends, Pat’s community, Pat’s own people. We have been encouraged and supported and helped by so many people when the going got tough and the reason we keep going and can keep going is because of all that help and support and because there are so many people who want us to. There are so many people who like us want to find out the truth behind Pat’s murder.

Irish Minister for Foreign Affairs Charlie Flanagan said the Irish government would continue to support the family’s calls for a public inquiry.

“As a solicitor myself, I remember the shock which the murder of Pat Finucane, and later of Rosemary Nelson, caused amongst the entire legal profession on this island. As with any murder, these killings visited tragedy upon families and violence upon society; but this was further amplified by the chilling sense of an attack on the law itself.”

He said the British Government would be held to its commitments.

“The firm view of the Irish Government remains that a satisfactory outcome to this case will best be achieved through a full public inquiry. I want to underline that this is not about making a special case of one victim but rather about the importance of honouring commitments made – in this case by the British Government at Weston Park – almost 16 years ago.”

He continued: “The constancy of Geraldine Finucane and her family in honouring the memory of Pat Finucane, and in seeking truth and justice on his behalf, should renew our determination to finish the job set out in the Good Friday Agreement almost two decades ago and to now establish the legacy institutions for dealing with the past. To honour our commitments to the victims and survivors and for the benefit of wider society. That time is now.”