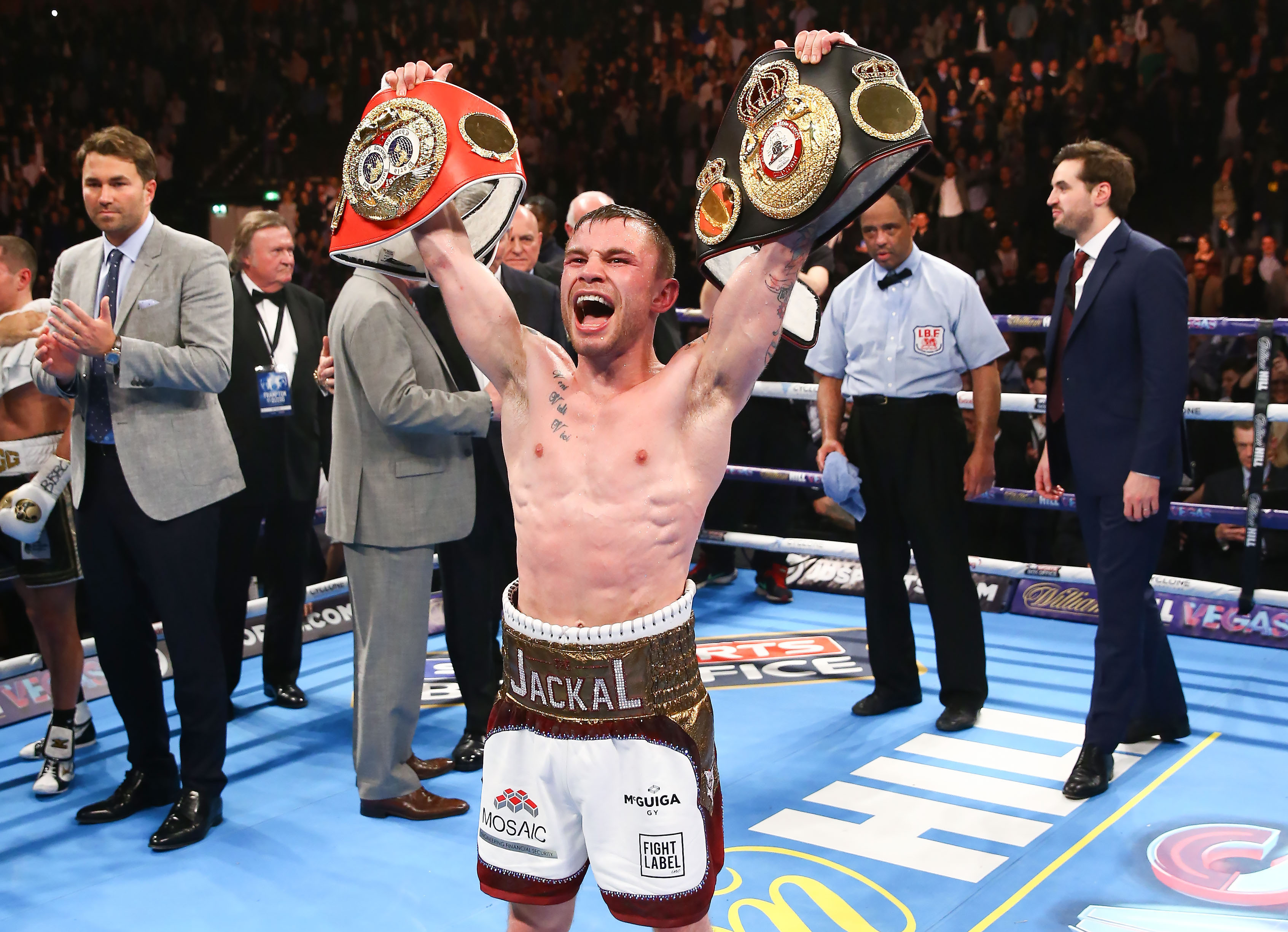 CARL Frampton created a piece of history on Saturday night when he became the first Irish boxer to unify world titles, writes David Mohan from the Manchester Arena.

'The Jackal' took a split decision victory over Scott Quigg to add the WBA super-bantamweight title to his IBF crown at a raucous Manchester Arena that was transformed into a little corner of Belfast for the night.

While the decision on paper may have appeared to be close, in reality Frampton won well, controlling the majority of rounds before a late Quigg rally saw the Bury man narrow the gap. However, a strong finish saw the Tigers Bay man confirmed winner with judges Carlos Sucre and Dave Parris both scoring it  116-112 in his favour while Levi Martinez somehow sided with Quigg 115-113.

"I couldn't believe one of the judges [gave it to Quigg]. I didn't even think it was close," said Frampton after his win.

"He came on a bit at the end, but I thought I won the first seven rounds by doing very little.

"Initially I did [get a scare when cards were announced] then I thought there would be no way two of them would have it so wrong, but I felt I won the fight."

It was certainly Frampton's night on what was an unforgettable night, if a fight to forget.

As expected, it was the visiting fans who greatly outnumbered and out-shouted the Lancashire legions, with the noise level leaving many shocked at the level of support.

When Frampton entered the arena to the strains of Simple Minds' 'Belfast Child', Belfast’s favourite son strode to the ring with confidence.

The level of excitement and hype led many to believe this contest would explode into life from the off, but it wasn't to be the case.

Instead, after a quiet opening round, Frampton took control, pawing out the jab against an opponent who seemed reluctant to exchange and was constantly on the back foot.

The Englishman admitted after that an uppercut in the fourth left him with a suspected broken jaw and that forced him to employ a safety first approach until the injury settled down.

"I thought the first four or five rounds were like a bit of a chess match. I felt in control," claimed the Bury native.

"He was probably a bit busier, but nothing was landing and I could see everything he was throwing. I was catching everything, but I think it was at the end of the fourth round he got me with a peach of an uppercut that has done my jaw.

"I had to reevaluate what we were doing then and be a bit more careful to make sure everything was fine.

"I took round five off a bit and then started thinking about going through the gears, but maybe I left it a bit late."

He certainly did just that, as by the time Quigg began to try and force the issue, the majority of observers felt he needed a stoppage to win as the cautious approach at the start left him with a mountain to climb.

As the fight moved into the championship rounds, it finally began to open up with both men trading up close, landing power shots downstairs and in the 11th Quigg seemed to be taking a firm grip on things.

However, before the fight it was felt that Frampton could make the better adjustments and he did just that in the 12th, landing a flurry and controlling the distance and pace as the decision was left in the judges' hands.

After a slight scare when the split decision was unexpectedly announced, the right man got the nod to send the huge travelling support into delirium.

"To be honest I knew it was going to be a bit of a boring fight and that's how it would play out," said Frampton at a packed press conference afterwards.

"You can't really say that when it's a pay-per-view fight because nobody would buy it.

"I knew it would be tactical for the first five or six rounds, but it opened up at the end.

"I just want to chill out for a few days now, put the feet up, turn the phone off and eat some proper food."

Elsewhere on the bill, Ryan Burnett claimed the WBC International bantamweight title with a points win over Anthony Settoul.

Conrad Cummings also enjoyed a victory, defeating Victor Garcia, but there was no joy for Marc McCullough or Luke Wilton who lost to Isaac Lowe and Charlie Edwards respectively.