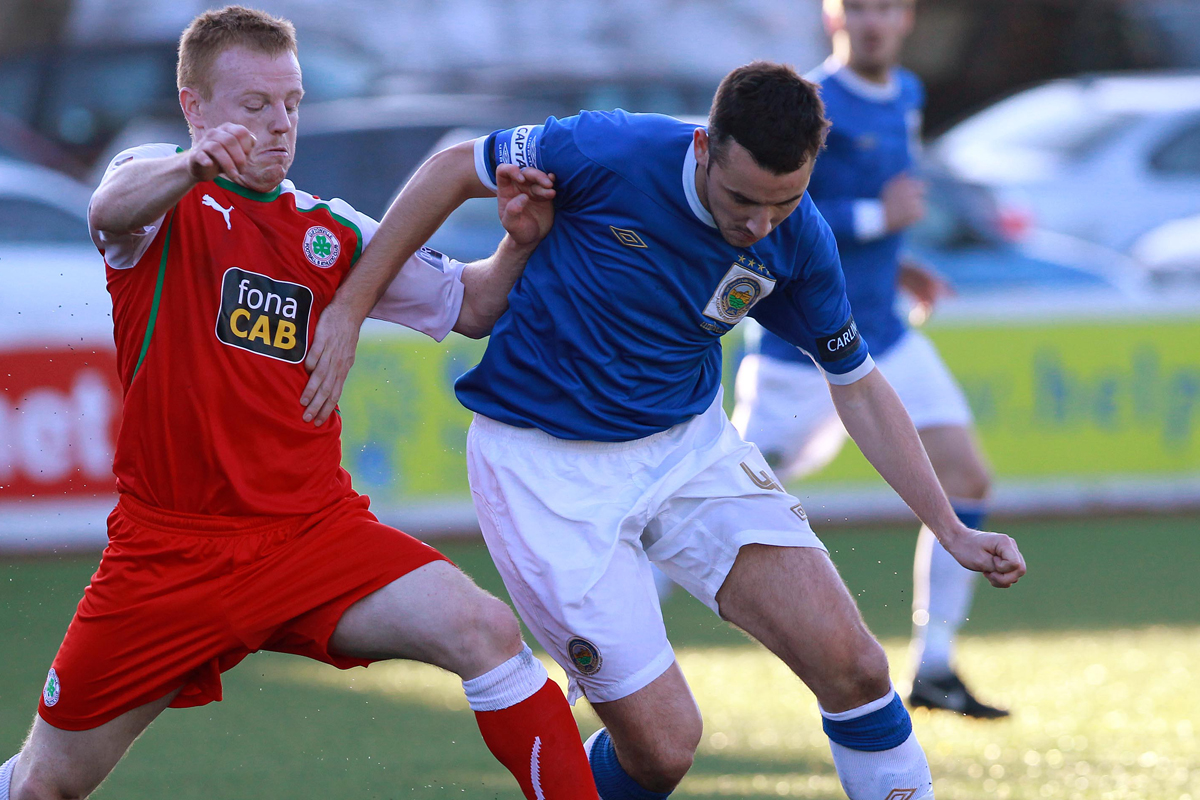 Linfield comfortably progressed into the semi-finals of the Irish Cup with a comprehensive 4-0 victory over Championship 2 leaders Coagh United.

However, there is great confusion as to who the cup holders will be up against in the next round due to a potential registration blunder from Ballymena United.

The Braidmen defeated Newry City 2-1, but there appears to have been a registration problem with striker Alan Davidson, who struck the winning goal for Glenn Ferguson’s side. United believed they had clearance to play the player. The IFA has yet to make a ruling on the case.

Ballymena now have to face up to the prospect of elimination, with Championship outfit Newry City possibly replacing them in the draw.

The Blues face no such worries, however, and instead were giving a toast to hit man Peter Thompson who notched up another hat-trick for his beloved club.

Thompson’s three goals meant that in 33 appearances in the Irish Cup, he has scored an incredible 35 times – including six times in finals. This is a truly remarkable feat and is a true credit to a player who is famed for his predatory instincts and incredible work rate.

Thompson wasn’t the source for the first goal of the match. Instead, it was midfielder Philip Lowry who broke Coagh’s resistance in the 26th minute. His guided header from Mulgrew’s corner was his 13th goal of the season.

Two minutes later, Thompson followed up on the visitors’ goalkeeper Yorke’s spilling of Fordyce’s long-range shot to net his first.

The former Stockport County striker went on to notch a further two neat finishes in the second half to complete his hat-trick.

The Blues will then face either Ballymena United or Newry City on Saturday 31 March with the venue yet to be decided. Last season’s losing finalists Crusaders will take on the winner of the replay between Donegal Celtic and Dungannon Swifts in the other semi-final.

At the conclusion of Saturday’s match, Linfield announced that captain Michael Gault would be extending his contract at the club for a further two years, expiring in May 2014.

The club also announced that Gault has been granted a testimonial year in 2013. The combative midfielder made his debut for the Blues in 2002, and was installed as captain at the start of the year following the retirement of Noel Bailie.

This is excellent news for the Irish League champions and is much deserved for Gault, who has been on a fantastic run of form lately.

On Monday night Linfield drew 1-1 with Derry City in the first leg of their Setanta Cup quarter-final tie at Windsor Park. Peter Thompson scored the Blues’ goal. The second leg will be played at the Brandywell on Tuesday 20 March.

David Jeffrey’s side return to league action on 10 March with a home tie against Carrick Rangers.

This starts a run of three matches leading into the split between the top and bottom halves of the division. Linfield will also play Donegal Celtic at home on St Patrick’s Day and face an away trip to Lisburn Distillery the following weekend.