Irvine hoping to seal his place in Rio 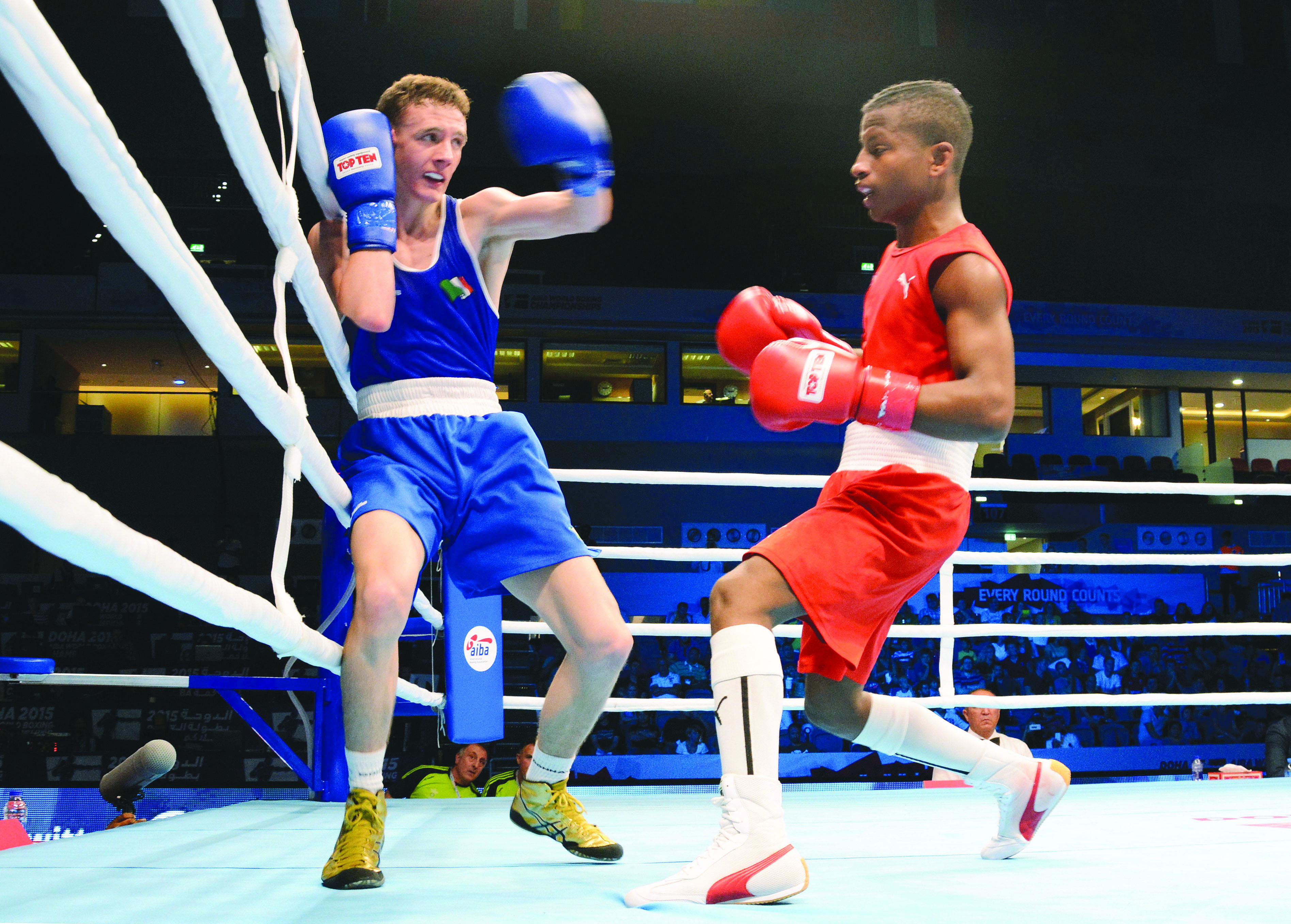 Brendan Irvine tangles with eventual 49kg winner, Joahnys Argilagos during last year’s World Championships in Doha. Irvine steps up to 52kg for the European Olympic Qualifier in Turkey where he will be seeking to seal his place in Rio Mandatory Credit ©INPHO/Francis Myers

A PLACE at this summer’s Olympic Games in Rio de Janeiro is the prize on offer for Brendan Irvine as the Glencolin man prepares to take part in the European Olympic Qualifying Event in Samsun, Turkey that begins on Saturday.
At the end of eight days, three boxers from each male weight category (two finalists and the winner of a third-place box-off between beaten semi-finalists) will know they are bound for the Games and Irvine forms part of a nine-strong male and female Irish team with qualification in mind.
Paddy Barnes (light-flyweight), Michael Conlan (bantamweight), Steven Donnelly (welterweight) and Joe Ward (light-heavyweight) are already qualified, so therefore the Irish team includes hopefuls from different categories with Irvine stepping up to the 52kg division having won the Irish Elite title at flyweight with victory over TJ Waite in December.
In last year’s World Championships in Doha, the St Paul’s man boxed at light-fly where he reached the quarter-finals only to lose out to eventual winner, Joahnys Argilagos of Cuba – a man he has beaten in the past.
“There are a lot of good lads who have qualified and another lot yet to qualify,” said Irvine of his European rivals.
“I just trust in God that I can get across the line.
“Even at the World Championships I was at 49 kilos, but the lad I beat in my first fight 3-0 (Nico Hernandez) qualified there through the Pan American Games.
“That just shows the level you are at, so if he can do it then there is no reason I can’t.”
Certainly, ‘Wee Rooster’ should be brimming with confidence given his seamless transition into the Elite ranks.
A silver at last year’s European Games confirmed his arrival so he will certainly feel a top three finish in Turkey is well within his reach.
“Hopefully this all goes well. I’ve been working hard over the past few months in the build-up to this,” reports the West Belfast man.
“I’ve just been looking to sharpen up a bit more and make sure I peak at the right time.
“The camp has gone well although it’s been tough physically and mentally with being in Dublin most of the time.
“It’s been hard but I’m hoping it will pay off in the long run.
“You always have doubts that come into your head, but you have to stay positive.
“You have to believe you are going to get there and not to let anyone tell you any different. I’m trying to claim my spot for Rio, so it’s all or nothing.”
The Irish team completed their preparation with a camp in Assisi, Italy and having moved up three kilos in weight, Irvine says he is feeling great ahead of the competition.
“I’ve been cutting the weight over the past few weeks and where I am sitting is not too light or heavy,” he revealed.
“Everything is perfect at the moment. I’m grand, eating away at loads of good food so I’m feeling good.”
Should things not work out in Turkey, there will be one final opportunity to qualify for Rio in early June when the final places will be distributed through a World Olympic Qualifying Tournament scheduled to take place in Baku.
However, with the Games just two months later, that would leave little time to make the final adjustments for Rio and Irvine says he wants to complete the job now.
“You just want to have your place booked so then you can really focus on the training,” he insists.
“You really don’t want to leave it to what is a bit of a last minute thing in June.
“If you qualify now then you can have a couple of weeks of then start to get ready physically and mentally so you can make sure you do everything right and leave no stone unturned.”
While Irvine is hoping to seal an Olympic birth at men’s flyweight for Ireland, Michaela Walsh will not get the opportunity to do likewise in the women’s competition in Turkey.
The Irish Elite champion was forced to withdraw due to injury, with Cavan’s Ceire Smith getting the opportunity to seal a place in Rio.
Should Smith’s quest to finish in the Olympic places (both finalists only for women) fall short, then Walsh could get her chance through the Women’s World Championships that will be held in Astana, Kazakhstan next month.