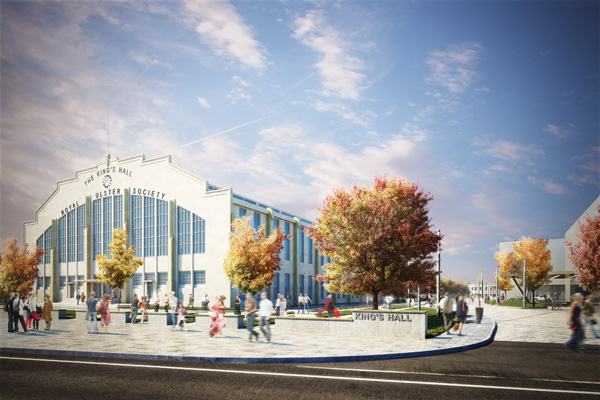 The King’s Hall site in South Belfast is being transformed into a £100m healthcare and leisure development, which is expected to create 500 new jobs.

The residents say they have no objections to the site being sympathetically and usefully developed. However, they are concerned about the potential impact of the site on their area and in particular the potential increase in on-street parking in the Harberton area at peak times. The issue of traffic congestion in Balmoral Avenue was also raised.

Amongst the other issues raised was the extent to which people in the area had been notified of the King’s Hall development, the potential for flooding in the area and the impact on the amenity of neighbouring homes adjoining the site if mature trees are not protected.

Mr Ó Muilleoir has voiced concern about the viability of the development, whether it was appropriate for GP surgeries and pharmacies to leave their current locations and the impact the development would potentially have on existing Lisburn Road businesses. He also called into question whether a multi-storey car-park is appropriate at the Balmoral location.

Speaking after the meeting Cllr Geraldine McAteer said: “This has been a very valuable meeting. It was particularly encouraging to learn that an extensive Environmental Impact Assessment will be carried out in relation to the development.

“The project developers will be required to undertake and submit a formal Impact Assessment which examines the potential impact on traffic, landscape, flooding, issues of historical interest and so on. This is in addition to a community consultation and will be carefully examined as part of Council’s due process if and when planning applications are made.”

She added: “We think it’s important that local people, who will be impacted by the development, are empowered to have access to good, sound information about the planning processes and the opportunity to discuss aspects of plans and express their views. We’re glad we were able to facilitate this meeting and it’s important that residents continue to have their voice heard on this matter.”

“This is a £100m redevelopment which has been carefully considered to bring tangible benefits to the local area and includes assisted living accommodation for older people, a hotel, retail space and other independent healthcare uses and diagnostic services.

“Since May we have been consulting widely with the local community, contacting more than 4,000 South Belfast residents. We have held two public consultation events attended by hundreds of residents and met with a number of individual residents, community groups and elected representatives. To date we have received hundreds of responses from residents of which approximately 78 per cent support, or do not oppose, our proposals.”

He added: “We do, however, recognise the issues raised by a small number of residents. From our wider public consultation, we understand the issues regarding parking and congestion in the Harberton Park and Balmoral Avenue that must be met. The site has two existing accesses from Harberton Park, used during the Balmoral Show and other events, which we will close to through traffic.

“Likewise, the site already has planning permission for over 1000 vehicles, but we plan to reduce this to around 750 surface or multi-storey spaces to meet the needs of those working at or using the healthcare centre. Unlike in the past, were the Balmoral show and other events caused issues with parking and congestion, our detailed application for the King’s Hall and outline masterplan for the wider site must demonstrate to Transport NI how our proposals will maintain a neutral traffic impact within this area.

“We have pro-longed our consultation period to undertake a comprehensive transport assessment, and to review our layout in response to the issues raised during our community consultation. We plan where possible to accommodate the concerns of residents and plan to consult with them further in the near future.

“We recognise the importance of the site to the area, and our proposals will bring forward 500 new or sustainable jobs to this part of Belfast.

“Before submitting any planning applications, we will again be corresponding with those residents who have directly raised issues with us and will make our final proposals known alongside all the consultation feedback that has informed our plans,” he added.