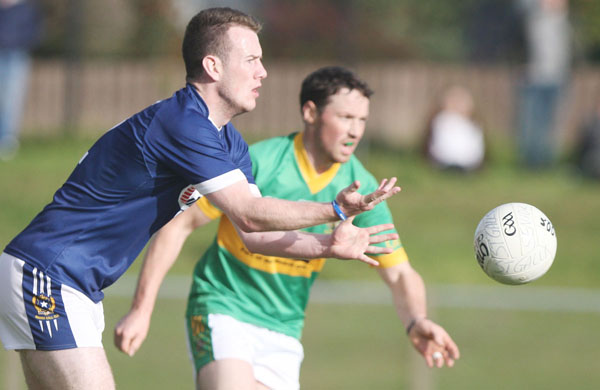 A LATE goal from Ruairi Wilson sealed victory and the league points for St Gall’s on Sunday as they overcame a stiff Creggan challenge at De La Salle Park by four points.

It was quite a defensive game with both sides defending and attacking as units, but both found it hard to penetrate the opposition in a low-scoring affair that only really came to life in the final quarter.

The issue was in real doubt until Wilson found the net on 58 minutes but this simply highlighted that when push came to shove and when things seemed to be going against them, the Milltown Row club were able to come up with the answers.

St Gall’s played with 13 men behind the ball for the most part, with Sean Kelly and Kieran McGourty – listed as corner forwards – dropping back with Kelly – a master at reading a game - sweeping while McGourty played his usual role of linking defence and attack. The pair were their usual outstanding selves while Kevin Niblock at midfield and Terry O’Neill were also on top form.

For Creggan, the Johnston brothers – Ricky and Martin – were also on song while Ruairi McCann put in a fine shift at centre-forward.

This was a slow game to settle with both sides hitting a couple of wides early on before Brendan Bradley broke the deadlock with a free on eight minutes.

The defensive nature of this game meant that clear-cut chances were at a premium with the ball turned over countless times, but it was St Gall’s who were doing this better, getting the flicks, blocks and breaks at the right times as they frustrated their Loughshore rivals.

At the other end, Creggan were just as effective in denying the hosts space but coughed up another free on 13 minutes when Kevin Niblock was fouled and Sean O’Hara tapped over the resultant kick.

Creggan – who were guilty of a number of wides, 13 in total throughout the game – finally got on the board on 15 minutes when Ruairi McCann thumped over a free from distance.

They failed to build on this however as St Gall’s were in the ascendency and after a good break from the right, Brendan Bradley fed O’Hara who in turn passed to Terry O’Neill and the wing-forward split the posts to finish a fine move.

They extended their lead a minute later when Bradley turned scorer this time with a fine point from the right.

This score came on 21 minutes but proved to be the last of the first period as both sides swallowed each other up, denying space and clear openings as the hosts went in at the break 0-4 to 0-1 ahead.

The second half proved to be more of the same initially as the teams failed to cut loose, but St Gall’s did extend their lead on 37 minutes when Bradley kicked an excellent point after being picked out by Niall O’Neill.

Creggan were looking like a team with limited options but they finally began to find a way forward as a Ruairi McCann free followed by an excellent score from Martin Johnston cut the gap to two on 44 minutes.

St Gall’s always had the answer however and it was half-time substitute Karl Stewart who nudged them further ahead when he clipped over from the left after a magnificent ball by Terry O’Neill. Creggan were looking much better despite this and substitute Declan McCann cancelled this point out with a booming score off his left from range.

Two minutes later another inspirational score arrived when Ruairi McCann hit a shot with the outside of his right boot that split the posts.

Suddenly, Creggan’s tails were up and they looked the more likely. This resulted in the equaliser on 50 minutes when Sam Maguire won a break before storming forward and converting to leave the sides locked at 0-6.

However, this was to be their last score as St Gall’s settled themselves, slowed things down and began to play on their terms again.

With space at a premium on both sides, it was going to take a wonder score to push things on and this is exactly what transpired as Niall O’Neill passed to older brother Terry on the right and the finish under pressure from an angle was simply sublime.

A one point lead seemed like quite a lot given the nature of this game as St Gall’s did what they do best, closing space and maintaining possession. It was from one such move that the coup de grace arrived with two minutes of normal time remaining as Ruairi Wilson was played in on goal fro the right and the wing-back showed real composure to cut inside, steady himself and then fire a shot to the roof of the net to secure the victory and ensure his side sit on top of the Division One table alongside Cargin and Lámh Dhearg who all have 12 points.