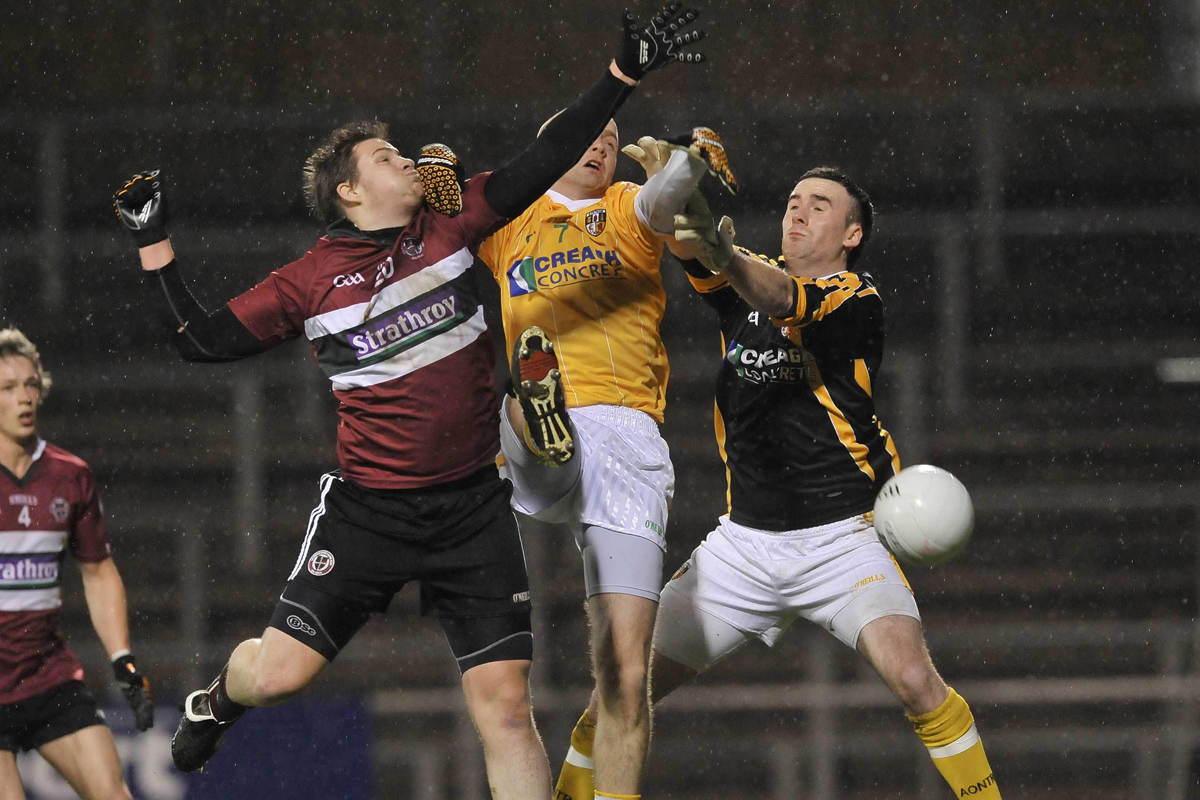 ANTRIM goalkeeper Chris Kerr believes Antrim will set-off on the long road to Tipperary with confidence as they attempt to continue building a solid foundation for promotion from Division 3 of the NFL.

On Saturday, the Saffrons got their campaign off to the perfect start when a last gasp Tomás McCann free sealed victory against familiar foes Sligo at Casement Park.

The win was a testament to character and determination as with 15 minutes to play it seemed to be slipping away from the hosts.

However, having targeted the opening league game, Antrim battled back to secure the points but the St Gall’s clubman believes they must improve if it is to be two wins from two on Sunday against John Evans’ side.

“Yeah it was great to get off to a winning start. We prepared the whole way through January for the 4th of February and it was a relief to get over the line in the end,” admitted Chris.

“Hopefully we can improve on Saturday’s performance and bring it into the game against Tipperary on Sunday.

“From the beginning, the management have installed in us to play to the very end and how important the last 10-15 minutes are in a game.

“This showed on Saturday night when we were 0-10 to 0-7 down, we dug in and grinded out the result in the end.

“We started very well and our work rate and tackling were first class but the scoreboard didn’t reflect the effort that was put in with some wides and shots dropped short into their keeper.

“We also conceded a few soft frees but re-grouped at half time and kicked some excellent scores at vital times.

“It was encouraging to have a good spread of scorers with Tomás popping up at the right time with the injury time winner.”

The 25-year-old returned to the panel after his initial call-up last year and is determined to become first choice between the sticks.

While St Brigid’s Willie McSorley is his rival for the number one jersey, Kerr says he is just happy to be playing and will settle for more quiet nights like Saturday, provided the victories keep coming.

“I was happy that I didn’t have as much to do against Sligo,” laughed the Antrim shot-stopper.

“I’ve been pleased with my performances so far, in the Tyrone and Queen’s games. I’m just happy to be playing games and taking my chance when it comes my way.

“I’m delighted keeping a clean sheet but I think that goes down to how hard the 14 outfield players worked in front of me and didn’t give the Sligo forwards time or space. Long may that continue.”

The West Belfast man revealed there is a real difference in the approach to training and games than was the case last year.

With Liam Bradley having drafted in the new backroom team of Gearoid Adams, Paul McFlynn and Andy Ward, the fresh approach has gone down a storm with the players and Kerr is one who is full of praise for the trio.

“I think the training has been first class with Andy, Paul and Gearoid,” he said.

“There has been a serious step up in professionalism and how things are conducted on the training pitch. Even listening to Andy Ward, when he speaks everyone listens. He has won a Heineken Cup and played international rugby for Ireland so he has played at the top level and won.

“It has been a great appointment and can only benefit us in the long run. Paul and Gearoid have been excellent, they know the game inside out. Everything at training is done with a ball and as a goalkeeper I can’t complain about that.”

With confidence and morale high following the opening night victory, Antrim’s footballers will face a different test on Sunday at the ‘Home of Hurling’, Semple Stadium in Thurles.

The camán code may be number one in the Premier County, but the big ball has made an impact over the last few years with a Munster Under 21 Championship secured in 2010 and an All-Ireland minor title added last September.

The Munster men began their campaign with a disappointing 1-12 to 0-12 defeat to Roscommon on Sunday so will be determined to get their own campaign up and running.

Kerr knows that Antrim will face a tough examination but knows that if they perform to their potential, then they can return north having made it two wins from two.

“We are under no illusions how difficult of a task it is going to be in Semple Stadium.

“We will train hard this week and bring it into the game on Sunday and hopefully have the right result come 4pm.

“The return of Aodhán Gallagher, Mick McCann and Michael Magill for the game on Sunday is a huge boost to the squad.

“Saturday night was a good win but there is still plenty to improve on. We know that it will take an even bigger effort on Sunday to come away with two points so it’s a challenge we are looking forward to.

“We will take each game as it comes and if we prepare right and perform to our full potential, we won’t be too far away.”