OPINION – GERRY ADAMS: If the USA can make voting easy for its citizens why can’t we? 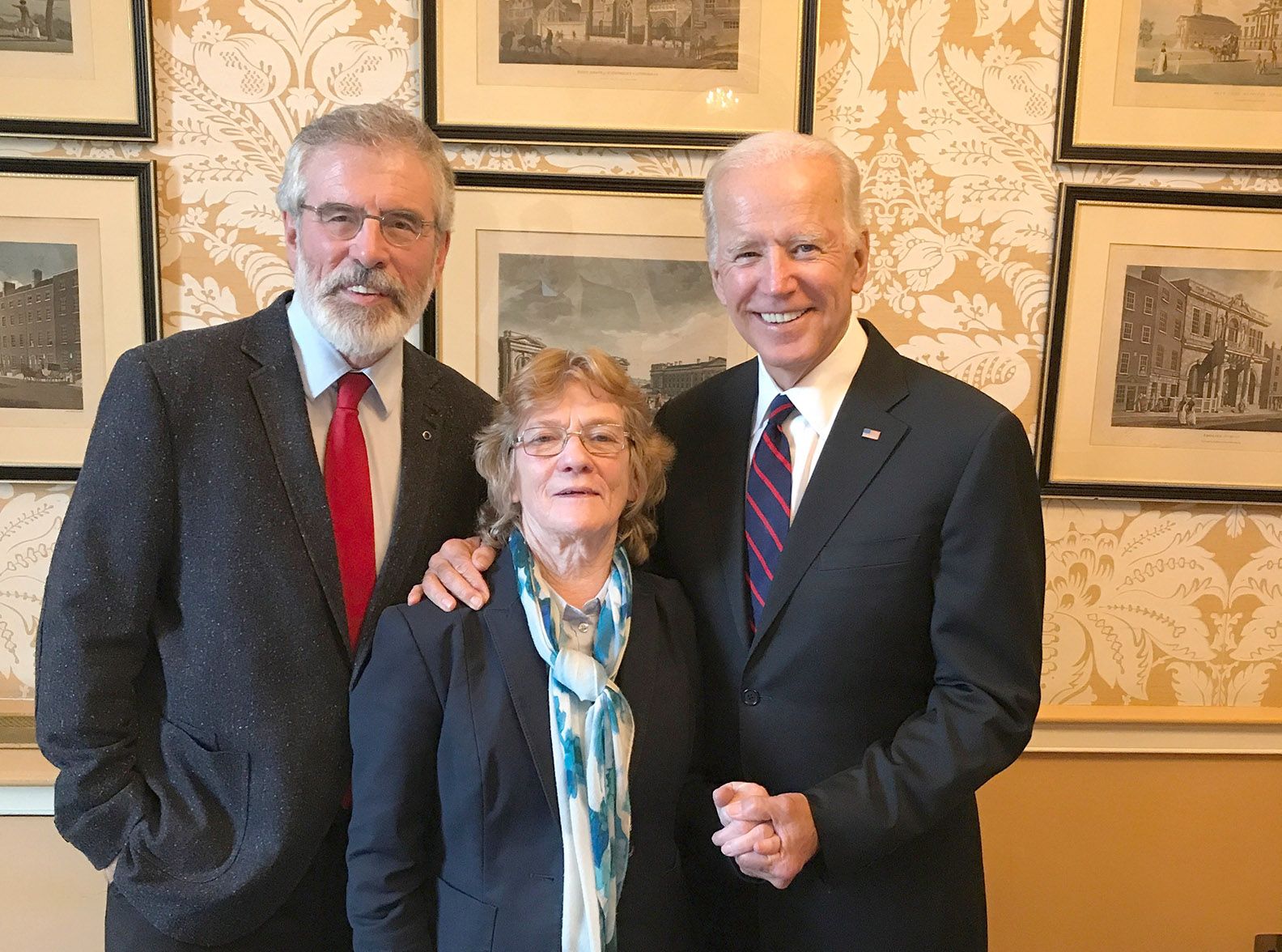 VICTOR: Gerry Adams with Joe Biden and Rita O’Hare – the President elect is a friend of Ireland

JOE Biden is now the President Elect of the USA. Kamala Harris – the first woman to hold this post – will be the new Vice President.

There is always huge interest in Ireland about US Presidential elections. The well known family connection between Joe Biden and Ireland has reinforced this interest. Kamala  Harris also has Irish roots as well as Tamil Indian and Jamaican family connections. Her mother is from India, her father from Jamaica.  By coincidence, both the President Elect and the Vice President Elect share  the same family name. Joe Biden is the great grandson of Owen Finnegan from the Cooley peninsula in County Louth. Kamala Harris’ Jamaican great grandmother’s first husand was Patrick A Finegan, the mixed race son of an Irishman of the same name.

Their story is the story of Ireland’s diaspora and our global connections. Their family history must be a fascinating tale. The next phase of it will be even more interesting. There will be high expectations of the incoming Vice President, not least among women and black American women in particular.

Both Joe Biden and Kamala Harris  have huge challenges before them and I wish them well. I  know President Biden. The Irish and British establishments will be watching him closely. I’m sure British representatives will soon be winging their way to DC. But I’m also sure that Ireland’s friends on Capitol Hill will be wise to that and I’m confident they and Joe Biden will stand over their commitment to defend the Good Friday Agreement.

One aspect of the US election campaign that we in Ireland should scrutinise more closely is the effort put in by most states and electoral bodies to make voting in the election as easy as possible.

Over 100 million citizens voted by mail or in person in early voting. Millions stood in long lines for hours in the weeks leading up to election day on November 3. The demand was so great that drive-through voting booths were established in some areas.

In 2016 47 million US citizens voted early. This time that figure was smashed ten days before polling day. The Covid-19 pandemic clearly played a part in persuading people to vote early and by mail but the fact that voting was made easier encouraged more citizens to participate in the democratic system.

Of course, there were efforts to suppress the vote in some states but despite this the American electorate chose to embrace all of the democratic methods available to them to vote in historic numbers.

This is a lesson that the two electoral systems on this island should examine closely. Despite claims in the past of voter fraud there has been no evidence of organised voter fraud over recent decades. What we do know, certainly in the north, is that every year many voters find that for no reason they have been taken off the register.

Elections are about citizens choosing who should have responsibility for managing the political system, making law and taking the economic, health, social and environmental decisions that will impact on their lives and their futures.

If a country as vast as the USA with 250 million voters can facilitate and encourage massive postal voting and in-person voting weeks in advance why can’t we?

If a country as diverse as the USA and with 50 states with different electoral rules and regulations can allow for in-person voting weeks before polling day, why can’t we?

The island of Ireland has a population that is less than that of the state of Massachusetts. If the USA can make voting easy for its citizens why can’t we?

A voting system that makes voting easy – that encourages citizens to participate – while enforcing rules and regulations to prevent fraud must be a positive to any democratic system. More people voting is good for democracy and good for holding parties and governments to account. It will also be essential for a fair outcome to the referendum on  Irish unity when that day comes.

There is a fixation with political opinion polls. I have a healthy scepticism of such polls. I know from long experience that they rarely reflect the Sinn Féin vote and there have been examples internationally, including last week’s US election, where the final election result was significantly different to that predicted in the polls.

Opinion polls have been around for many decades and use different methodologies. As well as evidencing the shifting political allegiances of voters in the north opinion polls and electoral results have underlined the growing demographic changes that are increasingly evident.

No month passes without some new survey being published. It is then scrutinised and parsed from every conceivable angle by political correspondents, academics, editorial writers and bloggers who seek to read the public mood and identify possible political trends.

Opinion polls have also focused on the related issues of Irish unity and a referendum on Irish unity. In May 2019, during the European and local government elections in the south, an opinion poll conducted at polling stations for RTÉ recorded 65% of respondents saying they would vote yes for a united Ireland if it were held the following day.

This has been a pattern in recent years. A LucidTalk poll two weeks ago reported that 43% of 18-24 year olds in the north would definitely vote to end the union with Britain. The poll claimed that 34% would support remaining. Among those aged between 25-44 LucidTalk said that 42% strongly favour a united Ireland.

The public mood as revealed in polls is also reflected in recent election results which have seen political unionism lose its electoral majority. It’s all a long way from the imposition of the Government of Ireland Act 100 years ago next month. Change is clearly taking place.

Change too is taking place in Scotland where an opinion poll last week for Politico said that independence for Scotland now has a 12-point lead.

This is the 11th poll in a row which has claimed that there is majority support for independence.

The Scottish National Party is busy planning for a referendum on independence and is honing its arguments. According to the US-based Bloomberg News, the British government is also planning to win public support in Scotland for retaining the union.

Failing to plan is no plan.


Do you have an old An Phoblacht?


The republican paper An Phoblacht – now a quarterly magazine – needs your help. This year it celebrates 50 years of unbroken publication.  As someone who writes regularly about recent republican history, An Phoblacht and An Phoblacht/Republican News is a great resource.

However, over the years editions of the paper were lost. That means we no longer have a complete archive. So, we are looking for your help in completing our archive.
We need specific issues of An Phoblacht/Republican News ranging from 1979 to 2015. If you or somebody you know has an issue of An Phoblacht from this period and want to help us, drop an email to admin@sinnfein.ie or call  01 872 6100. We look forward to hearing from you.