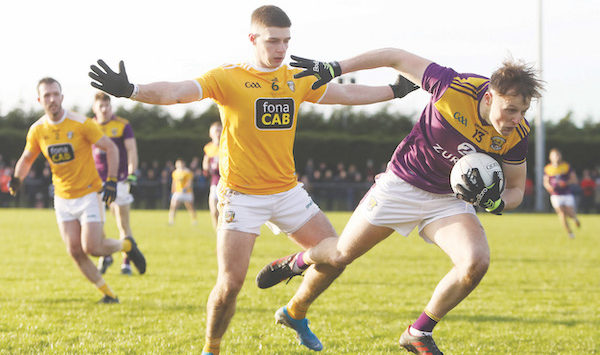 ANTRIM defender James McAuley believes the GAA have missed a trick by not opting for an open Championship draw, but is grateful the Saffrons will get the chance to gain promotion from Division Four in the autumn.

Last week, the Association published the revamped inter-county calendar which will include a straight knockout football championship, while the final two rounds of the football leagues will be played, but there will be no league  football finals in 2020.

The news is a positive development for Antrim, who had feared that they would be left stranded in Division Four for another campaign following an uncertain period after the sporting world ground to a hilt with the Covid-19 pandemic in March.

At the time, the Saffrons were keenly placed to secure promotion following a fine win over league-leaders Limerick in Portglenone and needed wins over Wicklow (away) and Waterford (home) to guarantee a top-two finish.

“We’d said over the course of the season that the league was our main objective,” said McAuley.

“It would have been very disappointing to have spent another season in Division Four, but we now have two games to try and secure our place in Division Three.

“That’s our main focus again now. We had hoped to get a game in Croke Park and, before lockdown, that was within touching distance. We are probably not going to get there through the Sam Maguire route, so it would have been great. We’ll not make an issue of it now because we are happy enough to get the leagues finished.”

Antrim will seek to regain that lost momentum when the leagues resume following a shortened club season over the summer.

Antrim’s trip to Aughrim will take place on the weekend of October 17/18 while they host Waterford a week later.

“The team had been chopped and changed throughout the year and I think we started to build some momentum,” added McAuley.

“I think the Limerick game was definitely our best performance of the season. I was a bit frustrating to have that taken away because even the atmosphere in training was great leading up to the Limerick game. Every position was up for grabs. It will be difficult to get that back, but every team is going to be in the same boat.

The Saffrons will then turn their attention to the Ulster Senior Football Championship.

The provincial Championships will be a straight knockout this year with the winners progressing to the All-Ireland semi-finals.

Antrim are set to face the winners of the preliminary round clash between neighbours Monaghan and Cavan on the weekend of November 7/8.

By that stage, the Breffnimen could be promoted to Division One and McAuley feels Antrim may have benefitted from an open 32-county draw, but not necessarily for an easier draw.

“It might have been the only time the option of an open draw could have been explored,” said the Naomh Éanna defender.

“It would have been good to try it out. We are due to play Monaghan or Cavan and Cavan could get promoted so we could be playing one of two Division One teams.

“From Antrim’s perspective, I think we wouldn’t have minded an open draw. You’d have the chance to go up against a Dublin or a Kerry or something. There is the other side were you could get drawn against a Division Three or Four team.

“We were able to beat Louth in the Qualifiers last year and there was a great atmosphere around Belfast ahead of the Kildare game. It was great to get a bit of a run in the Championship. Again, I don’t think there will be too many complaints now that we have a chance to get back playing football.”

Another issue that has been in the spotlight over the last week is the GAA’s apparent reluctance to publish inter-county teams to breach the training protocols.

County teams aren’t permitted to return to collective training until Monday, September 14, but the club calendars in some counties suggest this will not be followed across the board.

“Everyone knows there are certain teams who have been training for quite a while now. I don’t think it will be an issue for us,” said McAuley.

“The last thing you want to do after coming back from such a long break is over-train players.

“I would guess that there will be quite a high injury rate when things quick up because you are going back into Championship football almost right away. In Antrim, the Championship has been really competitive over the last couple of years.

“Lenny (Harbinson) has been quite good in that respect because he is happy enough for us to be playing away with the clubs and he will have people at most of the matches watching us.”

There is also speculation that Harbinson could bolster his squad in September with Lámh Dhearg attacker Ryan Murray back in the country after travelling to Dubai following last year’s club Championship campaign.

His clubmate Pearse Fitzsimons could also be in line for a county call up after recovering from a knee injury which forced him to miss the county final defeat to Cargin.

St Gall’s goalkeeper Chris Kerr could also be in line for a recall to the Antrim panel after completing his rehab following a year out with a cruciate ligament injury.

Padraig Nugent had assumed the number one jersey following Kerry’s inter-county retirement in 2018, but the St John’s ace opted out of the panel for 2020 to focus on his soccer commitments with Belfast Celtic.

Creggan’s Oisin Kerr and Rasharkin’s Andrew Hasson have shared goalkeeping duties for the Saffrons so far this season.

The Antrim hurlers, meanwhile, will get the opportunity to return to Division One after the GAA confirmed the date of their delayed Division 2A final against Kerry.

Darren Gleeson’s men will take on the Kingdom on the weekend of October 17/18. The original fixture was set to act at as a curtain raiser to the Dublin versus Meath Division One football clash back in March at Croke Park.

However, it remains to be seen if the rescheduled tie will be fixed for another venue.

The winners of this year’s Joe McDonagh Cup will not feature in this year’s All-Ireland series, but will be promoted for 2021, but there is an added incentive for this year’s winner with the final being played as a curtain-raiser ahead of the All-Ireland Senior Championship final at Croke Park on Sunday, December 13.

The All-Ireland Football final will take place on Saturday, December 19.