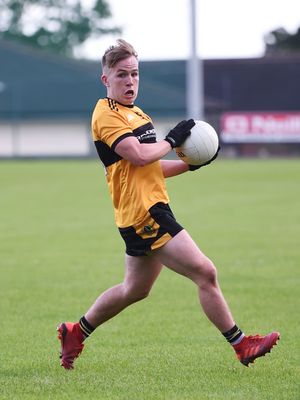 A MORE clinical Naomh Éanna side got the better of St Brigid’s at Hightown yesterday (Sunday) as Gaelic Games resumed across the county over the weekend.

Both sides showed signs of rustiness throughout the contest, but there was also some excellent finishing on display.

Rory Brolly atoned for an earlier miss with a stunning individual goal on the stroke of half-time after Stephen O’Connor’s goal had given the home side the advantage.

However, a brilliantly engineered strike from Peter Healy midway through the second half gave his side the upper hand once more and Oran Eastwood’s penalty goal moments later sealed the spoils for Naomh Éanna.

The North Belfast side host Gort na Móna in the Senior Championship on Sunday while St Brigid’s face a tricky assignment with a trip to Aghagallon.

Both management teams will have been happy to blow the cobwebs off, but will know that improvement is needed ahead of their respective Championship assignments.

For Naomh Éanna, Eoin Nagle’s deployment as a sweeper worked well - although they may need his attacking prowess at some stage.

St Brigid’s created enough chances to take something from the game, but James Smith did the bulk of their scoring.

The South Belfast side opened the scoring via Ethan Carleton after two minutes. However, 25 minutes passed before they raised another white flag.

In that time, the hosts were much more ruthless up front with a brace of Eastwood frees and points from O’Connor and Ruairi Scott putting them ahead.

Things might have been different had Brolly scored when played through by full-forward Joseph Finnegan. The corner forward seemed to hesitate for the briefest of moments before hitting a low shot that Paddy Flood was equal to.

When Smith crashed a free off the post moments later, Eunan Conway could have been forgiven for thinking if wasn’t going to be their day.

Things went from bad to worse for the visitors as an attempt at a shot from Scott fell short and into the path of O’Connor, who stabbed at the ball along the ground and it managed to evade Jamie Allen in the St Brigid’s net.

A point from a mark from Smith seemed to spark St Brigid’s into life again and they ended the half strongly.

Smith reduced the gap to four from a free before a delivery from Michael Cummings sent Brolly on his way to goal.

From an acute angle, the Antrim U20 skipper somehow managed to find the far corner of Flood’s net despite the close attention of two Naomh Éanna defenders.

There was some confusion as to what the exact half-time score was as O’Connor seemed to have a legitimate score at the other end chalked off as referee Cathal McDermott confirmed the score at 1-5 to 1-4 at the break.

Once again St Brigid’s were slower off the mark and the hosts extended their lead with points from the Healy brothers Kristian and Peter, although the former fisted over when he could have gone for goal.

Ciaran Thomson also forced Allen to make a smart save midway though the half while Smith converted another free to keep his side in contention.

The Glengormley men pulled clear in the closing stages thanks to a brace of goals from Antrim stars Peter Healy and Eastwood.

Healy powered his way through the heart of the St Brigid’s defence before unleashing a fine shot past Allen. Just two minutes later, Eastwood was set to do likewise as he rounded Allen, but was fouled as was about to shoot by John Morgan, who earned a yellow card for the challenge.

The resulting penalty was dispatched by Eastwood himself with the help of the underside of the crossbar to put his side eight points ahead.

Much like the first half, Conway’s men ended the half with a flurry of scores, but it was too little, too late.

Smith converted a free, but blasted over another moments later when he had the goal at his mercy.

The centre forward landed another two frees late on to end the game with 0-8 to his credit. Yet, St Brigid’s will need to have a better spread of scorers when they take on a potent Aghagallon side this weekend.

Naomh Éanna will also be hoping their dual players come through their midweek hurling fixture against St John’s unscathed ahead of their clash with the Gorts.