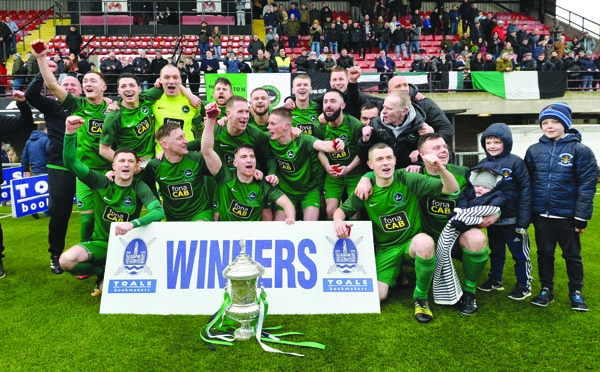 NEWINGTON manager, Conor Crossan has demanded an improved showing from his side as they continue the defence of their Steel and Sons Cup title with a quarter-final away trip to St James’ Swifts on Saturday.

The North Belfast side suffered a 2-1 home defeat to Lurgan Celtic earlier this month as they lost ground to Championship 2 league leaders Annagh United.

Last Saturday, they bowed out of the Intermediate Cup following a 4-3 penalty shoot-out defeat at Maiden City after the game finished 1-1 after 90 minutes.

Crossan feels Saturday’s game is the perfect opportunity for his side to rediscover their form in a competition that is close to their hearts.

“We are looking forward to Saturday, hopefully we can get back to winning ways,” said Crossan.

“The boys know that the performances haven’t been good enough over the last couple of weeks.

“We want to stay in as many cup competitions as we can because of the way the league is structured.

“It was a poor result and a poor performance against Lurgan Celtic and we had a few players out last Saturday, but it was sore getting beat on penalties.

“You always want to be going into the big games on the back of a win and our form of the last two weeks hasn’t been good.

“We are going into this match against a team that has won 13 from 13 so they’ll be full of confidence. It will be up to me to get the team up for this game.”

As defending champions, Newington will be the favourites to progress, especially considering they play in a higher league.

Yet, the progress made by St James’ Swifts hasn’t gone unnoticed in the north of the city and Crossan is refusing to underestimate the challenge posed by the Swifts at Donegal Celtic Park on Saturday.

“People might underestimate the Ballymena League, but you have some great teams in that league – the likes of Bangor and Coagh and teams who were in Championship 2 in recent years,” added the Newington boss.

“They are playing at a good level and they have players who have experience of playing in the Irish League.

“They’ll be full of confidence and I don’t think they lost too much sleep when they drew us.

“They are the type of team who relish the challenge no matter who they face.

“They’ve been making noise for a while now.

“They will want to build on that start and keep going, but hopefully we can put a stop to that winning run on Saturday.”

The West Belfast side have made an incredible start to the 2018/19 season and have won all 13 of their game so far.

The only stain on an otherwise perfect start came when they lost the points following their 5-2 win over last year’s Ballymena and Provincial League winners Glebe after it emerged one of their players should have been serving a suspension arising from a ban with his previous club.

St James’ are aiming to go a step further than they managed in last season’s competition when they bowed out after losing 3-1 to Linfield Swifts in the last eight.

“The whole club is buzzing, we know how big this competition is. We got to this stage last year and we lost out to Linfield Swifts,” said Murphy.

“We got a goal back and we threw everything at them to get an equaliser and we make a silly mistakes and they broke and made it 3-1.

“It was a bit gut-wrenching. We wanted to go on further in the competition and we are just hoping to go one step further this year and make it into the semi-finals.”

Last season, the Swifts challenged for promotion from the Ballymena and Provincial League Premier Division, but fell short at the end of a busy campaign.

This season, they are, strictly speaking, unbeaten on the pitch and Murphy feels that is in no small part because of the summer signings made by manager Damien McStravick.

“Last year, we knew we had a good team and we were playing good football,” said Murphy.

“Towards the end of the season, it was just injuries and suspensions that killed us.

“Our squad was a bit light and a few boys had to play with knocks.

“During the summer, we made some brilliant signings thanks to Damien McStravick. He met boys who had played at a higher level and sold them on the ethos of the club.

“We ended up with a smashing squad.

“We kept all the players we had last year and we’ve added a bit more quality to it.

“The new boys have all bought into what the club is about and they are enjoying their football.”

This Saturday, St James’ bid to continue their incredible start to the season by dumping the holders out of the Steel and Sons Cup.

However, Murphy is expecting a tough battle from the North Belfast side given that Newington went on to defeat Linfield Swifts in last year’s Christmas Day final at Seaview.

“They are a very dogged team and they work hard for each other. They are able to take their chances when they get them,” added the St James’ Swifts assistant.

“We also know they are the champions of this competition and they’re no going to let go of it easily.

“We played them in pre-season and we won that game 4-2, but they signed well after that game.

“We know we are going to be up against it and it will be a real test.

“We have to be at our best, but the way we are playing, I think if we show up on the day, we can win the game.”

Newington will be without the suspended duo of Gavin Taggart and Kevin Bradley for Saturday’s clash while St James’ Swifts are set to be at full strength for the quarter-final tie.