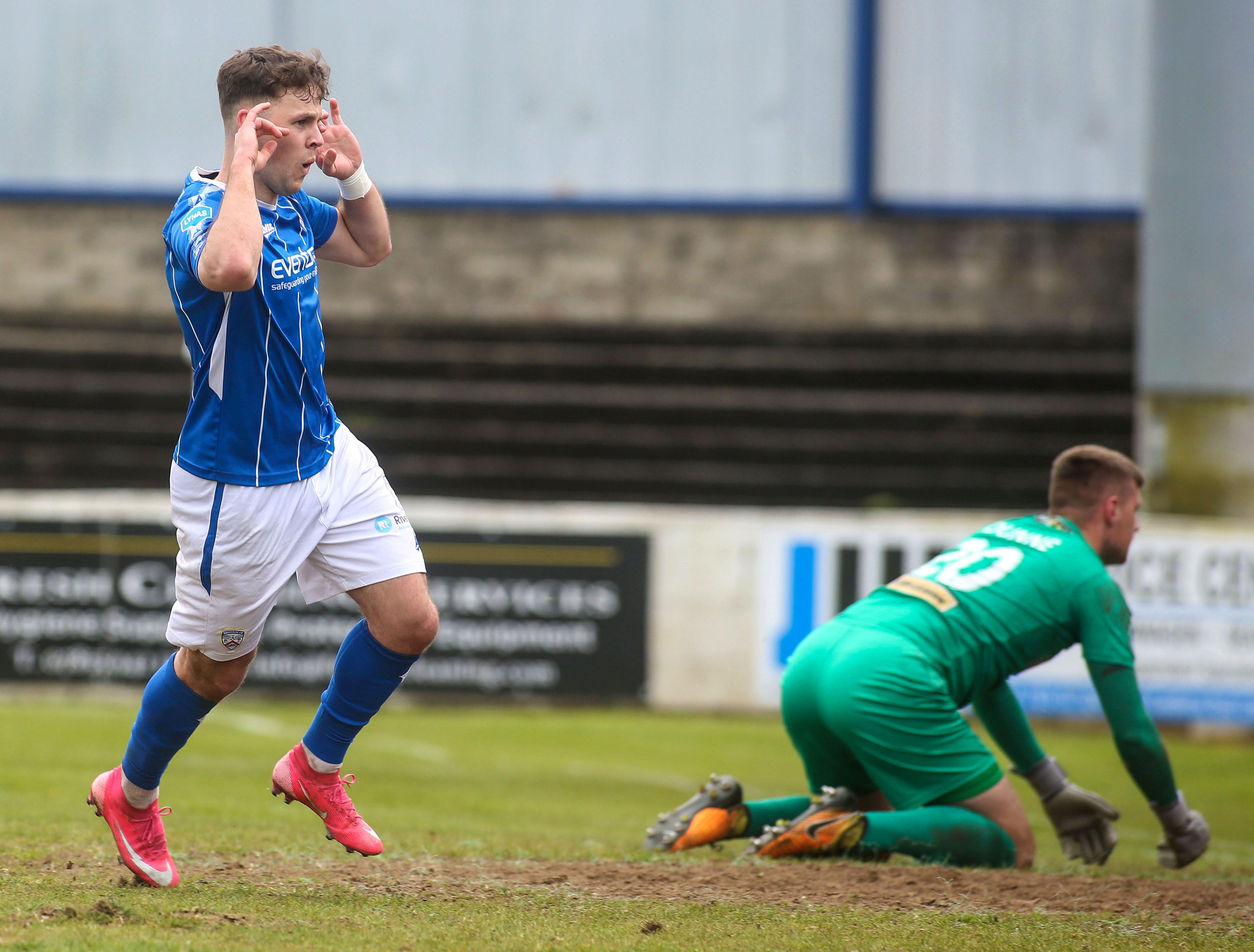 CONVERTED penalties in each half from Ben Doherty ensured that Coleraine ran out 2-0 winners over 10-man Cliftonville at the Showgrounds on Saturday afternoon.

On both occasions, Matthew Shevlin was felled by Reds’ goalkeeper Aaron McCarey - the second resulting in the Monaghan native receiving his marching orders - and penalty specialist Doherty made no mistake from 12 yards.

Cliftonville boss McLaughlin made one change from the midweek Irish Cup win over Portstewart as Ryan O’Reilly returned in place of Seanan Foster.

Both sides threatened early on with Daire O’Connor feeding Michael McCrudden whose cut-back was cleared by Lyndon Kane.

At the other end, Matthew Shevlin burst into space and Kris Lowe was able to nip in and steal the ball from the striker’s feet.

The Reds had made the better of the early running, but on 11 minutes conceded a penalty when Shevlin was adjudged to have been taken down by Aaron McCarey en route to goal and linesman flagged for Raymond Crangle to point to the spot.

Ben Doherty seized responsibility and drilled home his 16th of the season and first since the corresponding fixture between the sides at Solitude in March.

Midway through the half, O’Connor and McCrudden linked up and just as McCrudden was about to pull the trigger, Aaron Canning bundled the danger clear.

Canning was again alert a few minutes later to close down another dangerous Cliftonville attack, while Eoin Bradley snatched at an opportunity and hit it high off target.

James McLaughlin almost doubled his side’s lead with an audacious volley from 35-yards which had McCarey scrambling and just scaled the roof of the net.

A short corner between Aaron Donnelly and Daniel Kearns almost led to an equaliser, but Kearns fizzed the ball across the face of goal and inches wide.

Then from a dangerous Rory Hale free kick, Ryan O’Reilly thought he was about to head home only for Stephen O’Donnell to steer the ball behind for a corner as the hosts went in with the advantage at the interval.

Cliftonville bossed the opening stages of the second period but lady luck wasn’t smiling on the North Belfast side.

Stephen O’Donnell’s clearance rebounded off Michael McCrudden and Daire O’Connor snatched at the loose ball and was off target.

Ryan O’Reilly then tried his luck with a shot that took a wicked deflection off O’Donnell and went behind for a corner.

Then after a superb move, McCrudden fed Ryan Curran who in turn picked out Aaron Donnelly with Martin Gallagher turning the left-back’s effort behind for another corner.

The corner count continued to stack and from a set-piece from the opposite side, Daniel Kearns was caught in a tangle inside the area, but Crangle was unconvinced.

Despite all their early pressure Cliftonville were to be hit with a sucker punch as a long ball forward led to Shevlin putting Kris Lowe under pressure. Lowe attempted to head back to goalkeeper McCarey and Shevlin nipped in with the Reds’ shot-stopper forced to take him down at the expense of a further penalty and a red card.

Declan Dunne replaced Garry Breen, but the sub ’keeper was unable to prevent Doherty doubling the Bannsiders’ lead despite guessing the right way.

The 10-men continued to push for a goal which might bring the game back to life as Rory Hale burst forward and his tried his luck from range, but it was a few inches too high. Michael McCrudden then forced a save out of Martin Gallagher.

But it was Coleraine who went closest to adding a third inside the final five minutes. Substitute Jamie Glackin’s free-kick was nodded on by James McLaughlin, but it crashed off the underside of the bar.

It mattered little in the end, however, as Coleraine ran out 2-0 winners and leapfrogged Glentoran into second place in the table.