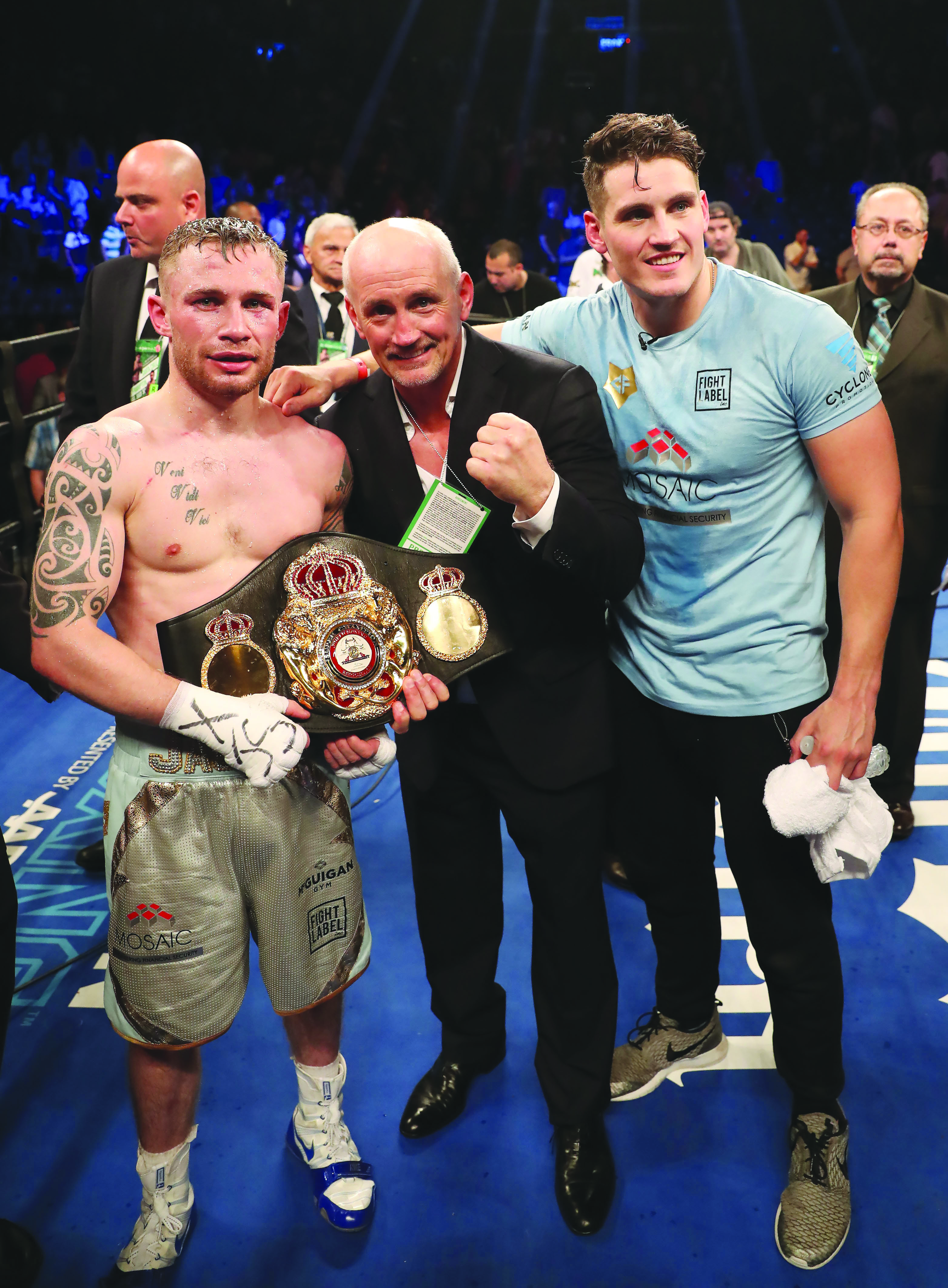 Carl Frampton, Barry McGuigan and Shane McGuigan pose with the WBA featherweight title belt after ‘The Jackal’ made history by becoming the first two-weight world champion from the North in Brooklyn on Saturday night

THE boxing world is Carl Frampton’s oyster as ‘The Jackal’ produced the performance of his life at the Barclays Centre in Brooklyn, New York on Saturday night to claim the WBA featherweight title from Leo Santa Cruz.

Frampton - the first boxer from the North and second Irishman to become a two-weight champion - rose to the challenge superbly against ‘El Terrimoto’ in a fight that will be remembered for years to come across the globe.

Such was the manner of Frampton’s majority decision win, there were immediate calls for a rematch between the pair with all in attendance purring after 12 rounds of world class action that saw Frampton’s superior power, movement, timing and shot selection nullify Santa Cruz’s noted workrate.

The Belfast man now has several options for his next move. There is the rematch with Santa Cruz or perhaps a meeting with Wales’ IBF champion, Lee Selby who was in attendance on Saturday. Either way, ‘The Jackal’ is hoping to box again before the end of the year, preferably on home soil.

“I don’t think there’s a rematch clause, but I would be happy to do that again (against Santa Cruz),” said the 29 year-old after Saturday’s blockbuster.

“I would love to bring him over to Belfast and we could sell out a stadium as long as we did it at the right time of the year.

“Lee Selby is here too, a great fighter and somebody I respect. I’ve been singing his praises for some time. He’s one of the best fighters about so that’s a fight that interests me, same with Gary Russell.

“I don’t want to be disrespectful, but I just want to be involved in big fights against all of these top fighters. Someone said to me yesterday ‘real fighters fight’ so that’s what I wanted to do.”

Brooklyn was turned into a tiny corner of Belfast on Saturday night with the travelling support as-well-as the New York Irish community coming out in their droves to cheer on Belfast’s favourite son.

It may have felt like the Odyssey Arena during the fight, but Frampton acknowledged the effort and expense for his fans to travel across the pond and says he still wants to appear in his home city.

“Maybe it wouldn’t be a bad idea to hit the west coast at some stage, but I’m a Belfast boy and I love my fans back home. I don’t want them to have to spend so much money to come and see me all of the time, so I would love to fight at least once a year at home.

“Vegas would be nice too so why not? But I’ve said it before and it’s not just because I’m here, but New York is more appealing to me than Vegas.”

New York promoter, Lou Di Bella is one man who would welcome Frampton and the ‘Jackal Army’ back with open arms, proclaimed the North Belfast man as “one of the finest fighters in the world today.”

He is one who is not just hoping for, but expecting a rematch of Saturday’s fight that lived up to all expectations and then some.

“In boxing you have some guys who are forever linked. You have Barrera and Morales, Ward and Gatti and all they accomplished,” he said.

“After tonight, I think these guys are forever linked. If you are a fight fan, this was a classic fight.”

It most certainly was and one that the outgoing champion, Santa Cruz played a full part.

While disappointed, the Mexican was gracious in defeat but says a rematch is now the only thing on his mind to avenge his first career loss.

“It was a pretty tough fight that could have gone either way,” he admitted.

“I want the rematch and would want it in LA, but if he wants it in Belfast then we will go there and I’ll be ready.

“We came over here to New York for this and he had a lot of people behind him because there are so many Irish here.

“I think that helped him a little, but I don’t take anything from Carl Frampton. He is a great fighter and a great champion.”

While Santa Cruz is calling for the immediate rematch, IBF champion Selby is also hoping he is next in line to face ‘The Jackal’ in what could be Frampton’s second unification fight at a different weight in the same calendar year should it be made.

The Barry native was full of praise for Frampton after Saturday’s win, but said he would be fully confident of victory should they square-off in a fight he believes would be easy to make.

“Back in the UK this is a massive one and it’s one I want,” he said.

“My manager and his manager get along together and they put on a show together in Cardiff so there should be no problem making that.

“I thought he was brilliant. It was a really tough fight and I was surprised by his tactics. I didn’t think he would stand and trade, I thought he would box on the back foot but he beat Santa Cruz at his own game.”