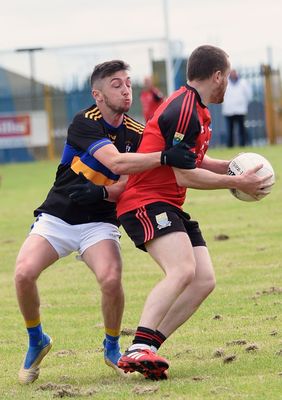 Action from this afternoon's game

Homefit Antrim Senior Football Division One, Section Two
O'Donovan Rossa 1-12
St Mary's, Ahoghill 0-16
A NEIL O'Connell point deep into stoppage time was the winner as Ahoghill took the points against O'Donovan Rossa in Belfast.
The South West club were full value for their win against a Rossa team that was making its return to Division One after winning promotion last year.
On a day when senior action returned to Antrim following four and a half months of inactivity, it was to be expected that a bit of rust would set in, but the visitors to Rossa Park were quickly into their side against the host team that took some time to settle down and get to the pace of the game.
As it was, Rossa could have found a late winner themselves, but cheaply coughed up possession with Ahoghill breaking upfield to work the ball to O'Connell who steered it over.
It was a little surreal to be back in the environs of a GAA ground with no spectators as we adapt to our new reality. Water breaks midway through each half has effectively turned a game into one of four quarters, although some things will never change with social distancing not exactly adhered to by players once the ball is thrown in.
In all, this was a sporting game and played in good spirit, with teams using this as an opportunity to get some action before being thrust into Championship action from next week.
Ahoghill will be happy with their days' work as they grabbed this game by the scruff of the neck from the beginning and used the wind advantage to good effect as PJ O'Connell curled over an excellent score two minutes in.
Points from Patrick Graham and Thomas McGlone followed before Rossa got themselves on the board when Donal Armstrong turned and curled over.
Thomas Morgan used his pace to sprint clear and add another from the hosts and on 15 minutes, he was again in on goal but was trailed back for a penalty that was converted low into the bottom right corner of the net by Colm Fleming to make it 1-2 to 0-3.
This major failed to spark the hosts into life as Ahoghill dominated the remained of the half, reeling off seven points on the spin.
PJ O'Connell started this run with a shot that dropped over from range, Donal Graham kicked two frees and Pearse Donnelly a 45, whilst McGlone burst through to score, James O'Connell kicked an excellent score and Eoin Graham fisted over to make it 0-10 to 1-2 approaching the half.
Rossa had been struggling to make much headway going forward, but did finish the half well with Morgan twice bursting through to fire over - the first of which may have led to a goal, but his piledriver just cleared the bar.
As it was, Ahoghill went into their huddle at the break leading 0-10 to 1-4.
The breeze died down a little in the second half as Rossa aimed to eat into the gap although it was Neil O'Connell who struck first after the break with a fine score.
Colm Fleming replied from a free and he was to strike again following a good score from Dominic McEnhill to bring Rossa to within two.
Ahoghill were always to find a response with James O'Connell firing over at the other end, but the hosts were growing into the game as Fleming curled over from play and then Stephen Beatty scored a trademark point off his left to level the game entering the fourth quarter.
Following the water break, Ahoghill again took a grip as Patrick Graham found his range for the second time of the afternoon and a Donal Graham free doubled their advantage heading into the final five minutes of the 60.
Rossa responded well as Fleming converted another free and Beatty again got space to curl over to level as the game moved into stoppage time.
With the water break, there was around six minutes to play and James O'Connell nudged Ahoghill one up before Fleming again converted a dead ball.
There was time for a winner and Rossa found themselves on the ball. As they probed an opening, a slack handpass was cut out and Ahoghill broke, working to Neil O'Connell on the right and despite the angle, he split the posts to seal victory and the points to get this year's belated start to the season off on a good note.
It wasn't exactly vintage stuff in this game, but that was always to be expected given the circumstances. Both teams will be glad of the competitive game as they now set their sights on next week when things will get very real.