People asked for memories of Para regiment from the 70s 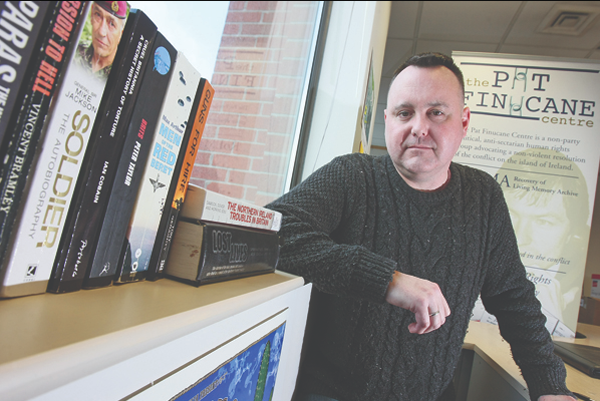 A CASE worker with the Pat Finucane Centre wants to hear from readers about their memories of the notorious Parachute Regiment – in particular the years 1970 to 1973.

Micheál Smith is currently working on a detailed project focusing on the notorious British army regiment ahead of a discussion/debate for the annual August Féile an Phobail.

Micheál explained how the Albert Street-based centre has been working for a number of years with families who have had family members killed, injured, abused or tortured by the British army’s Parachute Regiment.

“We began to examine these cases as a body of work towards the end of last year with a view to exploring – and exposing – the ‘corporate identity’ of the Paras,” he said. “More importantly, we hoped then to set out the corporate responsibility of the Paras for their abuses.

“It is especially timely this year as we have begun to hear the prosecutions of two soldiers for the murder of Joe McCann from the Markets area who was killed in April 1972 and the Ballymurphy Massacre Inquest is set to open in September.

“The reason why we picked 1970 to ’73 was because these were arguably the worst years of the conflict, with 1972 seeing the most deaths, 480, of any one year. The summer of 1972 was also the peak of the British army’s engagement here, when 28,000 soldiers were deployed, a period which the British army even characterised as ‘classic insurgency’.”

Micheál added that aside from civilian deaths, “We have investigated the Paras’ involvement in torture, waterboarding and sadistic sexual assaults and the day-by-day brutality inflicted on communities right across Belfast.

“Another basis of the project is to try and examine what was it about the Paras that made them so separate from the civilians here and ignore the fact that here looked like back home to them.

“These guys had come in from jungle warfare and didn’t see any difference between the two communities here either.

“This is a way of letting people out there know what I’m working on and if they want to contribute.

“I’m open to hearing from all across the community as to their experiences during this time. It is our hope that this current project will contribute to an understanding of the Paras’ culture, their training, their mindset – all of which enabled them to act as they did in Ireland, and to operate as they were intended to by the political establishment in London.”