Photographer Thomas is the pride of Belfast Media Group 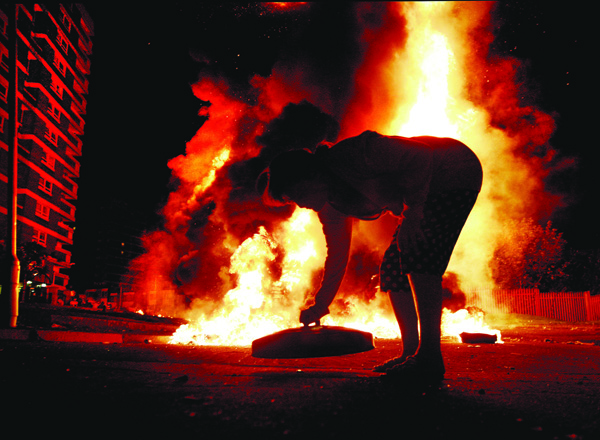 AN intimate retrospective of photographs chronicling 20 years since the Good Friday Agreement is set to come under the spotlight at St Mary’s University College as part of Féile an Phobail’s 30th celebrations.
During his 20-plus years as a photo journalist with the North Belfast News, Thomas McMullan has captured seminal photographs depicting the darkest days of the conflict, the “early mornings and even longer days of the peace process talks” and “the lighter moments during that period”.
Having always had an interest in “striking images” Thomas explained how it wasn’t until his early 20s that he picked up a camera hoping to “make a living out of it”.
“I first started off with a wee magazine in Ardoyne called Horizon, it was a community magazine and it was there that I decided I want to make a career out of taking photographs. I really loved it and I would’ve tried to take photos out of anything newsworthy,” he said.
Thomas spoke of how he approached Andersonstown News founder Basil McLaughlin and Belfast Media Group managing director Máirtín Ó Muilleoir at their West Belfast offices, who after going through his portfolio “gave me a start and that was 20 years ago.”
“At the North Belfast News we were capturing the moment of the peace process, it was a very fraught, fragile time,” he said.
“We were talking to prominent republicans, loyalists, peacemakers at that time. I wanted the photos to reflect on why we were going through a peace process, why we were going through a struggle for peace.”
Thomas spoke of how trying to condense 20 years worth of work down to “15, 20 photo’s” was a tough ask. “It was extremely hard to whittle down the photos, you have to be critical of your own work but I got there,” he laughed.
The multiple recipient of NI Provincial Press Photographer of the Year says it will be a fantastic opportunity to see his work up alongside his fellow artists when the St Mary’s Visual Arts exhibition goes live on Thursday evening.
“This is a piece of history for me coinciding with 30 years of Féile. I’m really looking forward to seeing all the other work. I was always a member of the Christian Brother’s camera club on the Antrim Road and owe them a lot.
“I hope those who are coming will appreciate the work.”