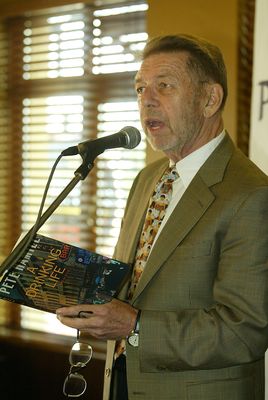 SON OF BELFAST: Legendary writer Pete Hamill who passed away today in New York of kidney and organ failure after a fall. He had been ill for some time. Mal McCann, Belfast Media Group

He was Belfast's greatest-ever writer, though born 3,000 miles away in Brooklyn, New York.

Son of Belfast emigrants, Pete Hamill became an iconic figure in American journalism and literature whose love of his native New York made him a national institution.

His memoir 'A Drinking Life', recounting his years of hard-drinking before he got sober, his love letter to the Big Apple 'Downtown: My Manhattan', and his major novels including Forever, dwelt heavily on his Irish heritage.

And Belfast was never far from his mind. He spoke eloquently of how his parents, from Ballymacarrett in east Belfast and the Falls, had been "hurt out of Ireland" and remained a passionate supporter of civil rights, justice and equality in his homeland.

“In the end, the only thing the true New Yorker knows about New York is that it is unknowable.” -- journalist, novelist, essayist, editor & educator #PeteHamill, born August 24,1935 in Brooklyn, New York; died August 5, 2020, in Brooklyn, New York. Rest in Peace Sir pic.twitter.com/imytv6Sfid

In 2003, the Belfast Media Group invited him back to Belfast to read at Scribes at the Rock during Féile an Phobail. At the festival, he read an excerpt from 'A Drinking Life' which was set in the upstairs lounge of the Rock Bar the night in November 1963 that JFK was shot — the same location of his Féile talk.

During that trip home, he also made the journey to Amcomri Street where his parents had lived before setting out for America – and met neighbours who could remember the couple.

Pete was the only person to have served as editor of the both the Big Apple tabloids the New York Daily News and the New York Post but it was the New York Times which best captured the essence of Pete Hamill the newspaperman.

"In another age, when the newsrooms of metropolitan dailies pulsed to the rising thunder of typewriters on deadline, Mr. Hamill, searching for a future after years of academic frustration, Navy life and graphic design work, walked into the city room of The New York Post in 1960 and fell in love with newspapering."