Punter hits bet of a lifetime thanks to last minute goals 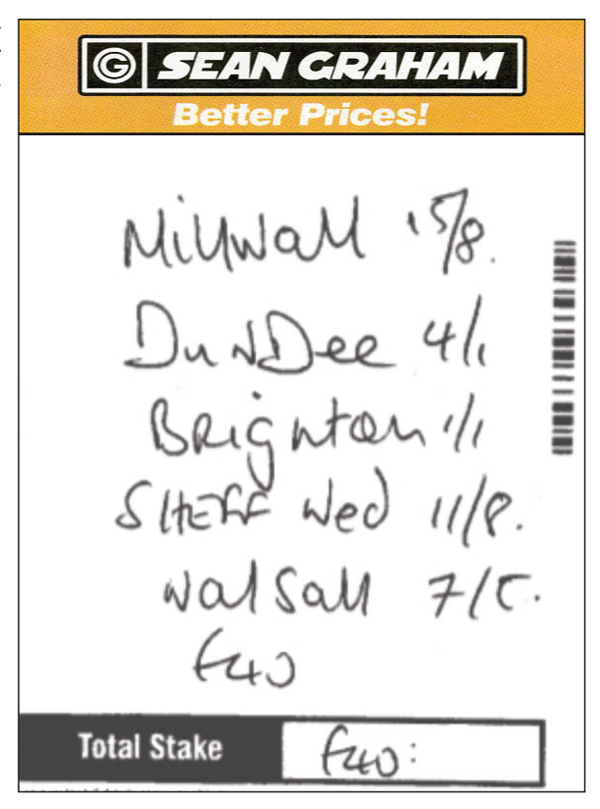 A local Whiterock punter hit Sean Graham bookmakers for over seven grand at the weekend with a cracking £40 bet and had the PG Facebook page cheering on his sweat on Sunday.

The punter took four teams to win on the Saturday. Brighton (1/1) won 2-0 at Barnsley and Sheffield Wednesday (11/8) scraped home winning 2-1 away at Nottingham Forest.

With the first two banked, it didn’t look good in the other twp games until 10-man Millwall (15/8) scored a late winner at home to Leicester in the FA Cup.

Still, Walsall (7/5) were drawing 0-0 at home to Peterboro and the bet looked doomed but then BOOM as 93rd minute goal put the Saddlers 1-0 up and then they grabbed another in the 97th minute and our punter had the sweat of his life going into Sunday.

He took a big chance with his final selection and took Dundee (4/1) to beat managerless Rangers at Dens Park – the poor punter could not lay off as Rangers were odds-on to win the game.

He could hardly believe his eyes when Dundee went 2-0 up and we advised him to lump on Rangers +1 at 4s to cover the bet – that looked good advice when Rangers pulled back one and our punter endured a torrid last 20 minutes which saw Kenny Miller hit the post.

Dundee held on for the win and punter had just pocketed £7,206.50 for his £40 outlay – that included a 10 per cent bonus that Sean Graham offer soccer punters.

As the full list of candidates for the 2017 Assembly Election were confirmed, local bookmaker Sean Graham released their odds for the outcome for each of the 18 constituencies. The bookmaker has looked at the likely outcomes for each constituency and is taking bets on the five new MLAs in each seat after the election on March 2.

Brian Graham, said: “Last year there were a number of events, including elections, which few pundits correctly predicted. Punters who put money on Brexit, Trump and Leicester City winning would have been well rewarded.

“Predicting the five winners for each constituency in this election wont be easy.

“The reduction in seats for this election, from 108 to 90, coupled with the problems around the Executive table, could lead to some very interesting results right across the 18 constituencies.

“Looking at a seat like Strangford, which has been fairly predictable in previous elections, now becomes a very interesting race, with at least seven candidates with a good chance of taking a seat. With three high profile DUP ministers, a former DUP minister and the UUP leader among those running, there is likely to be someone of high profile losing out.

“Right across the 18 constituencies there are potential upsets, but will anyone be able to properly predict them? We’re looking forward to seeing a lot of the well known political pundits put their money where their mouth is and predict each of the results.

All the betting available in all Sean Graham shops and online via Twitter and Facebook and we have signed up Squinter to mark our Assembly Election card in next week’s PG.

Ante-Post punters were left reeling yet again on Tuesday after it emerged that Thistlecrack will miss the Cheltenham Festival, joining the list of big names missing this year.

We are already missing Annie Power, Coneygree, Don Cossack, Vautour and Faugheen and now Thistlecrack has taken even more gloss of this year’s festival.

Sean Graham reacted by making Native River their 5/2 favourite for the Gold Cup.

On to the weekend action and we start at Newcastle with our Saturday Trixie bet. As usual, the Betfred Eider Chase (2.45) is a puzzler for punters to work out and we side with Shotgun Paddy (8/1) who is due in one of these long staying races and could well strike for the Emma Lavelle yard.

Over at Kempton we have the BetBright Chase (3.35) and Three Musketeers (6/1) looks the one they all have to beat in this one. We head to the Winter Derby Stakes (3.15) at Lingfield to make up the Trixie and Mutakayyef (6/4) looks a class above this field and if fit and ready should win this.

On to the odds-on acca and we suggest wins for these odds-on shots at the weekend.

10/12 last week so if we do better we will go very close and we suggest both teams to score in the following games: Aston Villa v Derby, AFC Wimbledon v Walsall, Carlisle v Portsmouth, Leyton Orient v Cheltenham, Luton v Plymouth and finishing with the Braintree v Maidstone Utd game.

We start with the weekend Quad and start in the Premier League. We start at Selhurst Park and it’s simple, Crystal Palace (11/10) need a win on the board and quick so we are taking them to bank three big points when they host Middlesbrough.

West Brom (11/10) are hard to beat at the Hawthorns and can take all points in their clash with out-of-form Bournemouth, while Cardiff (13/8) can continue their great run with a win over Fulham.

We head to the Scottish Championship to make the weekend quad up and Dundee Utd (1/1) should bank all the points when they host Morton at Tannadice.

On to the weekend draw trixie and can we follow up on last week? Let’s hope so and we sit on the fence in the following games: Aston Villa v Derby, Hull v Burnley and finishing with the Partick Thistle v Hearts game.

THE National Football League returns this weekend with teams either seeking to make a push for promotion or retain their status in their respective divisions.

Both Offaly and Louth will be aiming for promotion after decent starts to their Division Three campaigns and go head-to-head at Tullamore on Sunday.

However, Offaly were slightly flattered by their 13-point winning margin over Antrim as the Saffrons missed three good goal chances in the game.

Louth are the value pick at 5/4 even though they are away from home.

Roscommon are yet to pick up a point in the top tier but they will relish a trip to Castlebar to face Mayo on Saturday night and are Evens with a plus five point handicap.

Clare (plus four) are 5/6 against Galway in Division Two while Dublin will be looking a reaction after an underwhelming performance against Tyrone last time out.

The Red Hands could and should have put an end to the Dubs’ 30-game unbeaten run but let a five-point lead slip late on.

The All-Ireland champions will prove too strong for an out-of-sorts Donegal and are 11/10 minus three points.

Finally, Wexford are Evens with a minus three handicap at home to Waterford and the five-timer pays a handsome 35/1.

The opening two rounds produced six draws across the divisions and a few matches this weekend stand out.

On Saturday night, Division Three rivals Laois and Tipperary look evenly matched and are 15/2 to share the spoils.

Longford versus Armagh and Galway versus Clare also look too close to call at 15/2 and 9/1 respectively.