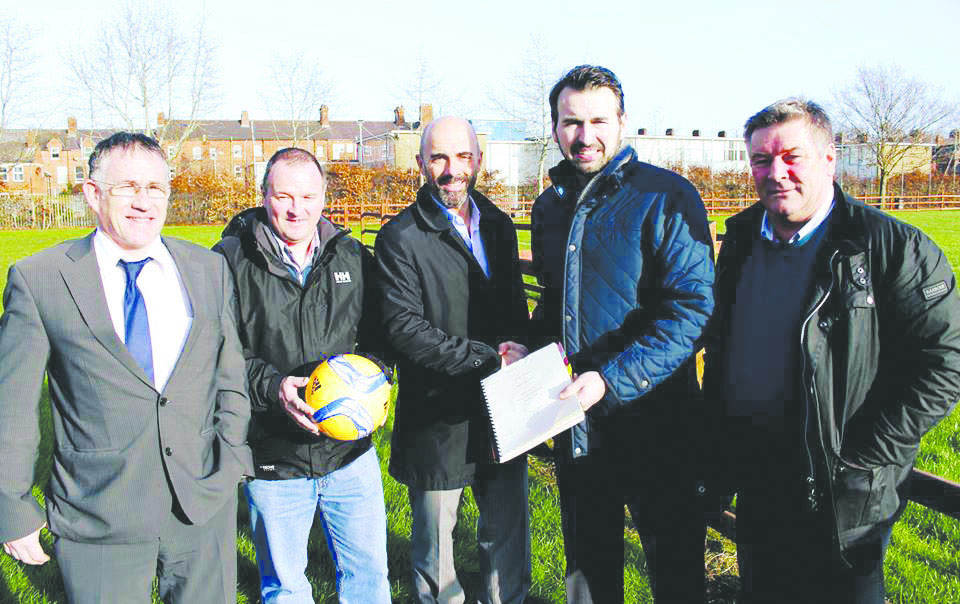 A new partnership agreement between Rosario FC and Belfast City Council has secured the future of Ulidia playing fields for the South Belfast outfit, it has been announced. The facilities were brought under council control two years ago, but a successful re-tender application has ensured the future of Ulidia for the next seven years as part of the partnership agreement with Rosario community group. Speaking about the new partnership agreement, Rosario FC chairman, Pat McGonigle said he was delighted with the outcome. “I’m absolutely delighted that we have retained the Ulidia pitch,” he said. “The Ulidia playing fields are fundamental to Rosario FC by the sheer numbers of the football side of things. It's a community asset as much as it is a football asset. “Our motto is very much a sense of ‘Rosario in the community’ and we are very lucky and privileged to have Ulidia as part of our community. “Ulidia is Rosario's home and for the last 20 years has been entwined in what Rosario is all about. “It is the most beautiful tree-lined playing fields that I have ever seen and it really is a very special facility which has a very long and significant history within its tradition of the Ormeau Road community, hosting the first international game in Europe between Ireland and Scotland. “It’s a privilege for Rosario to be its tenants for the foreseeable future. “We were already the incumbent of the previous partnership agreement and we successfully retained the ground under the new partnership proposals and in truth, it was never going to be an issue.” The partnership agreement is just the latest project at the Ulidia playing fields with a development plan already in place to enhance the Ormeau Road facility. The new development plans include a new 3G pitch, a new pavilion, changing rooms and a community meeting room as well as full floodlight planning for the pitch and a running track around the entire perimeter which will also incorporate outdoor gym facilities. The Rosario chairman says the new development plans will help expand the club’s Ulidia playing fields venue to much more than just a football setting. “Parallel with our application to Belfast City Council, we underwent a development plan to enhance the facility,” he continued. “Rosario have endeavoured over the last seven years to expand from being just a football facility. “We have also undertaken various other activities including running clubs, a special Olympics football team and all this proposed is part of our plans. “Our aim is to enhance and increase the entire usage beyond just soccer.” Rosario is the biggest community soccer club Belfast with over 700 playing members and they are the biggest representation of any other club in the South Belfast Youth League. The new partnership agreement between Rosario and Belfast City Council has a seven-year term contract, but the council is keen to hand Ulidia over to Rosario as a long-term lease. McGonigle is hopeful that the club’s proposed plans will go towards securing a long-term tenancy agreement for Rosario to be full tenants of the South Belfast venue. “We have full council support for our plans and Belfast City Council are keen to help us achieve a long-term tenancy agreement for Ulidia,” he revealed. “The planning and the development is now in the Belfast City Council working group so we have moved to that level of having this whole thing in place. “In terms of a model business, we can present a solid case to maintain the 3G pitch ourselves and create an income from it to take any financial liability away from Belfast CC. “The funding for the pitch is set to be between £700,000 to £1 million but we are confident that with funding applications, support from the council and what we will do as a club ourselves, it will help generate the income.” The exciting plans maintains Rosario’s unique institution in South Belfast with the club’s rich history of representing nearly 100 years of competitive football and sporting achievement.