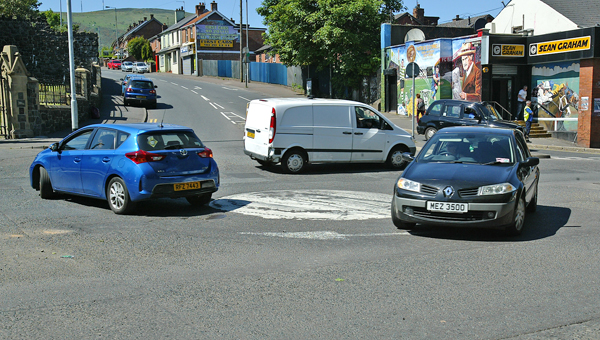 TransportNI are set to tear up a second roundabout in West Belfast.
The mini roundabout at the bottom of the Whiterock Road is set to be removed and a traffic light system put in its place. There are also plans to make the City Cemetery into a one-way system. The scrapping of the roundabout at the junction of the Falls Road and Whiterock Road is to accommodate the Belfast Rapid Transit System due to be operational from 2018.
This month Daily Belfast revealed that the Kennedy Way roundabout is also to make way for the Belfast Rapid Transit System. That news was met by anger from residents living nearby who are concerned that the proposed changes to the roundabout will increase traffic in their area.
Chair of St James’ Forum Breige Brownlee, however, is hopeful that the changes to the Whiterock roundabout will be “positive”.
“Myself and Fra McCann have been on a few site visits,” she said. “The bottleneck of traffic at the bottom of the Whiterock is unbelievable and to get rid of the roundabout and put lights in is the best solution.
“That spot is notorious for accidents. With traffic lights in place there will be more control and more accessibility, there are so many schools in the area as well so anything that improves the safety of our children can only be welcomed.”
A Department for Infrastructure spokesperson said: “As part of the Belfast Rapid Transit scheme on Falls Road/Andersonstown Road between Whiterock Road and Finaghy Road North, the Department proposes to replace the existing mini roundabout at Whiterock Road with traffic signals. This will improve safety for pedestrians and facilitate more efficient traffic management. The proposed measures have been discussed with stakeholders, including local elected representatives on a number of occasions and have received overwhelming support.”
Sinn Féin Councillor Steven Corr said: “This new system is going to solve several problems in my opinion, by creating a good filter system at the bottom of the Whiterock and a one-way system in the City Cemetery tailbacks and traffic jams at peak times will be eased.
“It will also cause less problems and heartache for those attending funerals in the cemetery or those tending graves.”