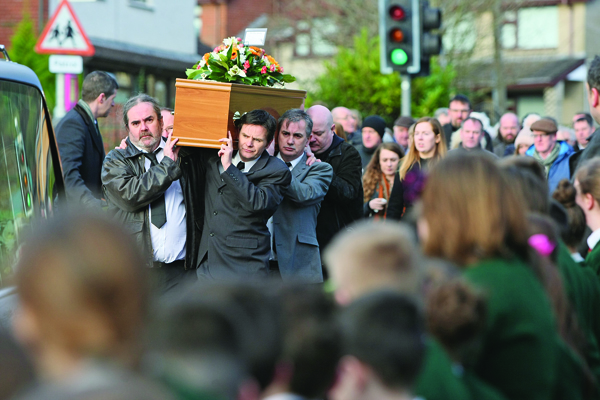 FINAL JOURNEY: There was a large turn-out for Seán Mac Aindreasa’s funeral yesterday

Mr Mac Aindreasa was highly respected in the Irish language community in Belfast and throughout Ireland. One of the founders of Bunscoil Phobal Feirste, the first Irish language school in the north, Seán fundraised tirelessly along with his late wife Áine for the school. He was also a former news editor at the Andersonstown News.

Speaking of Seán with great fondness, Andersonstown New cartoonist Michael McCullough said: “Seán was an unassuming and quiet man, he was highly intelligent, I was very fond of him, we became friends in 1971.

“He was the editor of the Andersonstown News and could always be seen with his briefcase, which was a plastic bag.

“He was a great singer and storyteller. We used to have céilís in the house and Seán was always there singing.

“I was doing my thesis and needed some help with Irish place names, so of course I went to Seán. He opened his cupboard and all the books fell to the ground.

Michael added: “I will miss him. He will be missed for his knowledge, character and wisdom.”

“Seán's knowledge of the language was legendary, and often over the years in our office, when we were unsure of something, someone would suggest that we 'ask the oracle', Seán himself, of course.

“A singer and storyteller of renown far and wide, he was an excellent translator and always ready to share his knowledge with modesty and kindness, as befits a humble and loyal man. We extend our deep sympathies to Seán's son, Séamus, former development officer, committee chairperson and current committee member of Pobal, and to the whole Mac Aindreasa family at this sad time.”

He is survived by his children Colm, Séamus, Caitlín and Alastair and his grandchildren.