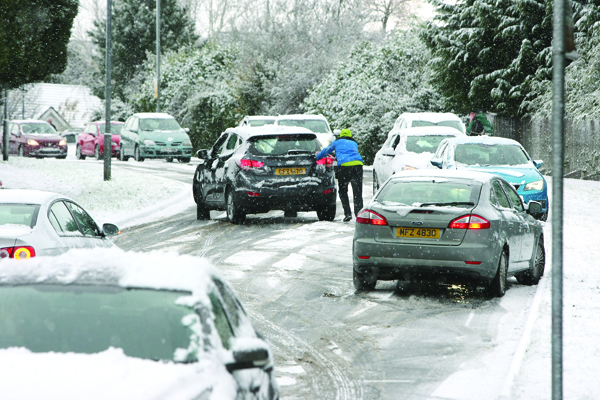 MORE than 280 schools across the North are closed today (Wednesday) due to heavy snow and ice.
Northern Ireland Electricity said about 600 customers remained without power after heavy snowfalls on Tuesday night.
All bus services are now back operating as scheduled after Translink were forced to withdraw services for safety reasons.
John Irvine, Head of Network Services, Department of Infrastructure, said: “The Department’s winter service team has been working around the clock, endeavouring to keep main roads open following snow and ice.
“Additional staff and gritters were deployed overnight for salting and ploughing of the scheduled road network.
“If your journey is essential, motorists should exercise caution, drive with care and allow extra time for journeys.”
A Met Office yellow warning remains in place until 9am on Thursday morning.
“Snow showers are expected during Wednesday evening before a spell of more persistent and possibly heavy snow develops in places during Wednesday night.
“Any persistent snow is most likely to clear east before dawn on Thursday but further snow showers are likely to follow.
“Travel delays are possible on roads with a risk that some vehicles and passengers could become stranded. Delays on cancellations are possible to rail and air travel.
“Some rural communities could become cut off. Power cuts may occur and other services, such as mobile phones, may be affected.”