Standing room only at the Rock for the annual Féile Scribes 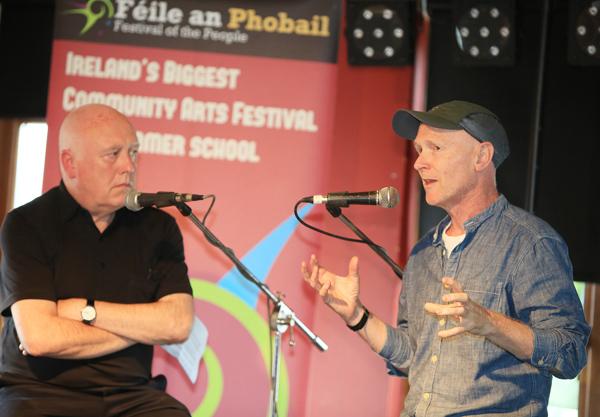 IT was standing room only at the Rock Bar as bookworms packed the room for the annual Féile Scribes at the Rock.

In conversation with Danny Morrison, Paul – who together with Ken Loach has produced such outstanding feature films such as My Name is Joe, the 2006 Palme d’Or winner The Wind That Shakes The Barley and this year’s Palme d’Or recipient I, Daniel Blake – spoke of how a law degree from Glasgow University gave him “a massive introduction to life, one that was very rich, funny and tragic”.

Time spent in Nicaragua during the Contras war of the 1980s and its devastation led Paul to wanting to make a film about what he had seen and so “I wrote to Ken Loach.”

“He phoned me up and asked me to meet him for a cup of tea and that was that,” Paul continued. He described the 80-year-old filmmaker as “a tough collaborator but a very generous one”.

Speaking of their recent film, I, Daniel Blake, described as a “dangerous project of austerity” and which scooped the prestigious Palme d’Or at Cannes this year, Paul said: “I was interested in this ‘striver versus skiver’ mentality that the Tory administration was pushing. Many of the people I spoke to when researching the film were faced with the choice between heating or eating. You have the working poor going to food banks and disabled groups faced with six times the cuts. You have a guy who is a joiner, who gets ill and ends up caught up in the red tape – the devil is always in the detail. There is a systemic nature to pick on the most vulnerable people.”

On the powerful The Wind That Shakes the Barley, Paul described the process “as profoundly satisfying.”

“We began researching this, I remember, around February/March time in County Limerick and all I kept thinking to myself ‘How do you survive this?’ It was that cold. Being part of the Flying Columns, it was definitely a young man’s game and you could only survive through the support of the community. It was very nourishing to do that film.”

The reaction the film garnered on its release was met with controversy from some quarters. “Michael Gove ignored it but went on to say how ‘Republicans were always offered a peaceful way out but refused it.’ This from the Minister of Education, it was like (Henry) Kissinger winning the Noble Peace Prize. The film and its positive reception was profoundly touching for all sorts of reasons.”

The evening was rounded off by a special performance from the Féile Women’s Singing Group who provided the final flourish to the evening as the curtain came down for another year.