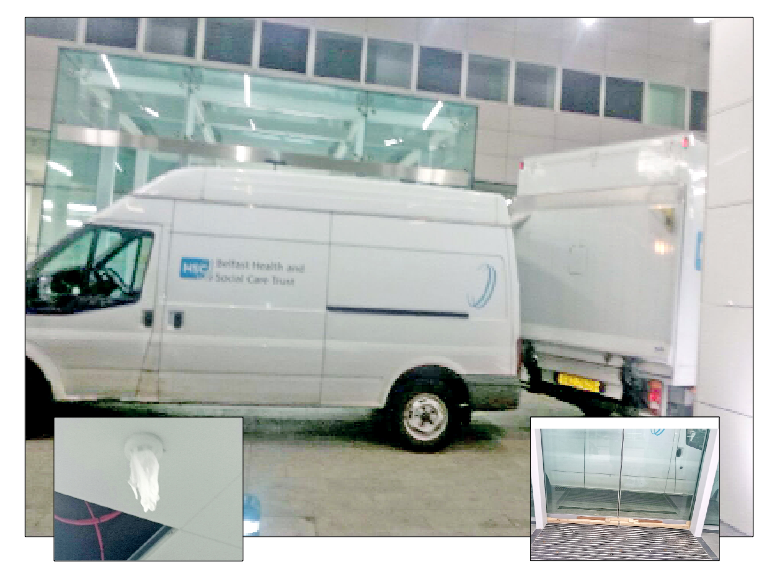 The £152million brand-new Critical Care Unit at the Royal Victoria Hospital may have been designed to deal with every human emergency – but high winds at the weekend saw it struggle to deal with its first weather alert of the winter.

There were farcical scenes at the 12-storey building as Belfast Trust vans were lined up at the entrance to stop the gusting wind damaging doors and glass. But we’ve been told there are even more problems besetting the new facility.

The Accident and Emergency Department at the Critical Care Unit (CCU) opened just this summer to much fanfare after lengthy delays, but already problems are emerging. A source inside the hospital told us that Storm Desmond was not solely to blame for the weekend problems and that wind has been a constant issue. We’ve been told that a ‘wind tunnel’ effect on the ground floor has been blowing tiles from the ceilings. Timber has been nailed to the base of doors at the entrance to stop them from shaking and potentially shattering, while dust being blown through the building is causing smoke detectors to go off. Astonishingly, those smoke detectors are being covered with surgical gloves to stop the alarm sounding.

The 9,000 square foot site was beset with problems even during the construction phase. Corrosion was detected in the closed water systems of the building in October 2012, approximately one month prior to the planned handover. This resulted in the contractor replacing all five closed water systems and it’s thought the cost of the two-year delay and remedial work ran into millions of pounds.

Our source said problems that are occurring now were flagged-up before the A&E opening, but nothing was done.

“The front of the building has two sets of doors,” our source said. “One set is automatic and the other remains closed. Because of the weekend’s storm there was a real danger of the doors coming off their hinges. Estates [the RVH department responsible for grounds and building maintenance] were brought in to see what could be done and in the end they chose to park the box vans at the front to reduce the wind force.

“They have also nailed timber to the floor to stop the doors from shuddering in the wind. These problems have been going on since it opened, not just since the weekend. If there’s even a bit of a wind, it blows right down the corridor and is lifting tiles off the ceiling. This isn’t just down to the storm, it’s happening regularly, the area is so susceptible to winds. So tiles are coming out of the ceiling and the dust is blowing down the corridor and setting off the smoke detectors. The solution they have come up with is to cover the alarms with surgical gloves to keep the dust out, believe it or not.”

With just one floor open in the building – the ground-floor A&E – our source said it’s feared things could get worse as other parts of the building become operational.

“There were concerns brought up in the early phase of the building but nothing was done and now the problems are materialising,” our source said.

“This is the damage with just one floor open out of the 12, can you imagine when all the floors are open? The contractors are everywhere trying to right the wrongs and no doubt it’s all costing more money. It’s just a shame it couldn’t have been got right first time around.”

A spokesperson for the Belfast Trust acknowledged that there are problems at the CCU but described them as “minor”.

“We are aware of some minor estate issues due to recent extreme weather conditions, and these repairs are currently being dealt with,” she said. “Public should be reassured that these in no way affect the running of our Emergency Department which is continuing to provide safe emergency care to all who need it.”