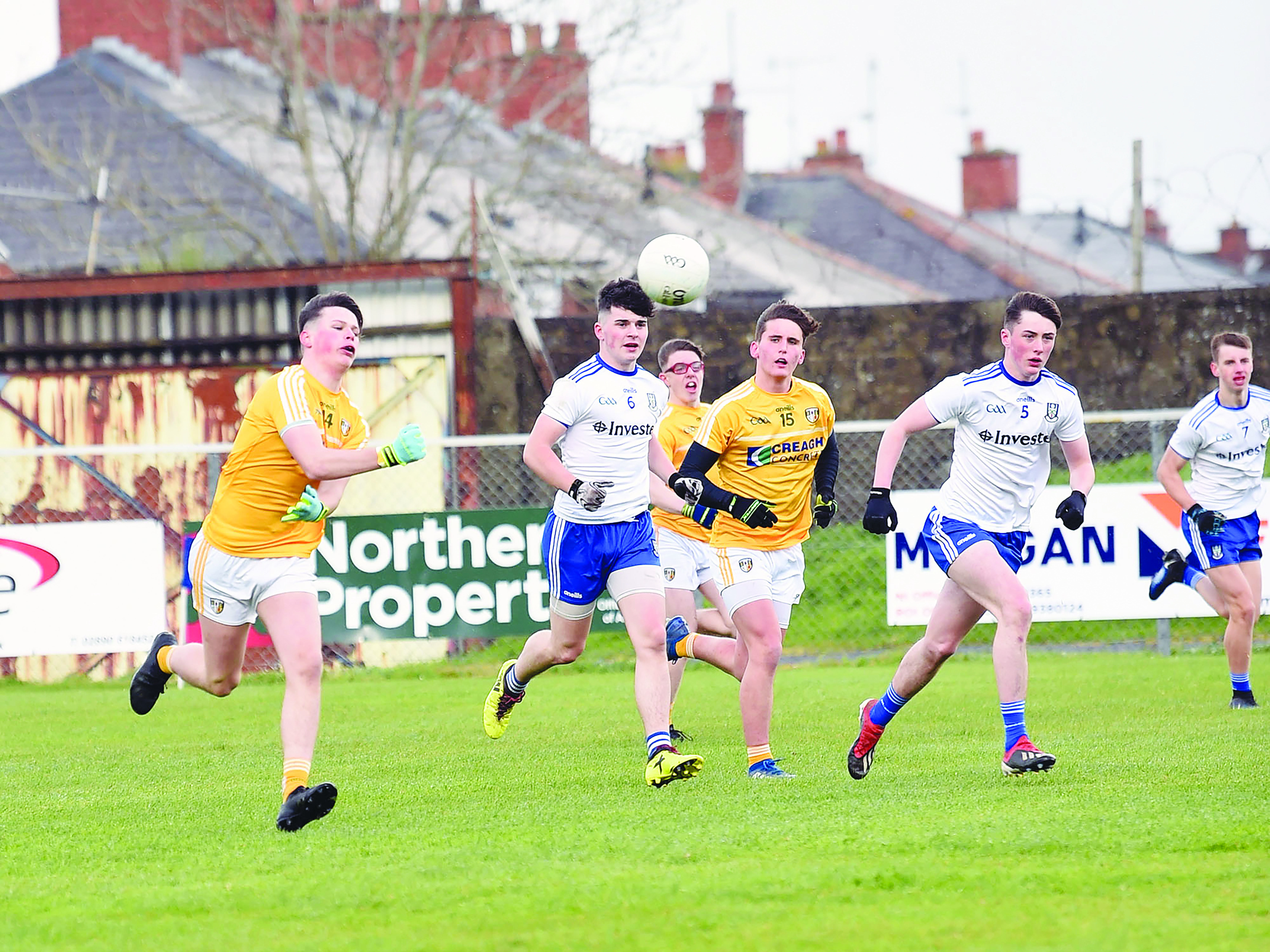 ANTRIM minors will finally get the chance to lock horns with defending provincial champions Monaghan after the Ulster Minor Championship got the green light to proceed.

Corrigan Park will host Sunday’s rematch between the sides after the Farney County survived an almighty scare at the Whiterock Road venue in last year’s Championship.
The sides were set to clash back in October before a second Covid-19 lockdown forced the postponement of all ‘non-elite’ sport.

Although the Ulster Council were adamant that the minor competition was only on hold, Antrim manager Paddy Kelly said he feared the worst.

“I never thought we’d get playing and I didn’t think they’d get this competition back up and running again - especially with it being so close to Christmas,” said Kelly.

“The staging of next year’s league and Championships will have to be factored in too, but fair play to the GAA for getting it going again. It is strange to be out on the training pitch in December, but we are glad to be back.

“It will be a very quick turnaround for the guys who will also be in next year’s minors.

“The minor management for next year can’t even hold trails up they will be under a bit of pressure.”

Back in April 2019, Monaghan travelled to Corrigan Park fresh off the back of a preliminary round win over Down having reached the All-Ireland Minor final in 2018.

However, gale-force winds made a mockery of the game with both teams struggling to make any headway. A late goal from midfielder Joe McNally left Antrim trailing by just a single point (1-2 to 0-6) after Monaghan had been reduced to 13 players, but the hosts couldn’t muster a late equaliser.

The Saffrons exited the Championship a week later when they suffered a five-point defeat to Armagh in the Athletic Grounds.

Only a handful of players from the 2019 squad remain, but they aren’t lacking in confidence heading into Sunday’s quarter-final.

When the game was set for October, Monaghan looked to have a distinct advantage over the Saffrons as they came through a preliminary round thriller against rivals Cavan.

Some nine weeks later, Kelly feels that advantage has diminished and says his side must believe an upset is possible this weekend.

“We are going out on Sunday and we are expecting to get a win - there is no point in going out with any other attitude,” said Kelly.

“It will be very hard, there’s no doubt about it and Monaghan will be worthy favourites.

“I think with the amount of work our boys have done, they are in a really good place and can cause a major upset.”

He added: “It was one of the things that concerned me, the fact that Monaghan had played that preliminary round game. We were struggling with the restrictions even to get a challenge game.

“Monaghan having a really tough opener against Cavan would have been a huge advantage for them playing us the very next week. I think that advantage is gone now to a certain extent. We also had more time to watch Monaghan’s game back and gain a real insight into how they are set-up.”

Monaghan came through an epic battle when they edged out neighbours Cavan in the Ulster Preliminary round tie at Clones in October.

Cavan made the better start with points from Cormac Brady, Shane Tynan and Caolan McCabe while Liam Fay’s goal put the Breffnimen 1-5 to 0-2 ahead at half-time.

However, four unanswered points from the boot of Stephen Mooney put Monaghan right back into contention, but Cavan looked to have weathered the storm late in the game and were 1-7 to 0-7 ahead going into injury-time.

A 1-1 salvo from Mooney, who ended with 1-7 to his credit, gave the hosts a dramatic one-point win.

In stark contrast, Antrim haven’t played a competitive game since late February when they defeated Armagh in the Ulster Minor League.

A series of challenge games against St Pat’s Knock, Carryduff U19s and Derry minors fell through as the cancellation of tournaments and various restrictions took hold.

Antrim had tried to organise a challenge game for a second time against the Oak Leafers last weekend, but the respective management teams opted against it for fear of players being ruled out of the Ulster Championship if they were deemed close contacts. On the plus side, Kelly is expecting to pick from a full squad of players.

The extra time has afforded Cargin’s Conor Johnston the chance to regain full fitness after he suffered an ankle injury in the county minor final win over St Brigid’s in September.

Glenravel’s Ryan McQullian is the only minor injury concern in the Antrim squad after he picked up a quad muscle injury in training, but he is expected to be fit in time for Sunday’s game.

On February 29, Antrim played what turned out to be their first and last game in the Ulster Minor league.

At Dunsilly, they defeated Armagh by two points with the Orchard County then defeating Monaghan a week later.

While Antrim can take come encouragement from their short league campaign, Monaghan displayed commendable battling qualities on their return to action against Cavan in October.

The Farney may have lost a bit of momentum from that win, but they’ll still fancy their chances against Antrim.

On the penultimate weekend of 2020, Antrim minors will line out for just their second game of the season. They’ll need to deliver one hell of a performance against Monaghan to extend their season into the first weekend of 2021.