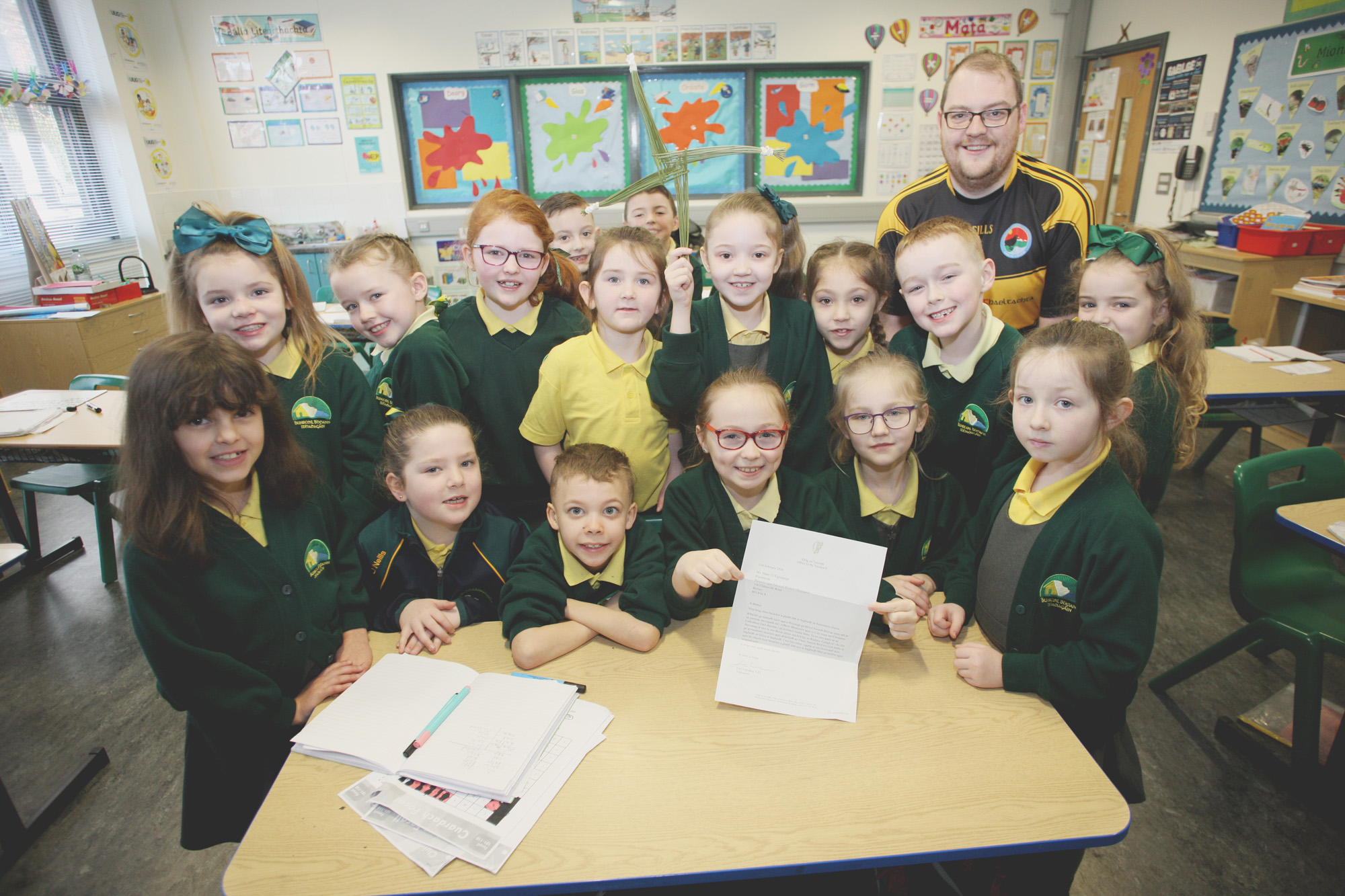 REED ALL ABOUT IT: Teacher Diarmuid Ó Tuama with his class and the letter from Taoiseach Leo Varadkar

THE Taoiseach has written a letter to pupils of a north Belfast Gaelscoil to thank them for sending him a handmade St Brigid’s cross.
Primary four (Rang Ceathair) pupils at Bunscoil Bheann Mhadagáin sent the cross along with a heartfelt letter to Leo Varadkar in the hope that it would offer him protection, support and strength in the coming year.
Excitement was building after Sinn Féin Senator Niall Ó Donnghaile hand delivered the gift to the Taoiseach’s office and tweeted to confirm its arrival.
The kids’ hard work was rewarded when the Taoiseach replied with his thanks.
Rang Ceathair teacher, Diarmuid Ó Tuama, said that his class were delighted by the Taoiseach’s response.
“It took me an hour to settle them all down,” he said.
“I went up on the Black Mountain with Niall getting the reeds – it took us hours to collect them because I didn’t know how many I would need to collect.
“It was my first time doing it with a class, so I came in with enough to do the schools. The car was covered in reeds. We struggled with them for a while when we were making the first ones, but it was well worth it.”
He continued: “We put a video on Youtube and we had Niall in the Senate telling us all that it was happening, so everyone was very excited. A few weeks had passed and we didn’t think anything had come of it, but they were delighted when the letter arrived with the Taoiseach’s signature.”
Eight-year-old pupil and St Brigid’s cross expert, Clodagh Brownlee, said: “We made one for everyone in the class and then we made one for every other class. We started making the crosses before St Brigid’s Day. It was hard work and we were quite hyper. We were quite happy to see the Taoiseach writing his letter.”
She also has some ideas to save her teacher from getting the cold next year.
“My next door neighbour has some of those reeds in his garden. We can get them there next year,” she said.