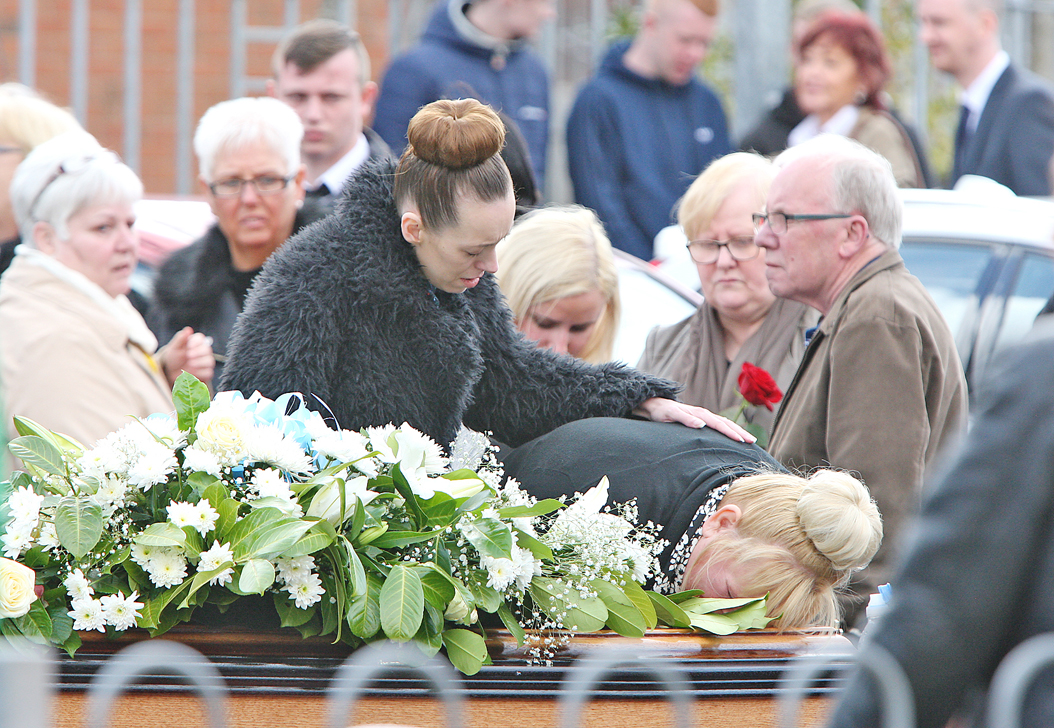 There were heart-breaking scenes in West Belfast this morning as family and friends gathered to pay their last respects to young Aaron Strong.
The 18-year-old lost his fight for life on Wednesday afternoon past after being rushed to the Royal Victoria Hospital where he had been on life support and in a coma for several days. It is understood Aaron suffered a massive heart attack caused by a mixture of prescription medication and alcohol.

A vigil was held for the Strong family on Sunday night attended by Sinn Féin’s Pat Sheehan, who told those gathered that there was more to life than drugs and that help was available. Blue and white balloons were then released as candles were lit in Aaron’s memory.
Aaron, from Glenalina Road in Ballymurphy was due to start a new life across the water in Bournemouth as a joiner and would have celebrated his 19th birthday yesterday (Monday) along with his twin Ryan.

As Aaron’s family made their way to Corpus Christi Church, many of his friends carried yellow roses and wore t-shirts in his honour. Blue floral tributes outside the church spelt out ‘Brother’, ‘Friend’ and ‘Wee Bro’. Many of the mourners carried framed photographs of the former Corpus Christi College pupil and keen mechanic with one carrying the message ‘Gone but not forgotten, rest easy’.
Aaron’s former Workforce Training tutors were also in attendance for the Requiem Mass along with Corpus Christi College Principal Frank Maskey.

During his homily Parish Priest Fr Aidan Denny spoke of how much Aaron loved motorbikes, loved working with bike and car engines and had spent time as a trainee mechanic at Workforce. Fr Denny said Aaron could take a clock apart and put it back together, such was his talent, passion and precision. Fr Denny described Aaron as “a lovable child” and said “God is still with us even in the midst of our utter darkness”.
Fr Denny told those gathered how young people are trying to escape from reality, that they are trying to “fit in to a popular image”.
“Life doesn’t go on forever,” he said. “In the in-between period young people ask, what is it all about?”
Fr Denny continued: “If young people don’t listen to the advice of older people, then listen to Aaron – say no to the (drug) pushers. Do it out of love and respect for Aaron. Learn from Aaron, who is speaking to us today.”

In a direct message to the drug dealers in the area Fr Denny said that it was a “dreadful thing you’ve done pushing drugs”.
As Aaron’s body was brought out of the church his heartbroken mother Annmarie bent down to tenderly kiss her son’s coffin as the funeral cortege made its way to Milltown Cemetery where Aaron was laid to rest.