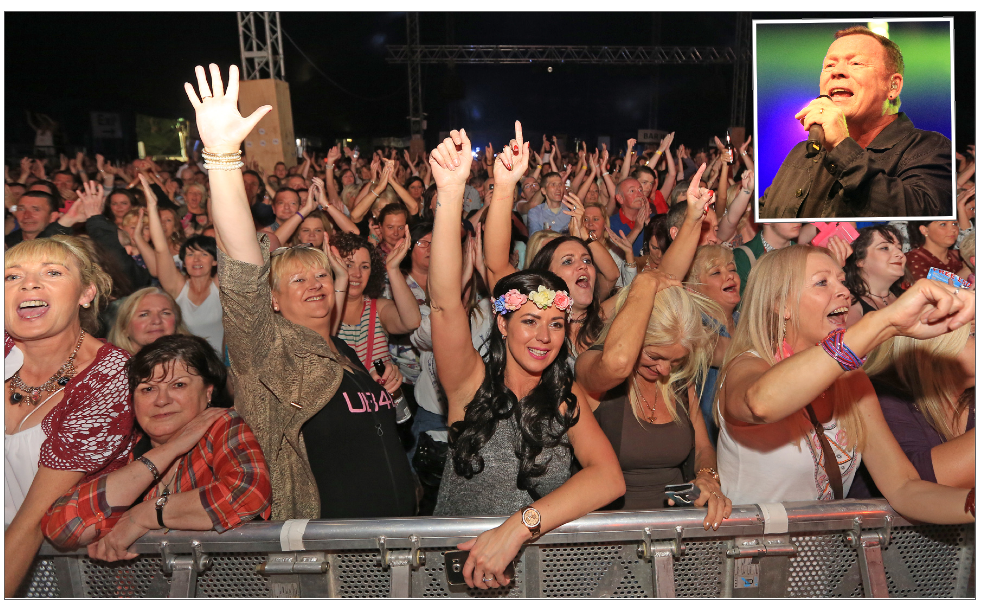 It’s over for another year. With 400 events in ten days, this year’s Féile an Phobail ended with a massive sell-out concert by reggae kings UB40 on Sunday night with the Birmingham band belting out hit after hit late into the night.

Playing their back catalogue to a bumper Féile audience, the heat was bubbling as the summer temperatures soared – pushed up by the sheer number of bodies in the marquee tent – rose as 5,000 party-goers said goodbye to the best Féile yet.

This year’s Féile in West Belfast has seen packed-out venues throughout the week and a half, from debates and talks – the latest being the discussion on the past featuring deputy First Minister Martin McGuinness and PSNI Chief Constable George Hamilton at St Mary’s University College on the Falls Road – to comedy, music, literary events, plays and tours. Thursday’s Scribes at the Rock was no exception and could have sold out ten times over such was the queue to get into the local bar to listen to best-selling writer Marian Keyes, the creator of Love/Hate, Stuart Carolan and Henrietta McKervey read from their work.

After the hugely successful first weekend at the Big Top in the Falls Park, which culminated in the Marc Almond/Human League 1980s night, Féile-goers were licking their lips in anticipation for the final three days at the same venue, and they weren’t left disappointed.

On Friday Scottish comedian Frankie Boyle had them rolling in the aisles with his side-splitting take on today’s world, while on Saturday night the Wolfe Tones returned after a sell-out show last year to play some rebel-rousing renditions on the eve of the internment anniversary.

And then to Sunday night when UB40 fans from across the city and beyond descended on West Belfast for the concert of the year. Red Red Wine, One In Ten, Rat In Mi Kitchen et al were belted out and the lyrics returned with interest by a rocking Féile crowd.

We ask the same question every August – how are Féile going to top this next year? It’s a challenge they seem to relish and rise to year after year.