EXCLUSIVE - WATCH: Our man in Wuhan - we talk to the Lower Ormeau teacher in the city which birthed the Coronavirus 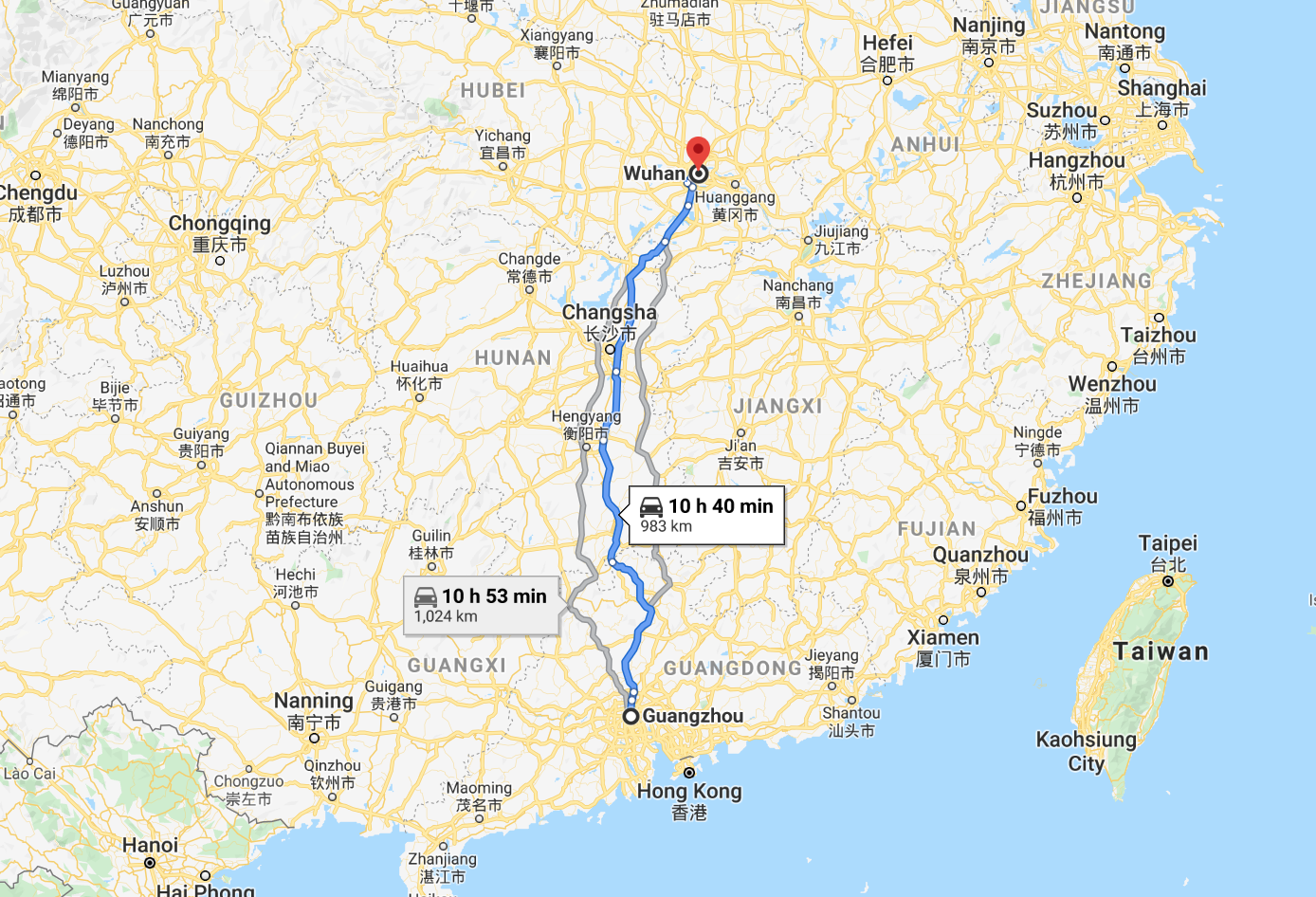 CHINATOWNS: The city of Wuhan lies inland from Shanghai and around 600 miles north of Guangzhou.

Belfast teacher Seán Ó Garmaile (interviewed via Zoom above) is living in the heart of a city which will forever be linked in the public mind with the coronavirus: Wuhan.

But far from being locked down, he is back at work, taking part in regular five-a-side football matches with his pals in the local gym, and even enjoying the occasional visit to the pub for a pint.

All that is possible because in this city of 11 million souls, everyone has been tested for the coronavirus — and they can prove it if asked by officials who monitor entry to all facilities because their health documents are stored on their smartphones QR codes.

The same smartphone is also tracking the owner’s location, enabling the authorities to get in touch swiftly with anyone who has been close to a person who has contracted Covid-19.

But the precautions don’t stop there. The 28-year-old Lower Ormeau man, who has lived in Wuhan for the past six years, says that before he enters any public building, railway station, restaurant or bar, he must consent to have his temperature taken.

If he has a temperature, entry will be barred and he will be told to self-isolate and seek medical assistance.

Séan left Wuhan with his girlfriend Victoria on January 21 — when first reports of the virus, believed to have originated from bats sold in Wuhan’s ‘wet markets’, were gripping the city. He expected to be away for two weeks but in fact, as the pandemic consumed Wuhan, he found himself barred from returning to the city and sheltering in the metropolis of Guangzhou until April 8.

Today in Wuhan, masks are worn by everyone outdoors and in public buildings. Gloves are worn by many. Physicial distancing is not mandatory because the citizenry has been tested and have their health details uploaded to their smartphone. But Wuhan, says Seán, is very changed from the city he knew before the virus struck.

Surprisingly, since the world continues to point its finger at China for covering up the first reports of this strange new disease — and for punishing Dr Li Wenliang who first sounded the alarm — total deaths from Covid-19 in the vast country of 1.4 billion people stand at just 4,634. Total deaths in Ireland, north and south, stand at around 2,400 – for a country of 6.8 million people.

In Wuhan, there were no new cases of Covid-19 reported between April 3 and May 10. Small clusters since have been indentified and those affected have been hospitalised and their contacts quarantined.

You can watch part of our Zoom interview with former Coláiste Feirste pupil Seán Ó Garmaile above or read the edited transcript below and on Otter.ai.

Máirtín Ó Muilleoir for Belfastmedia.com: What are you doing in Wuhan?

Seán Ó Garmaile: Well, for the last six years, I've been working here as a foreign language teacher. And obviously  it's a bit tough now for teachers and a lot of workers over here in Wuhan and China because of the virus. We left Wuhan on the 21st of January.

BelfastMedia.com: Have you seen the contact tracers out and about doing their work?

Seán Ó Gormaile: No, not per se. We spent so much time in Guangzhou, we didn't really get a chance to see the contact tracers. By the stage we came back on 8 April things had started to become calmer. The height of it would have been February and March for the contact tracers. On the eighth of April we came back by train. We had to get a form and a sign stamped from the local health department in Guangzhou that said that we had done a temperature test and that we were safe. We had to get a document stamp from the hotel that said, yes, they have been staying here since they last entered China. So that when we landed back in Wuhan, they had all the information they needed.

Seán Ó Garmaile: It (the virus) was kind of picking up (when we left). The way that we looked at it was, "okay, this is good. We're getting out of Wuhan while is going on. By the stage we come back, it'll be kind of sorted." How wrong we were.

So we arrived back to a much quieter city. This was quite a quite a lively city all the time, but when we came back it was so much more quieter. Not really that many people about, nobody really on the streets.

Even after we came back on the eighth of April. It still took a couple of weeks before people got that kind of feeling of comfort where that, if they left their home and went into a public place with strangers, they felt that they could be safe with the restrictions and the safety guides that the Wuhan government had set up. Any public area where you go, train or bus, shops, shopping malls, public parks, restaurants, you have to show your QR code which then they scan and they can see where you've been. (They check) that you filled in the application to say, yes, you are healthy.

They also take your temperature to make sure and I think anything above 37.5 or 37.6, they refuse to allow you in and you are told you have to go to the hospital. They tell the local authorities, "this here person's temperature is high". They've done such great work to get from where they were to where they are now and they don't want to ruin that. So if there's even a slight opportunity that you might have it, they'll send you to the hospital.

Belfastmedia.com: When you went to the pub the other night, they took your temperature at the door?.

Now everybody has to have the acid test done. So if you haven't done your acid test, you won't be allowed in. It comes up on your QR code that you've done it and that you're green.

Belfastmedia.com: Wuhan is still far from normal? Do you see people in HazMat suits?

Seán Ó Garmaile: Hazmat suits are for mostly workers within the hospital or anybody who deals directly with people who might have have had it (Covid-19) or might have it now. Anywhere you go everybody wears a mask. It's almost impossible to leave your home without wearing a mask and without being told off (if you don't).

Belfastmedia.com: Do you feel safe or do you feel afraid to be in Wuhan which is a name known throughout the world now and associated with Covid-19?

Seán Ó Garmaile: When it first broke out we tried to play it as safe as possible with resources that we had. I mean, at one stage it was like, "okay, we're in Vietnam, this is going well". But then the Coronavirus started to travel and spread very quickly. So that was then becoming more and more dangerous. And we just thought, right where is it that we can go and given that my girlfriend is Chinese and we had very limited options except for going back to China.

We just thought we won't go back to Wuhan obviously, because we can't and it's not safe. Se we'd go the second safest place which we thought then was Guangzhou (about 600 miles away). I could go home; we could try and get a visa for Victoria, my girlfriend to come back. Where else could we go but at the end of the day, just try and stay as far away from Wuhan as we could while getting back into China. At the time Guangzhou was fairly low down on the list for the Coronavirus. Their policies weren't as strict because there were less people getting the virus there.

Belfastmedia.com: People talk about almost being on a war footing against Covid-19. Do you feel that?

Seán Ó Garmaile: Yeah, I do. It doesn't matter whether you're working in a hospital or even just working in a shop, we all respect (those people) and are very proud at the effort that everybody's put forward. This is still far from over. So everybody still has a long while ago before we see a typical normal day.

Belfastmedia.com: Are you free to come home (despite the restrictions)?

Seán Ó Gormaile: I'm free to come home if I find the right flights to get back. Obviously, trying to fly back home right now is very difficult for everybody. So many airlines are saying yes, we're open and then they're not.

Belfastmedia.com: People here are bursting to get back out. Do you think that's a wise thing to do without the type of precautions and protections they have in Wuhan including these huge community contact tracing operations?

Seán Ó Garmaile: For Ireland, it's still a long way to go. Given Wuhan was once the worst place to be, you have to look at some of the ways the Chinese dealt with it. (They had) the strict stay-at-home policy. At the very beginning after the train stations and the airports locked down, you weren't allowed to leave your home. If we're going to beat this, a lot of people are going to have to follow China's example. Stay indoors as much as you can, you should only be leaving home for the bare essentials. Masks and gloves are huge things here. Social distancing is probably one of the biggest ways to avoid contracting the Coronavirus.

Belfastmedia.com: If you were to contract COVID your App would tell the authorities everybody you've been in contact with?

Seán Ó Garmaile: If I got on a bus or a metro, and it came out that this person had it, they could trace back to where this person has been. And so then anybody who's been in contact with them for I think a week to two weeks, then they can message to say you've been in the same place as this person, We need you to come in and do testing.