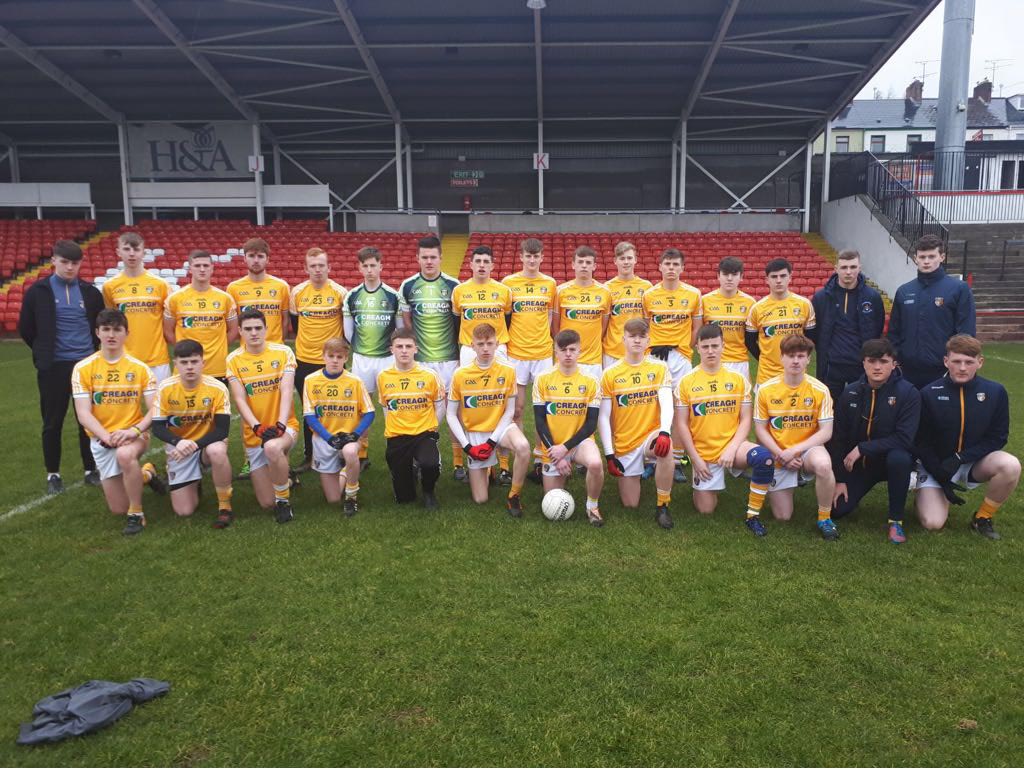 IT is the Ulster Minor Football Championship, but not as we know it. Gone are the days when they crowds on the terraces would swell during the second half as the province’s best minor footballers went toe-to-toe.

The minors no longer act as the curtain-raisers for the main senior events. That honour is now reserved for the U20 Championship.

These days, the minors (U17s), are shoehorned into a condensed fixture schedule. Antrim’s provincial opener against Fermanagh this Saturday is a standalone fixture on Saturday evening at Corrigan Park.

The attendance won’t reflect the effort and endeavors of the players and their manager, Paddy McLaverty over the last number of months.

The St Comgall’s clubman was involved with the U16s last year, but Hugh McGettigan’s decision to move up to the U20 position created a void which McLaverty was only too happy to fill.

However, he was only appointed at the end of January, just four weeks before their Ulster Minor League opener, and the Antrim boss admits they have been playing catch-up ever since.

“I have been with this squad now for the last four years. I was involved with the U16s last year,” said McLaverty.

“They have as good a chance as anyone. They have been unlucky in that we were late getting started. We weren’t appointed until the end of January.
“We have been playing catch-up all year. Fermanagh will be going into the game as firm favourites.

“They are a good bunch of lads and that’s why I came back to manage them. I am confident in their ability and I think they can go out and do a job – it is just getting them to believe in themselves.”
McLaverty is adamant that the decision to play the Ulster Minor Championship as a standalone competition is one that must be looked at again.
Last summer, the Antrim minors enjoyed a fairytale afternoon in Ballybofey when they claimed the scalp of the then Ulster champions, Donegal after extra-time in front of thousands of spectators.

McLaverty insists that every minor footballer deserves their big day out in the Championship and believes the Ulster Council should revisit the decision.

“These players need as much encouragement as anyone to play for the county, they need the big days out,” stated McLaverty.

“They get very few of them. Young boys are walking away from the sport hand over fist.

“The more we take the big days away from them, the more they are going to walk away.

“They have changed the format of it and they get more games, but they need the big crowds and the big venues. That needs to be looked at again. We want young players to be playing and staying in the GAA, not walking away.”

He continued: “They are going up to Corrigan Park on Saturday but, bar the parents, what kind of a crowd are they going to get?

“There is no big hype about the game and that’s unfortunate for the lads. This is their opportunity to represent their county and it feels very flat. I feel for them.”

McLaverty also bemoaned a sense of what he called ‘apathy’ towards the county minor set-up this year.

As well as the late appointment of the minor management team, which includes Garry Duffin of Moneyglass and Ballyhegan native Pete McKeever, McLaverty claimed the unavailability of several key players hindered their chances in the Ulster Minor League.

“Player availability this year has been shocking,” said McLaverty.
“The Buncrana Cup (U16) squad have been going right up until last week.
“We had a couple of boys involved with St Ronan’s, including our first-choice ’keeper, Luke Mulholland and a few guys playing with St Mary’s (Magherafelt).

“We didn’t have those players and it is a big ask for us. We also had the South Antrim Championship going on throughout our league campaign and you had boys going back to play for their clubs and so boys were picking up injuries.

“There are lots of demands being placed on a 17 year-old.

“There are other players who didn’t come on board, who we know could do a job for us, and that’s disappointing. I don’t know whether it is an Antrim thing or if it is just down to apathy.”

While McLaverty can find fault with the structures, he insists he cannot question the heart and commitment of the players at his disposal.

Antrim’s fine record in recent years is also a source of encouragement for the Saffrons as they begin their 2018 Championship campaign.

The last time Antrim lost a first round tie in Ulster was back in 2013 when they suffered a 4-20 to 3-6 defeat to a Monaghan side who went on to win the Ulster title.

Antrim claimed a hat-trick of wins over Fermanagh between 2014 and 2016 before last year’s stunning victory over Donegal in Ballybofey.

McLaverty’s side also claimed a hard-fought two-point win over Saturday’s opponents in the league earlier this month and he is hoping they can give a good account of themselves at Corrigan Park.

“It (Antrim’s record) gives us a sense of belief and it is all about confidence,” said the St Comgall’s clubman.

“We were late starting and we came up against the likes of Donegal and Tyrone so that was very difficult.

“They ran Tyrone close at Dunsilly and they gave a good account of themselves. They have been together from U14 so they are a close-knit unit.

“Some boys could have chosen other sports and one or two could have gone and played soccer, but they stuck together. I have kept the stats and they had the best attendance of any development squad I’ve been involved with over 15 years.

“When I looked at the group Whatsapp chat after the Fermanagh game, I could tell what it meant to them - they are a committed bunch.”
McLaverty will be without the services of St Brigid’s ace Paul Bradley (knee) for the forthcoming campaign, but has an otherwise full panel to select from.