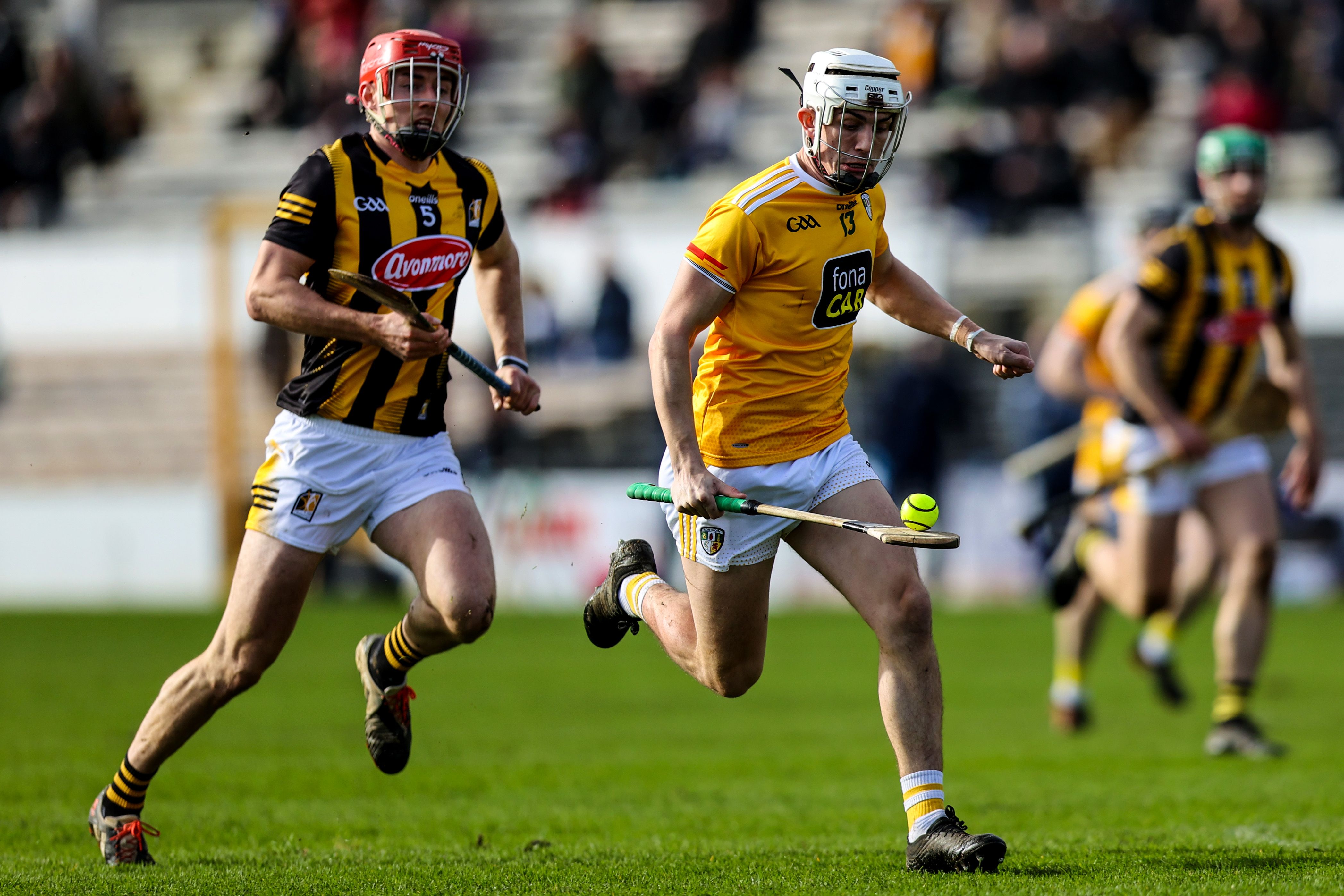 ANTRIM ultimately came up short in Nowlan Park as Kilkenny took the points in this Allianz Hurling League Division 1B clash, but the hosts were left to breathe a huge sigh of relief in the end.

Had it not not been for the quick reflexes of goalkeeper Darren Brennan in stoppage time to thwart Domhnall Nugent who got a touch to a dropping free, the visitors would have grabbed the lead, but as it was, Kilkenny broke with John Donnelly steering over an insurance score.

This was a game played out in tricky conditions with a heavy wind matching the underfoot conditions due to pouring rain overnight, so it was a day dominated by wides - 18 for Kilkenny to 11 for the visitors.

Despite this being far from a dirty game, referee Patrick Murphy dished out eight yellow cards to Antrim including two to corner-back Niall O'Connor who allegedly picked up his second for 'holding' five minutes from time. Kilkenny had three names in the book, bringing the total number of cards flashed to 11.

In the end, it was a little frustrating for Antrim and manager Darren Gleeson felt this was one that just got away.

"It's hard to reflect on it straight away after the game," he said.

"There's a level of frustration there in the first half when we had the elements. We had a great start and only scored five points are the first seven or eight minutes when we had 1-1 on the board.

"We were very wasteful; Kilkenny were wasteful too with he swirling wind and the underfoot conditions were not like (what would expect). Nowlan Park is the best pitch in the country over the last few years going by the awards but it wasn't in good nick there for either team - everyone is playing on the same surface.

"When we had our purple patch we didn't make enough of it. They got a purple patch after half-time and went seven points up. We came back hard at the end, but it was a disappointing result."

Antrim were quick to establish themselves as Keelan Molloy - a late change for Daniel McKernan - fired over within the opening minute and then came the Antrim goal on four minutes as Niall McKenna went long and Seaan Elliott got out in front of Conor Delaney to gather, spin towards goal and finish low to the net.

Kilkenny got off the mark with James Bergin clipping over on five minutes and while he and Ciaran Clarke traded frees, the conditions began to play havoc with the Kilkenny shooting. The wides tally had reached 10 by half-time to Antrim's seven as the strong crossfield wind dragged shots off course.

Still, the visitors were keeping their noses in front with Neil McManus floating over a lovely score and after Martin Keoghan responded, a Clarke free and trademark Eoghan Campbell point when bursting out from the back left five between the sides on 26 minutes.

Kilkenny were enjoying plenty of possession and looked stronger in the rucks, but were not making an impression on the scoreboard until the final 10 minutes of the half when they seemed to get into a flow with Paddy Deegan and Tom Phelan pointing before Bergin found his range from a free.

In stoppage time, Phelan made a superb catch over the head of Paddy Burke off a poc-out and galloped towards goal. His shot at goal was blocked but Keoghan was on hand to whip the loose ball to the net to put the hosts ahead for the first time, but a Clarke free left the teams locked at 1-6 at the break.

John Donnelly took over the free-taking duties for Kilkenny in the second half with Bergin replaced by Walter Walsh and he nudged his side ahead before Padraig Walsh and Huw Lawlor fired over.

Then came the second Kilkenny goal on 46 minuets when Billy Ryan tidily gathered and zipped a pass into Mikey Carey who in turn found Keoghan to fire home his second of the day.

With points from Donnelly and Padraig Walsh following to push the gap out to seven and Antrim unable to get anything going in attack, it seemed this game was only going one way, but not so as a Daniel McKernan point on 53 minutes appeared to spark them back to life.

Seaan Elliott added another from a tight angle and then on 58 minutes, Conor Johnston got onto a break, closed in on goal and his shot got the better of Brennan to hit the net and leave just three in it.

Points from Keoghan and Walter Walsh steadied Kilkenny, but after McManus nailed a free for Antrim, one in reply from Donnelly was followed by a yellow card to Antrim corner back Niall O'Connor for alleged holding way down in the corner, well away from the play - his second of the game - and the visitors were down to 14 with five to go.

There was still time for late drama as Johnston played a delightful ball into McManus who rattled the net with two to go and in stoppage time, a dropping 65 was met by the stick of Nugent with Brennan reacting to keep it out and from the breakaway, Donnelly made an intercept to steer over a point that finally settled this game and banked the points for Kilkenny.

"We were getting scores but were only getting them, on their own, not in a patch together," added Gleeson.

"When a team gets 1-2 on you and you only reply with a point, or when we were just after getting as goal and they came back with two points, that's how it felt to me. You need to be putting a patch of scores together.

"It was a rearguard action there and the boys did a great job out there. We had 20 men out on the field and it (defeat) wasn't for the lack of effort we were beaten."