OPINION - GERRY ADAMS: An Taoiseach is not a United Irelander 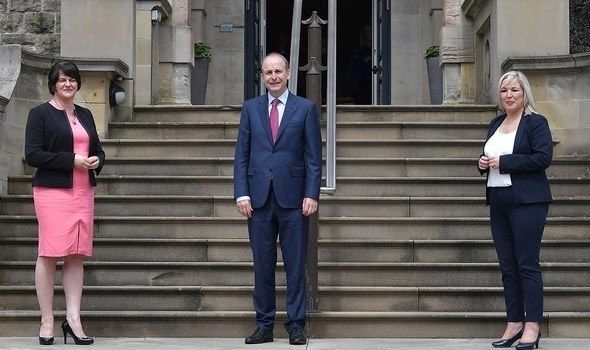 QUESTIONS: Michéal Martin has been reluctant to release any details about the ‘Shared Island Unit’ he has set up

PARTITION is almost 100 years old. But for democrats across this island, and in the Irish diaspora, for all of that time it has always been the great wrong that has to be righted. But it is not only a historic wrong. It is also a great injustice now, today. It remains the greatest cause of instability and division on our island.

Where stands the leader of Fianna Fáil ‘The Republican Party’ on ending partition and achieving Irish Unity? In the past Fianna Fáil leaderships have proven particularly adept at exploiting the widespread desire for Irish unity and the republican rhetoric of a ‘united Ireland’ in order to win votes. And of course many Fianna Fáil voters and members are republican. However, at no time has their party leadership made a serious effort to develop a strategy, in keeping with their constitutional obligation, to end partition and “unite all the people who share the territory of the island of Ireland ...”

Why? Because both the Fianna Fáil and Fine Gael leaderships are comfortable with partition. For decades they have alternated in power, defending a status quo that protects their interests, and those of their friends in the political establishment.

Fianna Fáil and Fine Gael’s Ireland is best represented by the map of the island first produced by the Irish government several years ago which drowns the North in the Irish Sea and Atlantic. We are left with a landmass which bears no resemblance to Ireland and with a new shoreline that stretches from Derry through Donegal, Tyrone, Cavan, Fermanagh, Monaghan, and Armagh and Down to Louth.

An Taoiseach Micheál Martin is not a United Irelander. Under his leadership the traditional rhetoric of the leadership of Fianna Fáil, whose first aim according to its own constitution and rules is to “restore the unity and independence of Ireland as a Republic”, has been systematically eroded.

In March 2017 he committed his party to publishing within months a 12-point plan which would prepare the way for the reunification of the island. He also told the Irish Times that as part of this he intended publishing a White Paper on Irish Unity. Neither the 12-point plan nor the White Paper was ever published.

The Fianna Fáil leader also pledged that Fianna Fáil would organise in the North. When Éamon Ó Cuiv and Seanadóir Mark Daly attempted to do that they were sacked from their senior party positions. In 2017 Pearse Doherty and I met Micheál Martin to seek his support to establish an Oireachtas Committee on Irish Unity as a means of focusing the debate on this issue. He said no.

Micheál Martin’s alternative proposal, published this year, is to establish a “Shared Island Unit”. Not once does the Programme for Government reference the constitutional obligation on an Irish government to achieve a United Ireland. The words ‘United Ireland’ or ‘Irish Unity’ are entirely absent. And there is no reference to the commitment in the Good Friday Agreement for a referendum on unity.

If this week has proved anything, it's that that 'Shared Island Unit' would really wanna get a move on. #NoOneLeftBehind @MichealMartinTD @LeoVaradkar @EamonRyan @merrionstreet

In reply to a query from online news outlet ‘The Detail’ – published on  August 14 – the Taoiseach’s department could still not provide “any guidance on the annual budget or staffing levels of its newly-promised Shared Island Unit. A department spokesperson could also not explain to The Detail how regularly Micheál Martin plans to meet with the unit, what new high profile roles, if any will be created in the unit or how it will interact with northern voices.”

The Taoiseach cannot be allowed to do this. He has to involve all party leaders in a real process of engagement. Mary Lou McDonald, leader of the Opposition, has to have a central role in this. There has to be a positive and inclusive conversation that many within civic nationalism and some within civic unionism have been calling for.

Sinn Féin is for a shared island as part of our vision of a new Ireland – a united Ireland.
However, it is not inevitable. It will not happen because we simply wish or hope for it. It will only happen if we work for it. Therefore the responsibility of political leaders is to lead and to plan. That is especially true of the Irish government.

The Shared Island Unit can play a useful role in this, along with the establishment of a Citizens’ Assembly; a White Paper on Unity; a Joint Oireachtas Committee; the creation of additional all-island institutions; and eventually winning a referendum on Irish unity.
Micheál Martin must set out in clear terms the objectives of the Shared Island Unit; its terms of reference; staffing and resources that will be made available to it; outline how the Unit will engage with the public; with Oireachtas members and parties; with the Assembly and Executive in the North; with local councils north and south; with the diaspora; and with other stakeholders, including the business community.

Brexit has changed the political landscape and at a time when the British government appears determined to crash out of the EU, media speculation is rife that it is threatening to tear up the Withdrawal Treaty and Irish Protocol, the desire and demand for Unity – even if only as a means for the North to stay within the EU – will only grow stronger. The demand for a united Ireland is also being fuelled by the political and demographic changes that are taking place in the north.

Consequently, this Irish government is facing a stark choice. Does it ignore all of this and ostrich-like stick with a policy approach which seeks to ignore the growing clamour for Irish unity? Or, does it undertake a genuinely serious attempt to discuss how we share this island and share our future?
The debate – the conversation – around Irish unity has been ongoing for years. It’s not going away. On the contrary, interest in and support for Irish unity is growing at the same time as support within England for maintaining the British union is diminishing. As the debate around Irish unity increases our collective endeavour should be to shape that debate in a constructive and positive direction and to encourage the widest possible engagement between all strands of opinion on the island of Ireland.