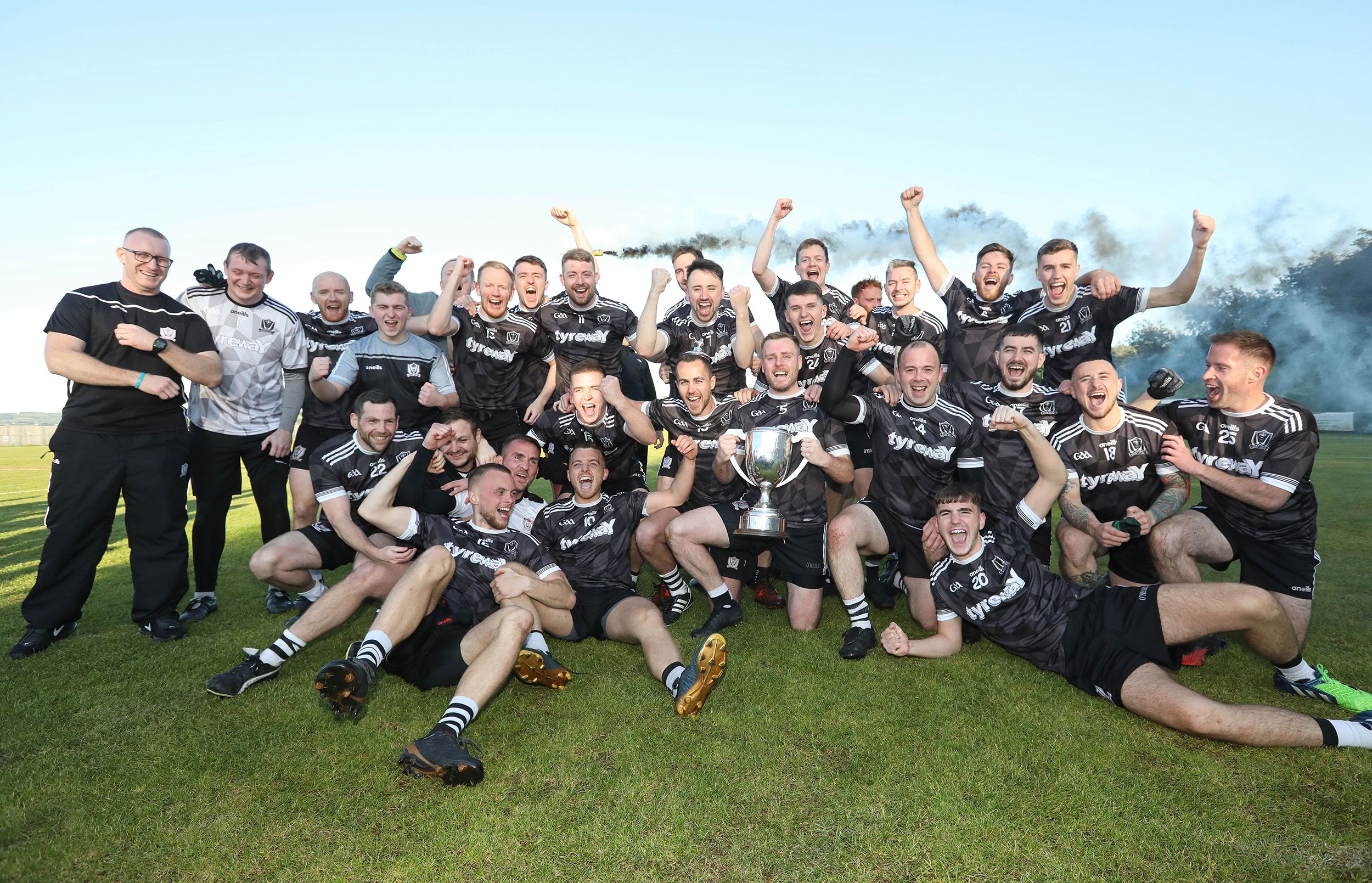 ARDOYNE claimed their first Junior Championship title since 2012 with a remarkable three-point success over St Comgall’s, but the winning margin doesn’t go close to reflecting the drama at Hightown on Saturday afternoon.

A disallowed goal and a black card for St Comgall’s, a red card and a near 40-minute spell without a score for the victors Ardoyne meant that the fate of Saturday’s game wasn’t known until deep into stoppage time.

It took the Kickhams right up until the dying minutes of the decider to regain their composure in front of the posts after a dream start for the North Belfast side. They led 3-2 to 0-2 at the first water break thanks to goals from Cormac Mullan, Conor McLaughlin and Aidan McNeill.

However, they failed to score again until Mullan converted a free on 58 minutes while McLaughlin was dismissed in the opening minutes of the second half.

St Comgall’s rallied and, playing with an extra man, they ate into the deficit before drawing level on 55 minutes having had a goal ruled out moment earlier.

Crucially for the Antrim town outfit, they couldn’t edge ahead and Ardoyne finished strongly with points from Kevin McLaughlin, Joe McNeill and Mullan to clinch the title.

Ross Carr’s side could not have dreamt of getting off to a better start as they sought to claim a second Championship win over St Comgall’s having defeated their opponents by 11 points when they met at The Cricky in the group stages back in August.

In the early stages of Saturday’s game, it looked as though they would claim an equally facile victory as they carved open the St Comgall’s defence with every opportunity.

Right from the throw-in, Joe McNeill won possession and launched their first attack with Conor McLaughlin playing Mullan through on goal and a cool finish gave Ardoyne their first goal after just 27 seconds.

After that early setback, Miles Devine settled St Comgall’s with a free on three minutes, but they were rattled again by the concession of another goal.

This time it was McLaughlin who finished after playing a neat one-two with Declan McComick as Ardoyne moved five ahead on seven minutes.

Once again, Devine replied with a free, but the pattern of the game wasn’t to the advantage of St Comgall’s as the Kickhams bagged their third major.

McLaughlin was again the provider and Aidan McNeill headed straight for goal and he applied a deft finish into the left-hand corner of Ben Johnston’s net to leave Ardoyne 3-0 to 0-2 ahead with 12 minutes gone.

Things went from bad to worse for St Comgall’s as, acting on the advice of his linesman, referee Sean Laverty issued a black card to Patrick O’Connor for a third-man challenge in the build-up to Ardoyne’s third goal.

A free from Mullan and an excellent point from play from Aidan McNeill had Ardoyne nine clear at the first water and St Comgall’s were already looking like a spent force.

Yet, whatever Adrian Dougan and Paddy Quinn said during the water break obviously worked as St Comgall’s gradually worked their way back into the contest.

A brilliant point from centre-forward Joseph Webb got them off and running on the restart while Devine plundered his first from play soon after.

In the closing minutes of the half, Webb landed his second when his shot bounced in front of Paul Fisher and over the crossbar as Ardoyne’s lead was cut to 3-2 to 0-5 at the break.

The Kickhams almost had a fourth goal in the early stages of the second half as McCormick forced Johnston to make a great save after the Ardoyne attacker opted not to take the offensive mark.

However, Ardoyne were soon reduced to 14 men when Conor McLaughlin was ruled to have kicked out at St Comgall’s full-back Ruairi Griffin.

The Antrim men profited straight away with a score from Dylan Murdock before Webb landed his third of the evening.

A dipping effort from Peter McAuley almost found the top corner of the net and Ardoyne were relived to see the ball drop over the crossbar rather than under it as St Comgall’s piled on the pressure.

At the other end, Ardoyne simply couldn’t get the ball to stick as St Comgall’s forced multiple turnovers before building from the back.

A quick free from Devine set up Murdock for another point as Ardoyne’s lead was reduced to two points midway through the second half.

St Comgall’s thought they had taken the lead when substitute Paddy Quinn Jnr fired into the net moments after coming on, but the umpires adjudged that the ball was wide before fellow sub Darryl McNeill played the ball back across the face of goal.

Undeterred, St Comgall’s continued to press home their numerical advantage and they soon drew level with back-to-back points from Devine.

With five minutes of normal time remaining, St Comgall’s looked set to move ahead and claim victory as nothing seemed to be going for Ardoyne.

Kevin Lynch won a badly needed free for his side 35 yards from goal and Mullan held his nerve to convert to end a 39-minute scoring drought for the Kickhams.

From the resulting kick-out, midfielder Kevin McLaughlin rose highest and, opting against the mark, he drove straight at St Comgall’s before firing over an inspirational point.

It looked to have finally broken St Comgall’s, but they were still in the hunt going into injury-time as Devine converted a free to leave one between the sides.

Yet, the North Belfast men weren’t to be denied and a sideline for Ardoyne was worked to Joe McNeill and he swung over the insurance point with his left boot.

With the last kick of the game, Mullan converted his third free of the game to leave Ardoyne 3-6 to 0-12 victors following a tense, dramatic and typically entertaining Junior Championship final.