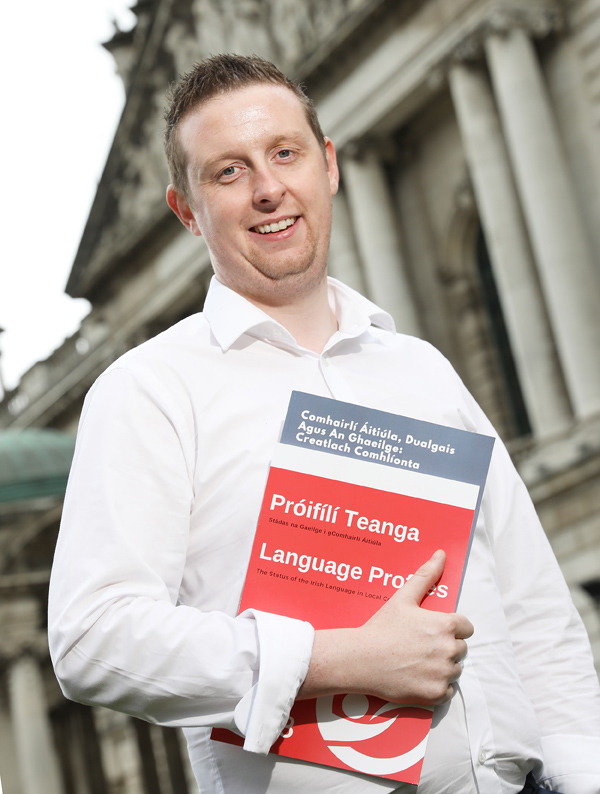 BELFAST City Council has appointed its first Irish Language Officer in its history.
The announcement was made on Tuesday, making Belfast the fourth council in the north to appoint an Irish Language Officer. A second officer with responsibility for Ulster-Scots, sign language and other languages has also been appointed.
The posts are jointly funded by Belfast City Council and Foras Na Gaeilge.
The announcement was made during an event in City Hall presenting research by Conradh Na Gaeilge and the Committee on the Administration of Justice into how the north’s 11 councils are complying with their obligations with regard to the Irish language.
Speaking at the launch Chief Executive of Belfast City Council Suzanne Wylie said: “I am absolutely delighted to be here today to celebrate the Irish language officers scheme and to welcome our Irish Language Officer Colm Mag Uiginn.
“We also have our Irish Language Pfficers from Fermanagh, Omagh, Derry and Strabane here as well. It’s also great to see representatives from the Irish language community here today.
“This council, earlier on this year under a different Mayor, launched a five-year language strategy and we are now seeing the practical out-workings of that strategy including the appointment of the Irish Language Officer.
“On behalf of myself and the other councils who have benefited from this scheme we thank Foras Na Gaeilge for this initiative.”
Ms Wylie added: “Languages are something to be celebrated. Belfast has a close association with the Irish language, many of our place names are taken from Irish language whether it’s Béal Feirste, Bóthar na bhFál or Bóthar na Seanchille, Belfast heritage has got an enduring relationship with the Irish language going down centuries.
“I think in many ways Irish speakers in Belfast were pioneers. Today we acknowledge the Irish language community here, in this city and across the north.”