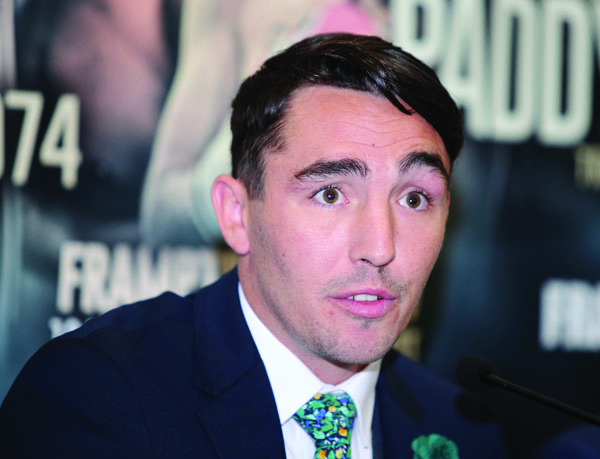 Jamie Conlan is thrilled to finally get his big chance

IT has been a series of ups and downs as a professional boxer for Jamie Conlan, but finally the West Belfast man has got the chance his thrilling career deserves with a crack at a world title.
Filipino, Jerwin Ancajas (27-1-1) will put his IBF super-flyweight belt on the line against ‘The Mexican’ at the SSE Arena on November 18 in what promises to be another roller-coaster ride for the West Belfast man.
Conlan turned pro in 2009 and after a solid enough start with five wins approaching the end of 2010, the road became a little more bumpy.
A scheduled fight on the undercard of Carl Frampton v Gavin Reid in December of that year in the Ulster Hall fell through with the weather playing havoc with his opponent’s travel plans and it was a sign of things to come with fights and cards falling through on top of injury.
He found himself boxing late at night long after the headliners had finished in front of a crowd you could count on one hand, so to be here with a world title on the line is an exceptionally proud and exciting tie for the affable 30 year-old.
“I have known about it for a few weeks now, but I never let myself get overly excited about it because I have been let down in the past with big shows and big fights,” said Conlan at the Ulster Hall on Wednesday.
“Finally now, the press conference is here and everything is done and dusted so I can let myself enjoy it. I’m just looking forward to getting back over to camp with Danny Vaughan and get down to the nitty gritty.”
Conlan got a close look at Ancajas back in July when the Filipino successfully defended the title in Brisbane, Australia against Teiru Kinoshita on the undercard of his promoter, Manny Pacquiao’s loss to Jeff Horn.
With Michael Conlan boxing on that Top Rank-promoted card, Jamie was of course in attendance and while the fight with Ancjas was far from sealed at that point, he had an inkling they would meet and paid close attention.
“I was at that fight in Brisbane,” he confirmed.
“My brother (Michael) was at the same time scale throughout fight week, so I got to see him up close and personal. I got to see his emotions and reactions. I paid attention because the lads at MTK told me to get ready for the WBO or IBF because I am highly ranked with them both.
“I really rate him. I know I will have to be at my very best to beat this guy, but it’s something I wholeheartedly believe I can win. I’m very excited to put on a big performance for the Belfast fans.”
Conlan has been on numerous Frampton undercards going back to the Ulster Hall days and then when he too was promoted by Cyclone Promotions before switching to MTK – then called MGM Marbella.
Conlan’s fully aware just what type of atmosphere he will be boxing in and is excited to be back in the SSE Arena I front of a partisan crowd.
“I always used to love fighting on Carl’s undercards before. It’s very hard to describe,” he recalls.
“I remember fighting on one of his early Odyssey fights and standing there thinking it was unreal, but it has got bigger and bigger.
“To be part of this in a big fight is an emotion I will have to control on fight week and on the night.
“It’s a big stage, a big atmosphere and the biggest audience I will have ever fought in front of with BT Sport, so it’s a dream come true.”