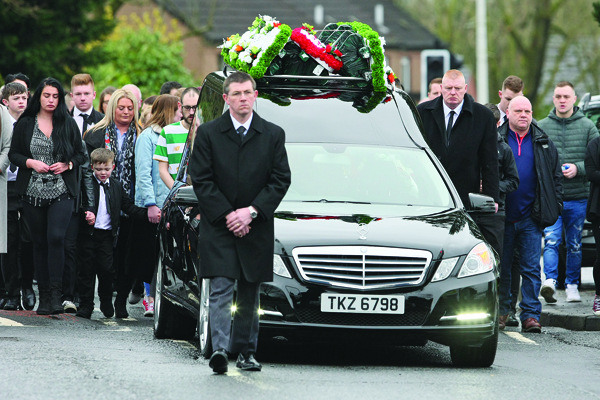 Mourners gather at the Church of Nativity on Monday

MOURNERS at the Requiem Mass for murdered 28-year-old Ray Johnston heard how those who carried out his killing “will have to face God for what they have done”.
Mr Johnston was shot dead last Tuesday night at the Glenbawn Avenue home which he shared with his partner and her 11-year-old daughter.
Many of those who attended the funeral Mass at the Church of Nativity on Monday wore Celtic shirts with Mr Johnston’s name printed on the back, and many carried red roses. Floral tributes to Mr Johnston read ‘Partner’, ‘Friend’ and one said simply ‘Daddy’.
During his homily Fr Aidan Keenan described Mr Johnston as a “loving son, father, stepfather, fiancé, brother, friend and neighbor”.
“That someone would deliberately shoot a fellow human being is unbelievable,” he said. “No-one deserves to die in a such a way. Those who feel they have to right to be judge and jury must remember they have to face God for what they have done.”
Fr Keenan spoke of how Mr Johnston’s friends and family would have described him as a “jack of all trades, a lovable rogue” and that how in his past “he may have done things he regretted”.
Fr Keenan said that since meeting his partner Eileen he had “started a new life, he had settled down and seemed happy”.
“Raymond has brought everyone together in grief. We must pray that he is the last to die in such a tragic way and that we find a way back to peace.”
Interment took place in Crumlin Cemetery.