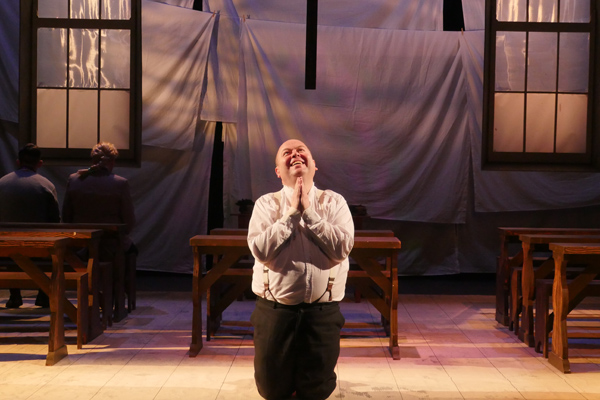 THE treasured short stories from the prolific pen of Cork’s finest scribe Frank O’Connor are returning to the Lyric Theatre this month due to unprecedented demand.

In God Bless the Child, Frank O’Connor’s stories of life growing up in rural Ireland are universally regarded as classics of their kind and in a coup for the Belfast theatre, three of his most comedic stories: My Oedipus Complex, The Genius and First Confession are brought together within a single play which will guarantee a hugely entertaining and uplifting night of theatre.

The audience are introduced to the characters of Michael, who goes into mortal combat with his father when he returns from the First World War; Larry, a genius who can’t understand why the world can’t keep up with him; and Jackie, who has the grim task of not only making his first confession and communion, but must also deal with his very boisterous grandmother into the bargain.

Director Patrick Talbot told the Andersonstown News that the work of one of the “greatest short story writers ever,” and its themes are “timeless”.

“We had our first national tour at the Lyric Theatre last year and the response to the play was fantastic. It’s basically down to that that we are back for a three-week run this time. I have taken three of Frank’s better-known stories and merged them into one. First Confession is probably the most well read story in Ireland,” he said.

“In it you have the character of Jackie who is absolutely terrified of making his first confession, he has the fear.

“The fear of the unknown, of the darkness of the confessional, of the priest and of the devil. We have all been there and the audience recognise this and identify with the character. It’s hysterically funny to see it come alive on stage.”

Patrick continued: “Frank O’Connor’s stories are timeless, they are classically universal and last year I found the Belfast audience really identifying with these stories on particular rites of passage.

“Frank O’Connor’s work, his short stories are embedded in a generation and it was how we, at school, got an introduction to that particular style of short story writing form.

“We have toured all over the island so far from Frank’s native Cork, Galway, Dublin and have a three-week run at the Lyric which we are really looking forward to.

“I’ve said before that you could take the play to Calcutta as long as the audience understood what was being said such are the familiar themes and characters portrayed.”

God Bless The Child will be performed at the Lyric Theatre until August 21. For more information and for tickets visit www.lyrictheatre.com