Hynes hopes to be on-song against Kennedy 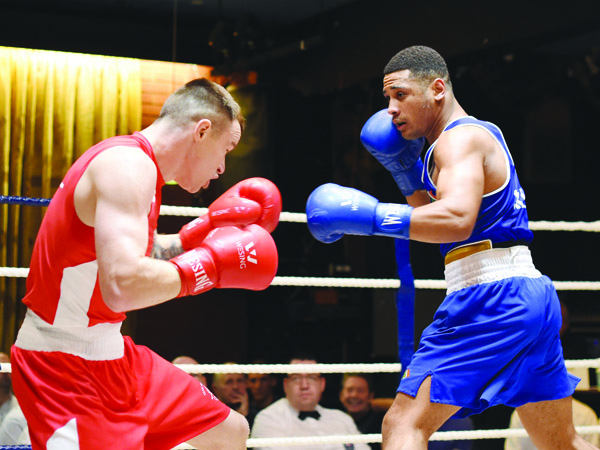 Caoimhin Hynes (blue) entered this year’s Elite Championships at the unfamiliar weight of 81kg, but has reached his first ever final

AHEAD of a potential switch to the pro ranks later in the year, Belfast boxer Caoimhín Hynes says he is determined to make a name for himself inside the ring rather than being remembered for a terrible incident outside of it.

Last year, Hynes was left fighting for his life after being stabbed following a night out in Belfast city centre.

The Holy Trinity prospect suffered a large wound to the side of his face and still bears the scar from two operations. Just two inches lower and Hynes wouldn’t have survived.

Hynes has since made a full recovery and was back in the ring last September and confirmed his well-being by winning a gold medal at a multi-nations tournament in Barcelona.

A feisty Ulster semi-final defeat to Steven Donnelly in November left Hynes pondering his future in the amateur ranks, but he returned to action last weekend with a stunning split decision win over Tony Browne at the National Stadium to book his place in the finals of the National Elite Championships.

“I don’t really want people to remember me as the boxer who was stabbed,” stated Hynes.

The National Elite Championships were the last thing on the mind of Hynes just last week when he was on holiday at Amsterdam.

Entered at 81kg (light heavyweight) rather than middleweight, Hynes insists he has no problem with the weight, but plans to return to 75kg after this weekend.

“I had entered a few days before. I was in Amsterdam for five days – thankfully I got a bye through to the semi-final,” said Hynes.

“Michael Hawkins wanted me to enter and give the finals one last go.

“It was a good win (over Tony Browne) in the semi-final. He was beaten in last year’s final by Joe Ward and was expected to be the next champion.

“I didn’t feel too bad at the weight. I was a bit worried about my fitness, but I didn’t show any tiredness in the fight.

“I feel solid at the weight and I can bring my hand speed into play. It isn’t a weight I’ll be staying at. Long-term, I’ll be back down to middleweight.”

Having lost out to Donnelly in the Ulster Elites in November, Hynes stressed that he won’t change things too much as he feels he boxed well in the semi-final at the Dockers Club after being deducted a point for use of the head.

“The only thing I have learned from the Donnelly fight was that I should have had a faster start in the first round,” said Hynes.

“Other than that, I don’t think there was any lessons to be learned from that fight. I thought it was a close fight and it was one I could have won, only for the point lost, but I think I boxed well.

“I know he (Kennedy) has won a good few Irish titles. He is tall and likes to box on the back foot.

“We have a gameplan there to use against him and, hopefully, it works out on Saturday night.”

Hynes added that a touted move to the World Series of Boxing (WSB) is no longer an option and the West Belfast fighter will seek a switch to the pro ranks following this weekend’s championships in Dublin.