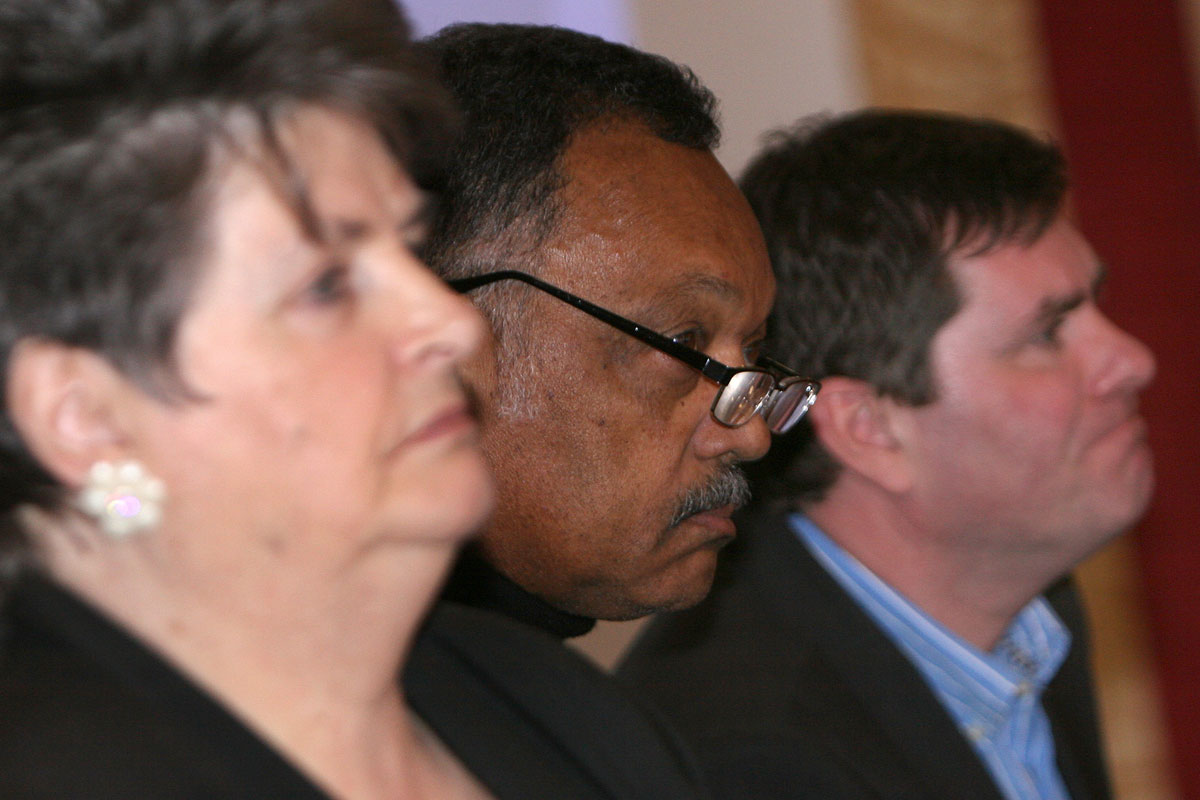 THE Reverend Jesse Jackson is to open a new chapter in the history of victims’ champion Relatives for Justice after the group was cleared to work and raise funds in the United States.

The official launch of RFJ US takes place in New York on September 22 at the Prince George Ballroom near Madison Square Garden.

Among those supporting RFJ in launching their new grant-aid-raising status will be veteran US civil rights leader Jesse Jackson who has been hosted by RFJ on two previous occasions in Ireland and who is a committed RFJ supporter.

Speaking to the Andersonstown News, RFJ Director Mark Thompson said the process has taken time and investment on the part of RFJ but in the long run this can “hopefully be worthwhile”.

“Having passed strict vetting and governance procedures within the US undoubtedly provides US citizens with an assurance and confidence that their donations will make direct contributions to our work with an approved organisation. And for all those making donations they are equally entitled to tax relief on those donations,” he said.

The awarding of the grant-aid status also means that the organisation is a more attractive prospect to partner with US-based academic work within the universities that have an interest in Ireland in bidding for resources for conflict resolution, legacy, transitional justice and direct support work to victims and survivors of the conflict.

“Already RFJ have been collaborating with several academics from several US universities around transitional justice work and the legacy of the conflict in the absence of an independent truth commission,” added Mark.

It also means that RFJ can apply directly for grant-aid to many of the US grant-making foundations, this opportunity having not been previously available in the absence of a  the all-important certificate 501c3.

“There are lots of people who over the years have made donations to RFJ from within the USA and annually the AOH has always been very supportive of RFJ and many other groups through their practical and financial support.

“We are hoping to build on that goodwill which has always existed, and to let everyone who makes a donation to get tax relief and importantly to be able to give something back in return by way of activities and educational events within the USA. We can also host conferences, seminars and engage in work that is collaborative in the broader interests of improving the lives of those most adversely affected by the conflict, from truth and justice issues, to therapeutic and counselling and other necessary support services.

“The more awareness about what is happening and what people can do and support then the more positive it will hopefully be for direct beneficiaries here that we support.

“Given the relationship that we have also built up within America, and in particular with the Reverend Jesse Jackson and his work within inner cities, and especially in Chicago through his Rainbow Coalition Charity, we hope to tap into a wider US audience interested in human rights work and international solidarity with our work here in Ireland and to which we can also reciprocate support.

“We also aim to build on the success of visits we have had over the years to the US and establishing positive and productive relationships in setting the groundwork for securing support and creating more awareness of the key issues affecting victims of the conflict.

“The recent Sean Mac Bride award to our Chairperson Clara Reilly is recognition of that solid work and Clara will travel to the US in October to receive the award from the President of the AOH at their annual gathering in Philadelphia.”

However, the role that the Rev Jackson is playing is also vital, says Mark.

“This is a huge endorsement of our work by someone who is respected globally for his stand for and work on civil and human rights. The Rev Jackson knows of the struggle for truth, justice, human and civil rights and of the human cost and consequences of that struggle, its violations and abuses in the absence of democracy and justice.

“And thus he connects directly with the work that we are engaged in with families affected by the conflict here. He has met with some of those families during his visits to Ireland and his support is always welcome.

“We are particularly pleased that he is so closely associated with our endeavours within the US.”

It is also hoped that the Sinn Féin President Gerry Adams TD, who will be in New York on the big day, may also play a role in the launch and that the current Speaker of the New York City Council, Christine Quinn, will also attend.

The New York City Council Speaker is also no stranger to the excellent work of RFJ as she too has visited their Belfast HQ on a number of occasions and invited the group to New York where she hosted the group’s Remembering Quilt.

New Jersey AOH President and National Board member Sean Pender will also play a pivotal role in the launch, having worked closely with RFJ over the past decade, as will Kate McCabe who has been instrumental in her support for securing this new status with RFJ within the US.

n Anyone seeking to attend the event, or interested in finding out more about the work of Relatives for Justice, can contact Mark Thompson, Director of RFJ, by telephone on 02890 220100 or by email at admin