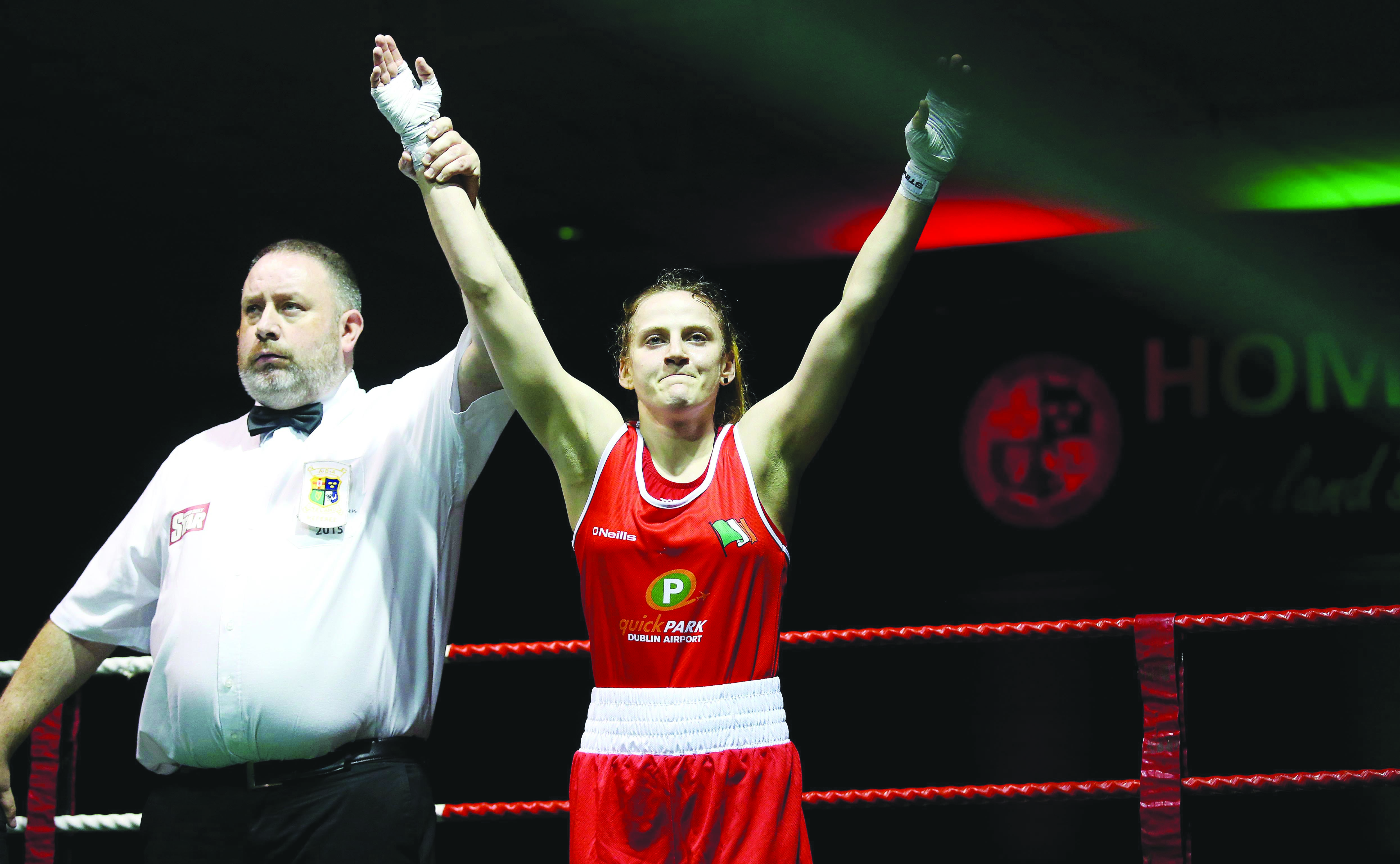 THE Olympic dream is very much on course for Michaela Walsh as the Holy Family girl claimed her sixth Irish title and first at flyweight when dethroning six-in-a-row chasing Ceire Smith at the National Stadium on Friday night.

The Commonwealth Games’ silver medalist put in an accomplished display of counter-punching and slick movement against the Cavan girl to put herself in pole position for next year’s Olympic Qualifer in Turkey and then the World Championships in Kazakhstan.

The Blacks Road girl began Friday’s final confidently, landing with a solid right counter in the opening seconds that set the tone for the opening round as her timing and movement saw her land scoring blows, but also mixed it up when the opportunity arose.

Smith was a little more aggressive in the second, marching forward and landing a one-two, but Walsh always had an answer as she replied with a three-punch combination of her own. This seemed to take the wind out the defending champion’s sails as by the third, Walsh was happy to stand and trade as her speed, agility and flashy combinations saw her pull clear going into the final round where the West Belfast native darted in and out of range, landing the eye-catching shots to score an impressive victory on all three cards.

“I had been flat-out training for it,” said the new 51kg champion.

“This is my sixth Senior (title), but it’s the most important one because if I hadn’t have won it, that would have been me out of the (Olympic) qualifiers so it’s a great feeling to win – unbelievable.”

Walsh had previously collected National Elite titles at 57kg and 54kg so continuing her success by going down, rather than up in weight is a unique achievement.

“Everything went to plan,” the Holy Family girl continued.

“Training had been hard work, but for moments like that I would do it all again.

“I had been training every night with my daddy (Damien) and we came up with a game plan.

“It worked better than we thought it would. I felt in control throughout the fight and people were coming up to me after saying I made it look easy against someone who has just beaten the world champion.

“I read before that she was saying she didn’t think I would be strong at the weight, but I had a lot of help from SINI (Sports Institute NI) through their strength and conditioning programs.

“They helped me with a nutritionist as well, so I came down in weight the right way by doing the right training and it’s the best I’ve felt at 51kg since the Commonwealth Games.

“I have been flying and that showed on the night.”

It really was a family effort with the 22 year-old’s father, Damien in her corner and younger brother, Aidan also helping push the Olympic hopeful on in preparation.

“My daddy had everything down to a tee,” said the delighted champion.

“He does everything for me so that win was for him. “After my brother won at the Commonwealths (Youth Games), I was motivated even more to keep it in the family because we are always behind each other.

“During training sessions, he was coming down and helping me because when I’m tired, he pushed me on so it’s great to have my daddy and brother with me – they are always there and help me go the extra mile.”

A short, well-earned break is on the cards for Michaela ahead of what promises to be a massive 2016. Reaching the Olympic Games at the first attempt is the hope, so efforts will be doubled in the New Year. Like any amateur boxer, reaching the Olympics is the pinnacle so with one major hurdle cleared by emerging from the National Elite Championships, the Games are that little bit closer for the affable Walsh.

“It would be great to qualify before May (World Championships) so I could just go to the Worlds to get prepared for the Olympics,” she explained.

“Kazakhstan are coming here in January for a training camp, so that will help me and a couple of internationals will help me keep ticking over until the qualifiers.

“Throughout training (for the Seniors) I was aware this was the most important year to win them. Ceire had her chance to qualify for London and only missed out by one fight, so it was great to get the win over her with the level she is at.

“Now, people are saying to take a break because from January it’s going to be grueling with qualifiers and training for Rio, which is my dream. I’m one step closer now, so I’m starting to live it.”