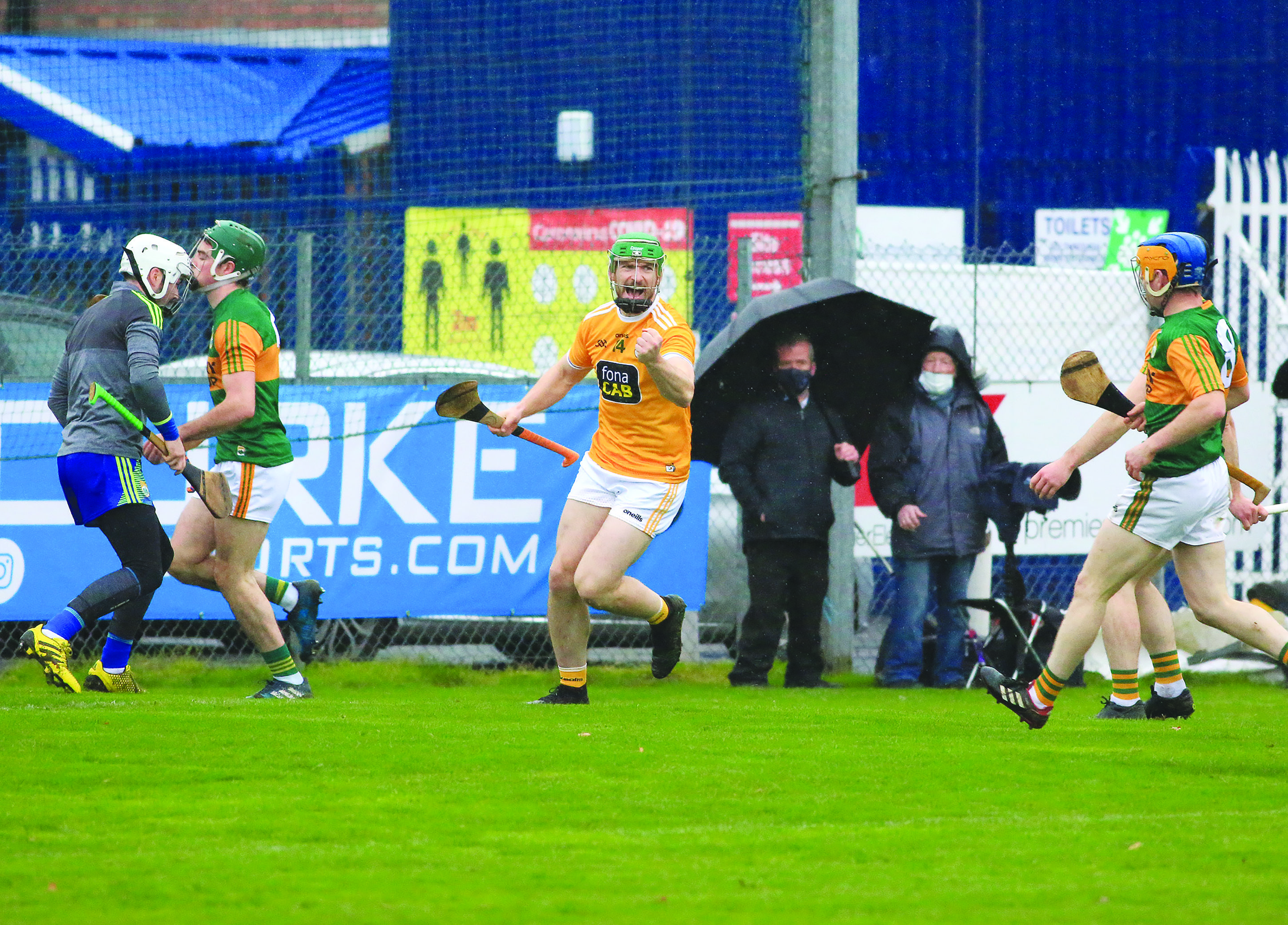 Conor McCann celebrates after finding the net against Kerry last month, which was the sixth consecutive game the Creggan man had struck for goal

“I DON’T really class myself as a goalscorer but somebody has to be on the end of the plays and the way we’re playing suits the game,” says Antrim captain, Conor McCann.

A run of seven goals in six games that began away to Kerry in Tralee back in March and finished against the same opposition in Corrigan Park last month was almost extended against Meath when a low shot in the second half whistled inches outside the far post.

He laughs off when it’s put to him that he is now in the ‘prolific’ bracket, but as team leader he says it’s all about those who have gained the yards further out the field to get the ball inside where he has been stationed at full-forward.

“The ball is just coming in at the right time and I’ve positioned myself right, but there’s great work going on out the field with boys carrying the ball,” he continued.

“I’ll not disagree with it happening as somebody has to be on the end of it, but if we can keep the scoreboard going then I’m happy enough - it doesn’t matter who does it.”

Like many of his team-mates, McCann has experience of playing in some huge games for club and county including the 2013 All-Ireland U21 final when Antrim were undone by a rampant Clare side. There was also an All-Ireland Club Junior final in 2014 when Creggan faced Waterford’s Ballysaggart, drawing the game at Croke Park before finishing the job after a replay in Mullingar.

“You look back on the big games you have been involved in and try to take anything you can from them,” he recalls.

“I’ve been lucky enough to play in a couple of All-Ireland finals and this is going to be another one. It doesn’t take away from the occasion, but it’s nice to have that going in, knowing what it is you are preparing for and a lot of the lads would be the same.

“Cushendall players have been in a Club final, Dunloy in Ulster finals and a lot of good stock there, so we will be hoping we can take what we can from that.”

Playing the game and not the occasion is vital if Antrim want to reach the heights they have done all year and the experience of those who have played on the big stage in the past will help younger members of the team prepare for this final.

Any dip in performance will be punished by a Kerry team who may have been beaten in their three previous meetings this year, but in each game weren’t too far away and won’t need a second invitation to pounce on any opportunities that may be offered.

“That’s what we’re trying to get into the lads over the next few days,” added McCann, a UX/UI designer.

“Maybe not having a crowd in Croke Park will help a bit as there won’t be as big an atmosphere or sense of occasion because of it.

“We’ll be preparing as well as we can and won’t be taking Kerry for granted. This will be the fourth time we’ve played them this year and they’re a good team so we know we’re going to be put up against it.

“We haven’t beaten them convincingly this season and they have a lot of threat there too, so we won’t be naive going into the game thinking we’re just going to walk over them or win it easy, because Kerry are a good team.”

The effort has been there for Antrim since they began this longest of seasons a year ago when they took part in the Conor McGurk Cup.

Under Darren Gleeson’s guidance, Antrim have looked a different proposition than in previous years with a strong panel of players all champing at the bit to earn a starting place.

There has been an obvious buy-in to what the Tipperary man has tried to build, bringing a modern style of play to the Antrim set-up that has paid dividends as evidenced by their high scoring ratio in games.

No longer are a couple of players relied upon for the scores, but that burden has been shared throughout the field and that has been the plan all along.

McCann has paid tribute to the Portroe man and the backroom team who have also brought expertise to the set-up and with all pulling in the same direction, Antrim have enjoyed as good a season as there’s been in many years.

“I think the professionalism he has brought into the set-up plus maybe a more modern aspect of the game and how the structure of hurling has moved in the last few years has been massive,” said the Saffrons’ skipper.

“Look at Waterford: the way teams set-up now is quite different from the standard ‘hit the ball up and down the field as hard as you can’. The formations and styles of hurling we’re adapting a bit more to than we would have.

“That cobbled with a good team he’s brought in around him has been massive as the team has really grown. You can see that on the pitch as we have come on leaps and bounds because of the set-up that’s there too.

“I think one of the games we’ve had 10 scorers and Neil (McManus) hasn’t featured since the League final.

“It’s good as that’s something we’ve struggled with in the past - getting scores on the board and a range of them with two or three each, so we’re happy with that aspect of it as the team has grown into it.”

He continued: “The work the lads have put in on the training pitch and then translating that onto match days has been really good to see.

“The conditions at this time of year don’t allow for anything other than tough, hard work. The lads have all stood up and doing it, so we’re happy with that.”

They will be required to stand up to the Kerry challenge on Sunday and with the players knowing each other so well at this stage, it’s only natural that some personal rivalries have developed. No quarter will be asked or given, but there can be no letting that cloud the bigger picture.

In a League meeting last year, Antrim finished with 13 players and lost by two, highlighting the need to not get drawn into anything untoward and the captain has stressed the need to retain discipline and composure throughout.

“I think if we go back to games of the past when we’ve lost players it has hurt us,” he agreed.

“If we can keep the players doing what they are being asked to do and keep their discipline, it will play a huge part in it.

“It’s going to be a big challenge but we’re looking forward to it. It could go a point or two either way so we will just hopefully get over the line - whatever it takes.”

It is the dream of any hurler to climb the steps of the Hogan Stand and collect silverware on All-Ireland final day.

McCann has already lofted the Division 2A league cup over his head this year and he is keen for a repeat.

However, the mild mannered Creggan man is not getting carried away by the prospect of doing just that, but instead insists the only focus is winning the game and rounding off what will be a monumental year for Antrim.

“It’s not something I think about too much,” he countered.

“I just try to get myself on the pitch and focus on the performance, but that would be great for anyone from Antrim, no matter who it is.”

The county captain has led from the front throughout the year and in previous seasons so it will undoubtedly be the same this weekend. McCann has found his goal touch this term, but it’s a golden year he is more concerned with.