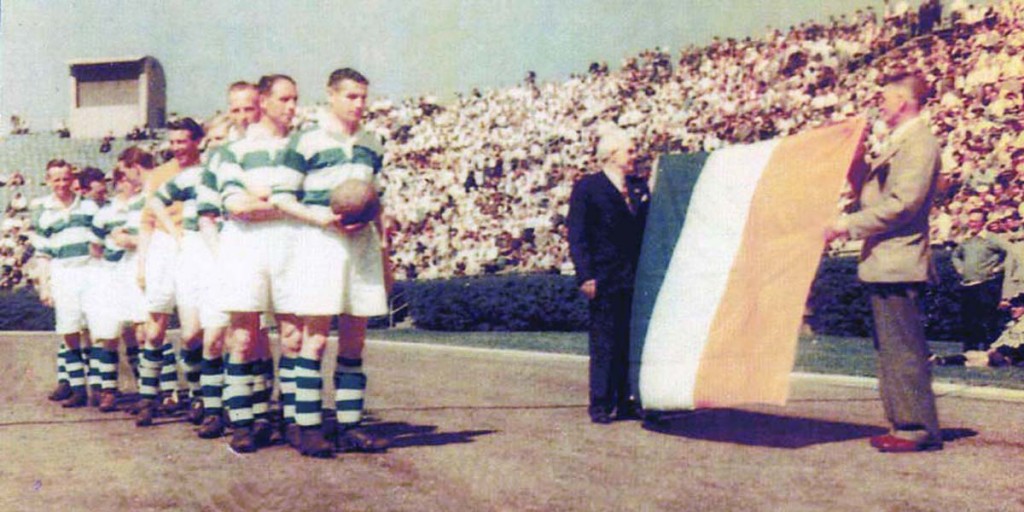 WHAT’S IN A NAME?: The Belfast Celtic team that toured the USA in 1949

PLANS for Sport and Leisure Swifts to change their name to Belfast Celtic suffered a setback yesterday with the news that the Belfast Celtic Society has voiced their opposition to the move.

The Glen Road Heights outfit announced its intentions to change their name in a statement issued on social media earlier this month, with the aim of “improving the club and improving the footballing prospects for young people in West Belfast”.

However, despite approaching the society prior to making their announcement, Sport and Leisure’s plans have been met with opposition from the Belfast Celtic Society.

Having distanced themselves from the name change in a previous statement, primarily due to their status as a charitable organisation, the Belfast Celtic Society held a full committee meeting yesterday morning (Wednesday) to discuss the matter.

“The Belfast Celtic Society again reiterates that it had no involvement in this venture,” a spokesperson said. “The Society was only made aware of the development 48 hours before the public announcement.

“The Society was surprised by this announcement and the reaction received from both our membership as well as the general sporting public has been overwhelmingly negative.

“Since its foundation almost two decades ago, the Society has been approached on more than one occasion to endorse and support a range of commercial enterprises with the intention of exploiting the name of the club for commercial gain.

“Over this period, our standard response has been that this is contrary to the constitution of the society which is regulated by the Charity Commission.”

The Society also expressed its concern that the families of the former players of Belfast Celtic were not consulted prior to the announcement.

The Belfast Celtic Society also claim that the trademark registered by businessman Anthony John Bonnar earlier this year is a new company and is not linked to the old Belfast Celtic Football and Athletic Company.

However, speaking to the Andersonstown News, Sport and Leisure chairman Jim Gillen said that while he was disappointed the Belfast Celtic Society hadn’t supported the name change, he stressed that the club will be moving forward with their plans regardless.

“We have everything in place. As of yet, the IFA (Irish Football Association) has yet to rubber-stamp it,” said Gillen.

“We have to go ahead with it. We informed them (the Belfast Celtic Society) and we spoke to a few members. They seemed to think it was a good idea. They’ve obviously put it to their full committee and they have given a different outlook. There’s nothing we can do about that other than trying to change their mind.

“We would like to go ahead with their blessing and indeed the blessing of everybody in West Belfast. We’ll stay positive on what we are trying to achieve.”

Sport and Leisure Swifts are set to play their first game of the new season against Armagh City on Saturday, August 18 and are hoping the name change to Belfast Celtic will be approved by the IFA before that fixture.