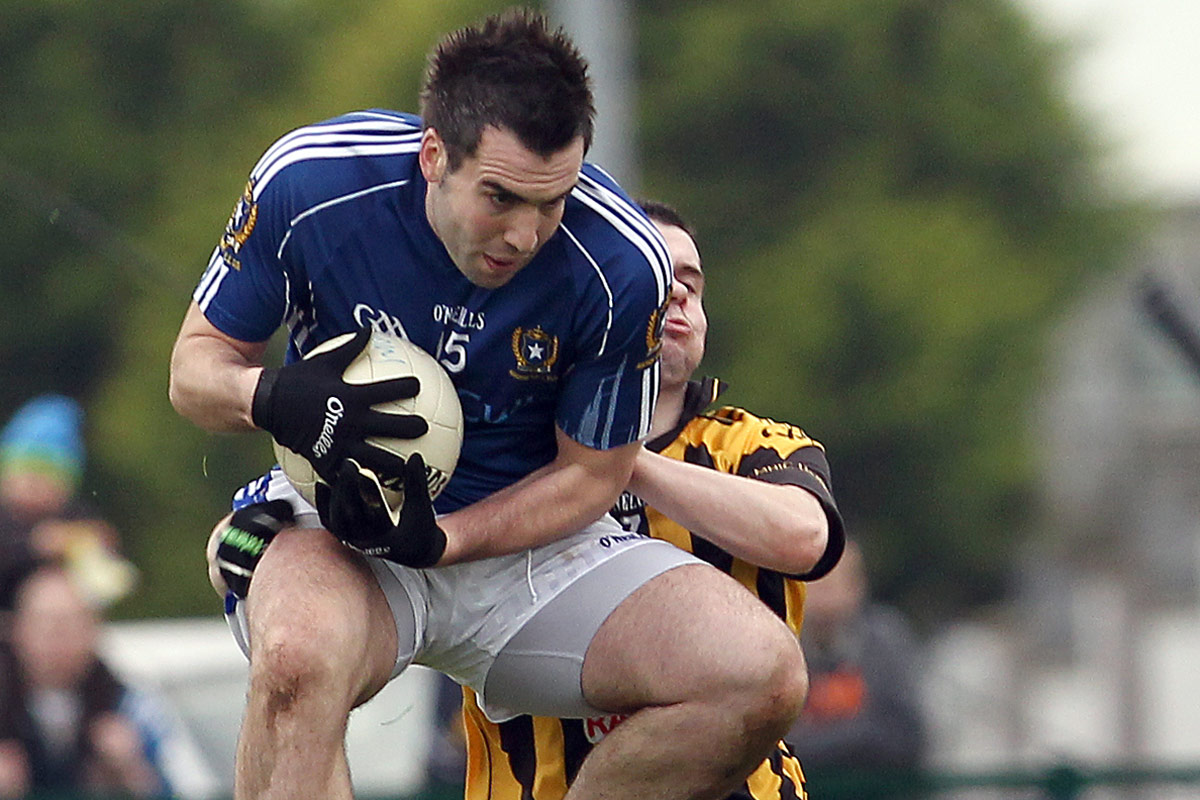 ANTRIM finals are nothing new to St Gall’s. When the De La Salle Park club take to the field on Saturday night they will be trotting out for the tenth time in eleven years on finals day. While this brings its own pressures, the mood around St Gall’s has been considerably more relaxed this term than last.

Free from the tag of defending All-Ireland champions, the Milltown Blues seem to have rediscovered a spark but that doesn’t mean they have gotten bored of winning – far from it.

While Saturday’s final could well be the last football final at the ‘old’ Casement Park, Kevin Niblock is hoping there are many more final appearances for his club as the stadium’s face changes in the coming years.

“We are getting used to it at this stage but hopefully we can keep going and we get over it,” said the 25 year-old.

“It’s going to be a tough one this year and much tougher than the last few years definitely. I suppose last year going in as All-Ireland champions – especially that Crossmaglen game (in the Ulster Championship) – there was a lot more attention on us.

“This year there is less focus and it because that was 16 months ago and everything has died down a bit so we are looking to get back on track to that again.”

Back on track they certainly are. Last year the ‘Azzuri’ laboured to a first round win over Moneyglass but there were no such issues this time. They easily accounted for the South West men in round one this season before seeing off St Brigid’s in the semi-finals.

The up-and-comers from South Belfast were put in their place in the opening quarter, as Niblock and his team mates were actually able to take their foot off the gas.

What was perhaps even more impressive was the impact made by players who were given their chance to shine this year. Michael Pollock – who didn’t feature against Moneyglass – came in and tortured the St Brigid’s back like hitting five points.

Karl Stewart has been scoring for fun in the two Championship games played. David Cummings and Darren Harbinson have forced their way into the team and have played as if they have been there for years.

Competition for places on the starting 15 has never been greater at De La Salle Park and Niblock reveals that nobody can take their place for granted any longer.

“We have a lot of options and everybody knows that as well. I suppose some of the boys who were certain to play over the last number of years are now looking over their shoulder,”said Niblock.

“There are more boys now who are very close to the team and to be fair to Lenny (Harbinson), he has picked teams that go on form and players who have been doing well in training to suit other teams.

“There have been hard decisions to make because before matches this year we (the players) have been trying to call the team but there are not many who get it right.”

With confidence high and performances impressive, many will install St Gall’s as heavy favourites for Saturday’s final.  However, what has made the Milltown men such great champions is their refusal to underestimate any opposition and this time will be no different.

Niblock admits that he and his club mates will be facing a highly motivated group of players who will be out to make amends for previous final defeats.

“We are definitely not thinking past Saturday and a big battle against Lámh Dhearg. They have gone really close to a county title over these past few years and they have been unlucky,” said the Antrim forward.

“We have beaten them in a few finals over the years so they will need no motivation. We know what they will be saying to each other and you can’t fault them.

“There aren’t many clubs who would keep coming back because it is hard when you lose a few finals to come back.”

“They have been getting stronger every year and from watching them this year myself I can see they are good and have some good young players coming through.

“They will probably come into the match as underdogs and will be loving that.

“They have already beaten Cargin and there is no bad team who will beat Cargin in the Championship so they are going very well and have a lot of momentum. Hopefully for us they won’t have enough.”

Both sets of players will know each other well going into Saturday’s game having shared dressing rooms on county, university and school teams.

While some may see this as an easy victory for St Gall’s, Niblock argues that the game will be closer than many are predicting.

He is expecting a tough examination from Lámh Dhearg but is hopeful they can do enough to get over the line.

“There are a lot of their players we will have to keep an eye on, maybe more than what we have had to do all year,” added the former Colleges All-Star.

“They have a lot of scoring options, not just Paddy (Cunningham), but they have three or four forwards who can score freely from play.

“We have been playing well and training has been going well. Up until now we can have no complaints because things have been going as planned and hopefully they keep on going that way.

“I would like to think that any match we go into we have a chance but definitely we are very wary of Lámh Dhearg this year.  They have been playing well and I don’t think there will be more than three points either way in it at the end – it will certainly be a close game.”