CLIFTONVILLE moved into second place in the Danske Bank Premiership after Ryan Curran’s early strike was enough to see off 10-man Glentoran at the Oval in Sunday’s lunchtime kick-off.

Curran volleyed home the only goal of the game, but Paddy McLaughlin’s side should have had an easier day at the office had Rory and Ronan Hale converted late in the first half. The crossbar also came to the Glens rescue, denying Ronan Doherty.

The hosts would end the game with 10-men as Shay McCartan was red-carded for a lunge at Rory Hale and thereafter Paddy McLaughlin’s side held out to leapfrog the Glens into second place in the table.

McLaughlin was full of praise for his sides forward play, shape, and defensive work over the course of the 90 minutes.

“The boys were excellent, and it was a brilliant goal from Currany to score the winner,” acknowledged McLaughlin.

“We had numerous other chances to make it a wee bit more comfortable, especially in the first half. We’d a brilliant effort when Ollie [Ronan Doherty] hit the crossbar in the second half.

“Our forward play was fantastic, the shape of the team was fantastic and the defensive block that we put on, right throughout the ninety minutes was superb. It’s a good all-round performance.

“We know that coming to Glentoran, they’re a good side, one of the top sides in the division. Coming to their place, keeping a clean sheet, and getting three points takes a lot of hard work. Fair play to our boys, they deserve all the credit in the world.”

🔴 Just checking in to make sure we're all still definitely having an absolutely great day? pic.twitter.com/kIZLU0vy8X

McLaughlin opted to name the same team for the third game running, but there was a shock in the Glentoran line-up as Conor McMenamin was deemed fit to start eight days after suffering a suspected broken leg.

Glentoran had the first opening at the Oval when Rory Donnelly picked out younger brother Jay. He took the ball past Jamie Robinson at the bye-line and cut the ball back into the six-yard box, but nobody was in the area to take advantage.

At the other end, a mistake from Paddy McClean allowed Joe Gormley an opening that was quickly shut down by a sliding tackle from Marcus Kane at the expense of a corner.

It was from the set-piece that the opener arrived. Rory Hale’s corner was half cleared by McClean, only as far as Ryan Curran who thumped an unstoppable volley past Aaron McCarey for his 10th goal of the season.

McCarey denied Ronan Doherty from doubling the lead on 18 minutes and the resulting corner just evaded contact with Jamie Robinson.

The Glens were forced into a double switch early on as Hrvoje Plum and Conor McMenamin were forced off with injuries.

Frustration grew as the hosts thought they had levelled when Jay Donnelly touched home Shay McCartan’s goal-bound shot, only for the offside flag to cut short the celebrations.

Donnelly was denied by Gartside a few minutes after Ronan Hale sent a dangerous free kick from range over the top.

Cliftonville had two glorious opportunities to extend their lead before the break. Luke Turner burst forward and picked out Rory Hale in the six-yard box, thought he skewed the chance and shot wide.

Then Chris Gallagher nipped in and won possession back, he fed Joe Gormley who opted to slid in Ronan Hale, but again the opportunity went abegging.

At the other end, Jamie Robinson dithered in possession and Jay Donnelly nipped in, though Gartside blocked with his leg and his side went in with a slender advantage at the interval.

After a lively opening half, the second period was a bit of a slow burner. Just after the hour-mark a flick on from Ryan Curran fell nicely to Ronan Doherty whose effort crashed off the underside of the bar with Aaron McCarey beaten.

A few minutes later Jay Donnelly raced onto a through ball into the area, but Nathan Gartside was quickly out to smother.

With little over a quarter of an hour remaining the Glens were reduced to 10 men. Shay McCartan caught Rory Hale with his trailing foot, right in front of referee Lee Tavinder and he had no hesitation in brandishing a red card.

The 10 men pushed for the equaliser and went close through an overhead kick from Marcus Kane that dropped inches past the post.

Kane then whipped in a deep cross that substitute Terry Devlin headed wide from within the six-yard box.

Mick McDermott’s side were unable to salvage a share of the spoils and fell to their first home defeat of the campaign and dropped beneath Cliftonville in the league table in the process. 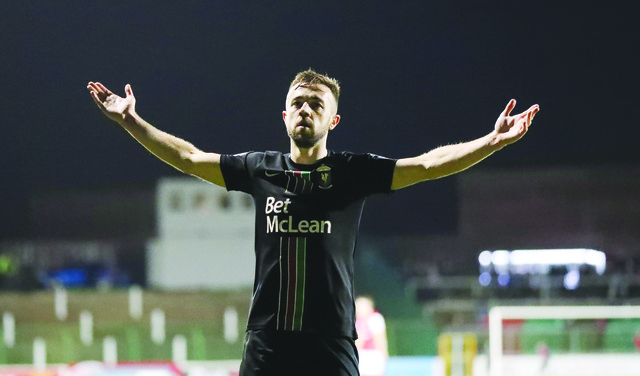 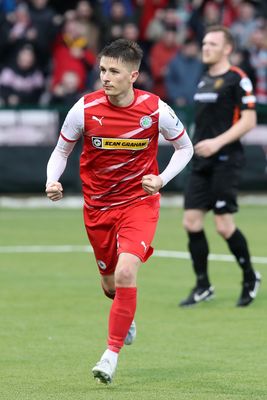 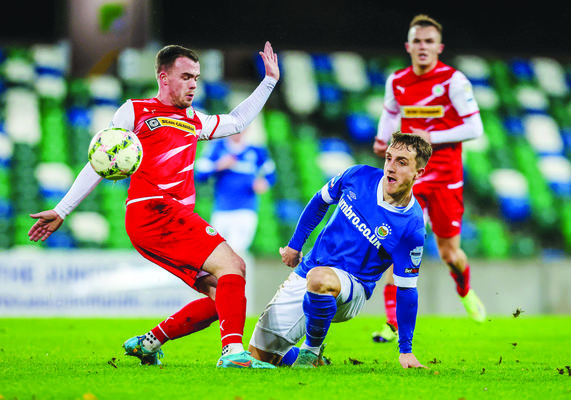