Professional bow for Agyarko-Hynes in Essex this Saturday 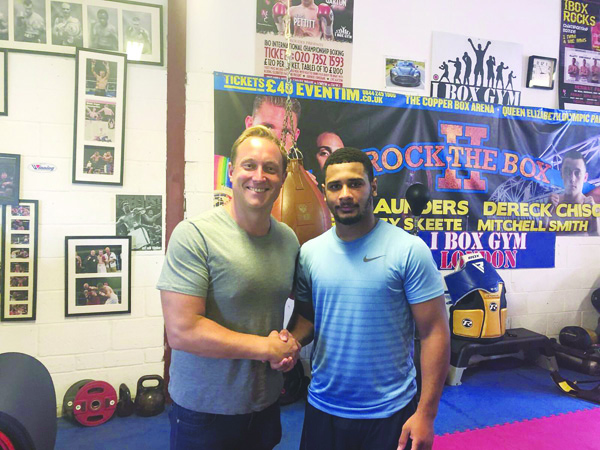 CAOIMHIN Agyarko-Hynes makes his professional bow at the Brentwood Centre in Essex on Saturday night as the former Holy Trinity amateur begins a new chapter in his boxing career.
It was officially announced last month that the 21 year-old had penned a deal with promoter, Frank Warren and he has based himself in Bromley, South London where he is trained by Al Smith.
With a fine amateur background, many felt the West Belfast man’s fighting style would be perfectly suited to the punch-for-pay code and having shown glimpses of what is to come in the World Series of Boxing (WSB) earlier this year, he jumps straight into a six-rounder this weekend with the opponent yet to be confirmed.
“I’ve been out of the ring since April so I’m excited to get back in there ,” he said.
“Going straight into a six-rounder shows that my team has confidence in me because that’s what they offered me rather than me saying I wanted six rounds. I jumped at the chance because it gives me more time to showcase my skills.
“The WSB was five rounds even though I ended up winning in the fourth, but it was a good experience of the pro life.
“You were fighting without a headguard or vest and using pro gloves. That experience told me I wanted to go pro straight away and I’m happy with the decision.”
Linking up with Warren, who also promotes fellow Belfast fighters, Carl Frampton and Paddy Barnes should see the middleweight hopeful get the right fights at the right time and on the big stage.
Of course, a slot on the December 22 Josh Warrington v Carl Frampton card in Manchester would be ideal, but will just be happy to stay active and expects at least six fights over the next six months.
“I always knew that when I turned over, I wanted to be with a promotional group and a management group,” he explained.
“Most would just manage or promote, but I wanted that platform and lucky enough, Frank got in contact. We sat down and everything went well, so I was pleased with that side of things.”
The latest in a long list of professional boxers in his home city, Agyarko-Hynes comes along at a good time with Belfast one of Europe’s leading fight cities and he is hoping to write his own chapter in what is a golden era.
While many expect big things of him, the affable Agyarko-Hynes says he isn’t too concerned about the hype train, but instead is happy to keep his head down and work hard in order to let his boxing do the talking this weekend and beyond.
“Boxing in Belfast is booming at the minute, especially in the professional ranks and I’m glad to be a part of it,” he added.
“You look at James Tennyson fighting for a world title this week in Boston, Mick Conlan fighting out in Las Vegas and I’m making my debut on a good card, so I’m excited to be a part of it.
“There is always going to be pressure on when you’re expected to do well.
“Making my debut on a good card and the talk of how good an amateur I was – I don’t focus on that.
“I just focus on my performance because the expectation can get to some boxers. I just want to perform well on the night.”