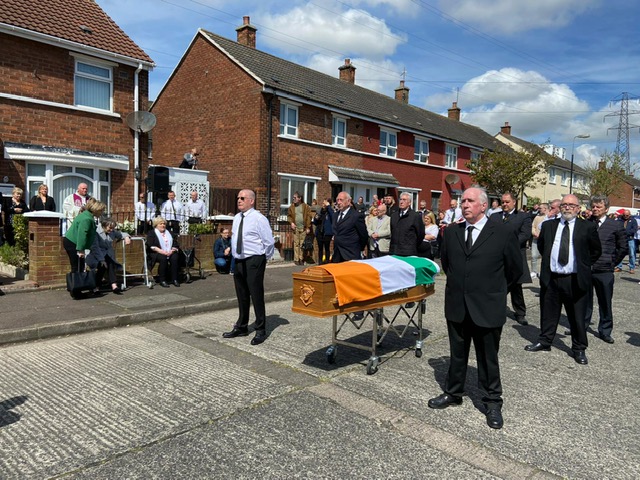 LAID TO REST: Jim Scullion led IRA prisoners in the cages of Long Kesh in seventies

Hundreds of people turned out for the funeral of lifelong republican Jim Scullion this week.

The 78-year-old passed away on Saturday following a long battle with Alzheimer’s.

While making efforts to maintain social distancing, mourners lined the streets of Turf Lodge as Jim’s tricolour-draped coffin made its way to Milltown Cemetery.

Arrested in 1972 for his part in an IRA robbery of a Hughes’ Bakery production factory, Jim was sentenced to 12 years in prison and would go on to become OC (Officer Commanding) of the republican prisoners in Long Kesh.

After being released in 1978, he rejoined the IRA and remained active for many years.

Although originally from the Short Strand, Jim was also a proud member of the Turf Lodge community, having moved to West Belfast as a teenager. Belfast National Graves Chairperson, Joe Austin, who delivered Tuesday’s funeral oration, told how Jim would regularly visit Ballymacarrett at least once per month “ “in case he lost the Short Strand accent.”

Joe paid tribute to Jim’s tireless activism, describing the “instrumental” role he played in the 1985 election of his lifelong friend and republican stalwart Lily Fitzsimons, who passed away earlier this year.

“He was good republican, he was a thinking republican, and when push came to shove he was loyal to the IRA, and certainly to the memory of the IRA,” Joe said.

Paying tribute, local Sinn Féin Councillor Mickey Donnelly said: “One of the memories I had of Jim growing up in Turf Lodge and living round the corner from him was seeing Jim smoking a pipe. As a child growing up, the only people I ever saw with a pipe were Gerry Adams and Jim.

“My thoughts are with Mary and the wider Scullion family at this sad time.”

So fitting on the anniversary of one Republican legend Bobby sands. that we lay another one to rest, My uncle Jim scullion. A great send off and tribute was paid to him in Ardmonagh Gardens today.https://t.co/nNLBz5ZDBj

In a statement, the Irish Republican Felons Association said: “It is with deep sadness that we learned of the death of our comrade and friend Jim Scullion who died early this morning (Saturday).

“We offer our deepest condolences to his wife Mary, his sons, daughters, Gerry and to the Scullion family.

“May Jim rest in peace and may his soul rest with the heroes of Ireland.

Gort na Móna GAC stated: “The committee and members of Gort na Móna would like to extend our condolences to all of the Scullion family on the death of Jim Scullion.”