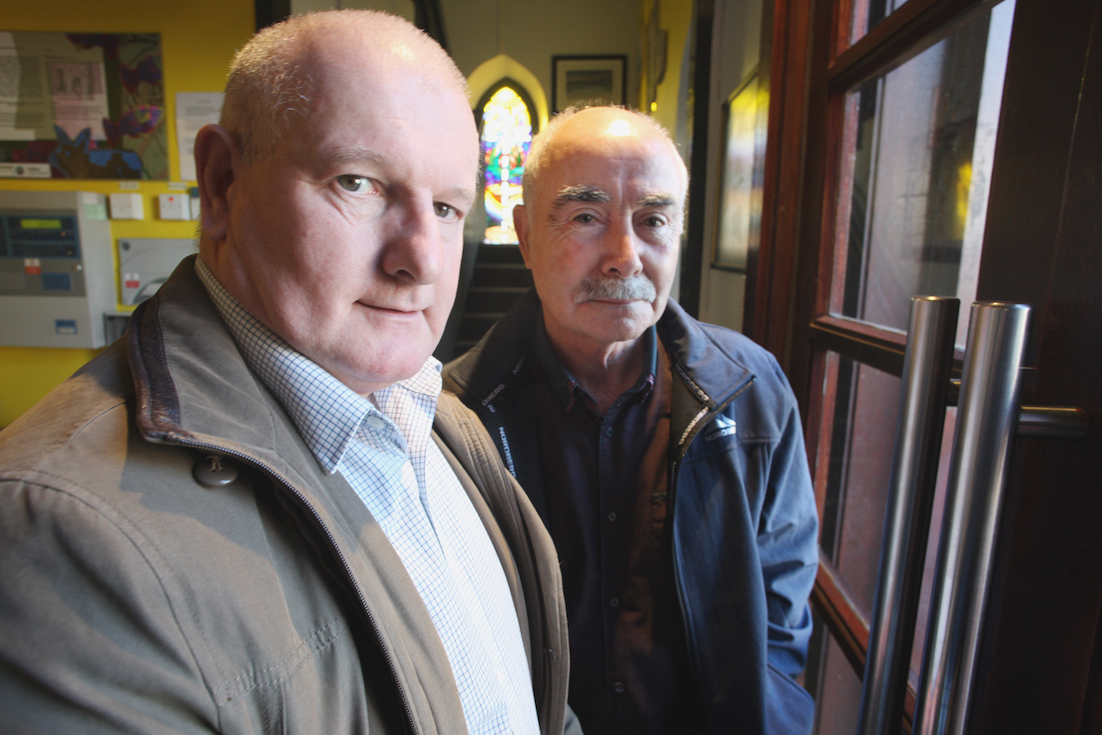 NOT FORGOTTEN: Brian Quinn and Frank Tierney, a bus driver for Casey’s, whose story is told in a new book to be launched on Sunday to remember the 1975 atrocity

A TRIBUTE afternoon is to take place in Sailortown this weekend to remember two men who died in a UVF sectarian shooting, 43 years ago.
Gerard ‘Coke’ Grogan, 17 and Thomas ‘Tucker’ Osborne, 18 were killed in the shooting at their workplace, Casey’s Bottling Plant in Millfield on October 2, 1975. Marie McGrattan (47) and Frances Donnelly (35), daughters of the owner Sam Casey, were also murdered in the incident.
On Sunday afternoon, a commemorative plaque will be erected at St Joseph’s Church in Sailortown at 3pm in memory of Gerard and Thomas who grew up in the area.
A tribute book of testimonies from family members and friends will then be launched in the Mission to Seafarers Centre.
The book, entitled ‘Ifs and Buts and the Toss of a Coin’ is a collection of humble and human stories about Thomas and Gerard as told by their friends and heartbroken family members.
Brian Quinn, who has helped organised the event with the Docksiders Senior Men’s Group and friends of Thomas and Gerard, is hoping Sunday will be a fitting tribute.
“It will be a nice day. We are pleased that 43 years after their brutal murders they will be publicly recognised in a respectful way.
“Thomas and Gerard’s friends were all around the same age, lived a few streets apart, schooled together, worked together and in a special childhood bond, both were baptised in St Joseph’s Church.
“We never got the chance to grow old with Thomas and Gerard. The least we can do now is to pay proper respect and where better to site the tribute than St Joseph’s in Sailortown.”
The book also includes a tribute story to Stephen (Mitch) Begley who is widely regarded as the fifth victim of the Casey’s atrocity. On the day Gerard was laid to rest, his friend Mitch decided to hop on the back of a lorry after the funeral which was heading back into town. As the lorry approached Millfield, Mitch lost his balance and fell from the lorry and was killed.
The public are asked to assemble at St Joseph’s Church on Princes Dock Street on Sunday (October 21) at 3pm.